Share All sharing options for: Notre Dame/Tulsa: The "Smoke"

This is a game most of us would like to forget:  it was after the Navy debacle, after the Declan Sullivan tragedy, Crist got knocked out for the season, and involved a heart-breaking loss to a Conference USA team (albeit a good one – some people forget this team won 10 games and dismantled Hawaii in their bowl game).  Unfortunately, I was in attendance and sat high up in the end zone section where Rees was intercepted.  To say I was unhappy at the end of the game would be an understatement.

But life goes on and breakdowns need to be written.  My original plan was to write about the trick plays Kelly busted out for this game: the hook-and-lateral play that gave the Irish their second touchdown and the fake punt in the second quarter.  But the goal for these breakdowns is to educate the readers on the finer points of Kelly’s offense and you don’t exactly learn a lot looking at trick plays.  Luckily, Mike Mayock pointed out a couple of interesting decisions by Tommy Rees.

Here’s a play from the third quarter. 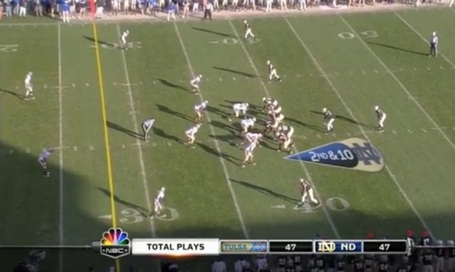 Rees is lined up in the pistol with Cierre Wood behind him.  Michael Floyd is out wide to his left and Robby Toma and TJ Jones are to his right. 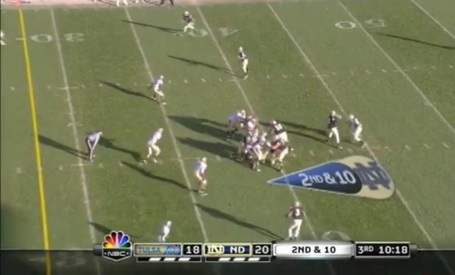 This play is clearly a run.  You can see Chris Stewart pulling from his guard spot and Wood running up to take the snap.  Longtime readers will remember me mentioning fake bubble screens on some of Notre Dame’s running plays.  Here, Tulsa blitzed one of their middle linebackers at the snap.  Rees read it and threw it out to Toma on the bubble screen. 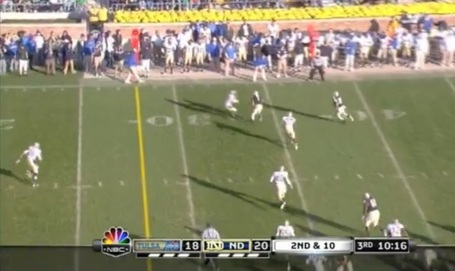 Jones gives him a block and Toma gains 16 yards.

Mayock called this the "smoke" but I’m sure every coach has a different name for it – quick out, hot read, quick throw, whatever.  It was the quarterback deciding at the snap that he had a better chance at success throwing the bubble screen than handing it off.  This is a type of constraint play that punishes the defense for overplaying the run.  If the defense loads up the line, Rees can burn them with the bubble screen, forcing the defense to stay back and respect it in the future and hopefully opening up running lanes.

Rees did this a couple other times, too.  Here, the Irish line up in the same formation as before. 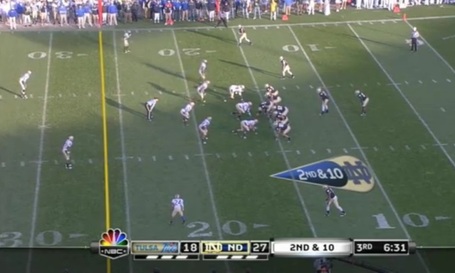 Look at how much room the DB is giving Floyd.  He’s about six yards off of him and the safety is twelve yards out.  Instead of throwing the bubble (which Toma does still go out for), Rees throws it out to Floyd.  Floyd has about six inches and 40lbs on the Tulsa corner, so probably nine out of ten times Floyd picks up 8+ yards.  However, this time, the corner makes a nice play and drops him for a loss of three.  It was still a good call by Rees, though.

Finally, here’s the Irish lined up the same way once again. 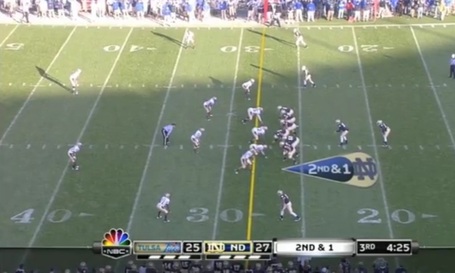 The OLB covering Toma creeps down to the line right before the snap and blitzes, leaving a ton of open space in front of Toma. 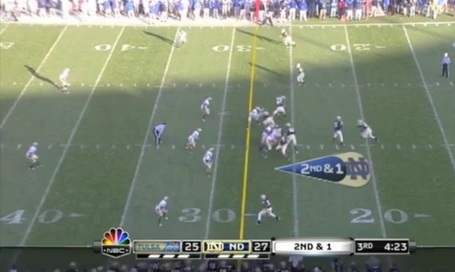 Once again, Rees throws the smoke and hits Toma on the bubble screen for 11 yards.

I found this extremely interesting because I don’t remember Dayne Crist ever throwing these “smokes.”  That isn’t a criticism of Crist; maybe those types of plays weren’t called very often when he was in and maybe there was never a reason to throw the bubble when they were called*.  But I do think it’s impressive to see a freshman quarterback come into a game he wasn’t even supposed to play in except for maybe garbage time at the end and have the confidence to make those reads at the line instead of just handing the ball off like he was told.  This is especially impressive when you consider where Rees was a few months before in the Michigan game.  When he was pressed into duty against the Wolverines he looked like he had no idea what he was doing.  Against Tulsa, he completed about 60% of his passes and threw four touchdowns.  Granted, it was against the worst pass defense in the country and he threw three interceptions, two of which were at, ahem, unfortunate times.  But, despite the loss, Rees at least showed he was capable of playing under center for the Irish.

*And I’m far too lazy to go back and check.