I have a confession: I love option football, especially the flexbone.  You hear NFL coaches brag about how thick their playbook is (definitely not compensating for something, I’m sure /winkwinknudgenudge) or how a pro-style system can be too complicated for a college quarterback, so it’s refreshing to see an offense where a team can base everything around a small number of plays and run them over, and over, and over, and then over some more, and be successful.  It’s also a great underdog strategy since most teams never face this type of offense and struggle to defend it.  It’s why Navy and Air Force win eight or nine games a year.  Army, for some reason, made the ill-fated decision to go pro-style several years ago and the bottom fell out on their program.  They switched back to an option-based offense and two years later they won a bowl game.  So the point is, Navy’s offense may appear simple ("All they do is run the ball!  Why can’t they stop it?") but is actually quite difficult to stop to a team that doesn’t see it much.  Probably not by coincidence, Notre Dame has gone through four different defensive coordinators in the last five years and has lost three of the last four to Navy.

In theory, Bob Diaco’s defensive game plan wasn’t terrible; he just had no idea how to utilize the middle linebackers.  Throughout the entire game, Notre Dame lined up like this on defense: 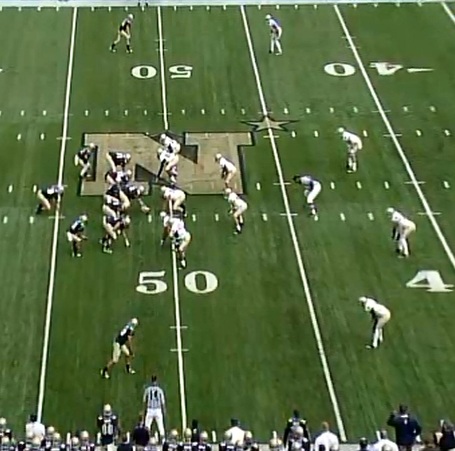 The outside linebackers came down to the line of scrimmage and presented a five man front to Navy.  As I talked about last time, when Navy ran the Veer, Ricky Dobbs read one of the defensive ends as the first read and the outside linebacker as the second read.

First, the defensive end would crash and take away the FB dive. 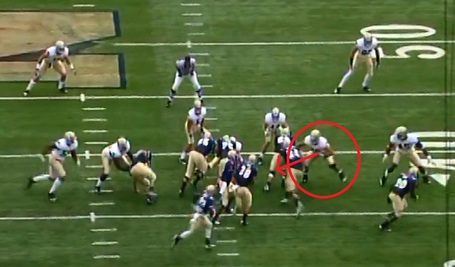 Here, you can see Ethan Johnson clearly attacking the fullback.

Next, the OLB would plant himself squarely in front of the QB to force an early pitch. 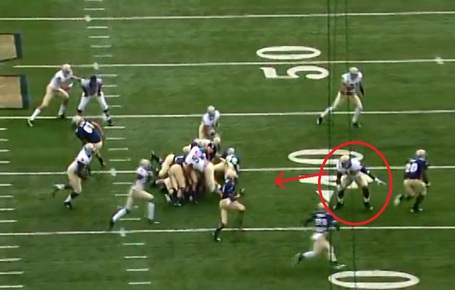 Because the slotback was coming from behind the QB, the pitch was taken behind the line of scrimmage.  He would then be tackled by…

This is where everything fell apart.  There was no one covering the pitch man.  A safety would come down, but the playside slotback would simply block him.  Sometime, the OLB would follow the pitch man, but there still wasn’t anyone to stop the QB. 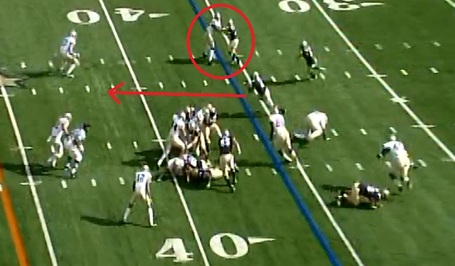 And where were the middle linebackers?  They were busy getting blocked as they tried to fill a gap no one was running through.  The Birddog explains:

…They thought that Navy’s fullback ran through the A gap. And that was their plan– to send the inside linebackers crashing into the A gap that nobody was running through. That just made those LBs easier to block as either the fullback or quarterback ran right by them and into the secondary.

This presented another problem.  Every so often, the DE would play the QB instead of the FB, giving Dobbs the fullback give read.  With the linebackers running straight into blockers for some reason, that left a lot of room for the fullback to run through (about 210 yards worth of room).  Watch the first play in the YouTube clip, the 54 yard run by the Navy fullback, Alexander Teich.  Kapron Lewis-Moore steps out to stop Dobbs, who hands it off on the dive.  Te’o and Calabrese couldn’t do anything and Teich was off to the races.

Occasionally, Te’o or Calabrese would read the play and follow the pitchman outside and make a nice play. 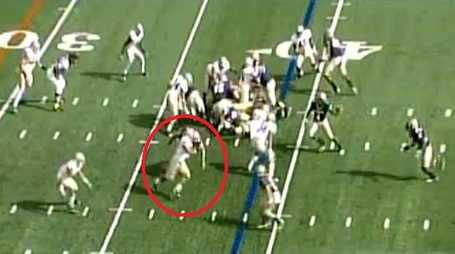 Instead of running straight into a blocker, you can see Te’o stay back and flow in the direction of the play. 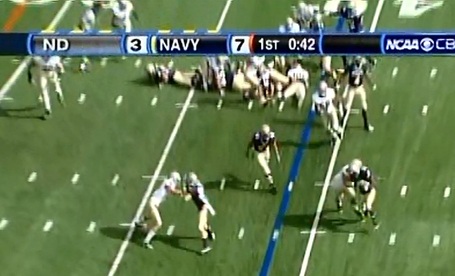 Te’o is athletic enough that he was able to get outside and make a play on the slotback before he could turn upfield.  This was great, except those plays were few and far between.  Te’o or Calabrese would flow on one play and make a nice tackle, and then go back to running into the A gap to be blocked on the next.

In the second half, the coaches mixed things up a bit and started having the DE "squat" when they were read, meaning they didn’t commit to either the FB or the QB.

That’s fine, except they didn’t do anything with the MLBs; they continued to try and fill gaps no one was running through.  And, as I mentioned last week, this just set up Navy’s trap play and led to Teich ripping off even more chunks of yards

So I guess I have to give credit to Kelly and Diaco for at least trying something new in the second half.  Unfortunately, the biggest adjustment they needed to make was with the MLBs.  The scheme took them out of almost every single play, leaving the defense stretched thin and unable to cover the entire field.

Finally, I want to point out one interesting defensive play.  Late in the first quarter, Navy ran a Veer towards Brian Smith, playing outside linebacker.  Look at what Smith does (ignore the yellow circle; that’s from the CBS broadcaster): 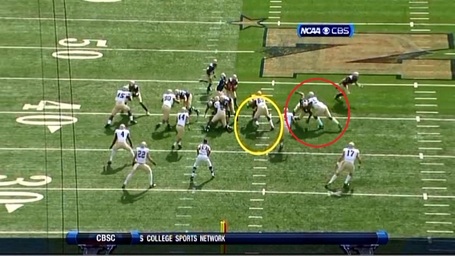 He shoves the tackle as he tries to get by to block Te’o.  Smith is still able to force Dobbs to pitch the ball and Te’o, now unblocked, is able to get out and tackle the slotback for a loss of two yards.  I only saw this once the entire game and who knows if Smith was instructed to do this or not, but it worked pretty well.

In summary, I think Notre Dame’s defensive problems can be attributed to two things:

I really hope Kelly and Diaco learned from this disaster.  It was after this game that the defense really started to make strides and played great the rest of the season, so I think something must have clicked.  I hope next season the team is better prepared to face the Midshipmen.  The offense moved the ball pretty well on the undersized Navy defense, and if it wasn’t for some derp-tastic INTs by Crist, the game could have become an exciting shootout instead of the death-by-fullback it actually was.

EDIT:  One thing I think I neglected to explain is the difference between the A-gap and the B-gap.  The A-gap is simply the gap between the center and guard.  The B-gap is between the guard and tackle, which is the gap the fullback attacks on the Veer.  In the Midline, the fullback hits the A-gap, Navy hardly did that against Notre Dame.  So that's why having the linebackers attack there was futile.  Nothing was happening there.