Welcome, ladies and gents, to my first offensive breakdown post here at One Foot Down.  For those of you unfamiliar with my work, I have been going back through Notre Dame's 2010 season and picking out plays from each game that I found interesting and breaking them down step-by-step.  The purpose is to educate both myself and the readers on this new-fangled spread offense and to also get an idea of how it evolved over the course of Kelly's first season.  I actually started this back in December and my old articles can still be found over at Rakes of Mallow.  Due to what can only be described as laziness, it's currently the middle of July and I'm still only a little over halfway through the season.  The good news for you, the reader, is that posts will be coming weekly between now and the opening game against South Florida.  This post is actually Part II of a series on the game against Navy (Part I can be found here) because I got requests for a more detailed breakdown on Navy's offensive strategy and why it worked so well against the Irish.

So with that out of the way, let's get to the football.

Oh boy, do I have a lot to talk about.  Rather than make this a Master’s thesis-esque post, I’m going to break this into two parts.  In this part, I’m going to discuss the Navy offense and what they used to tear through the Notre Dame defense.  I’ll be borrowing heavily from The Birddog’s breakdown of this game since he knows this offense a lot better than I do, so credit for almost everything in this post goes to him.

First, let’s talk formations.  Navy lined up in a grand total of three different formations the entire game, not counting the kneel-down out of the victory formation on the last play.  There was nothing special Navy brought out for Notre Dame, despite what Kelly said at halftime (more on that later).

There was the plain old Regular Flexbone: 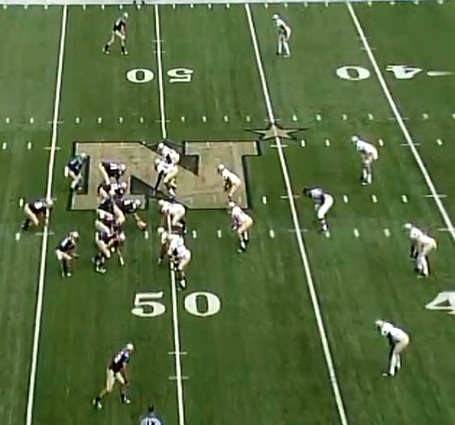 …the Heavy Flexbone, where Navy lined up with an unbalanced line: 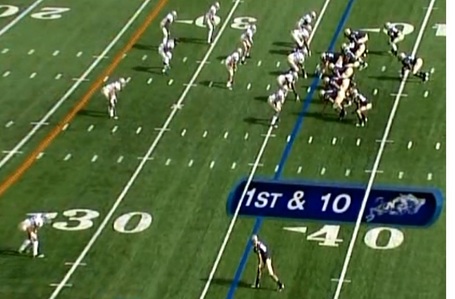 …and the Heavy Flexbone with both receivers on the strong side: 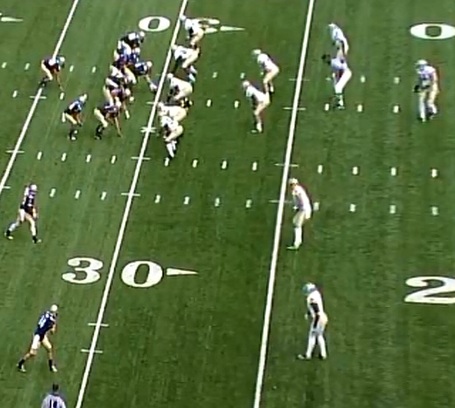 Navy lined up almost exclusively in the Heavy formation in the first half.  The Birddog explains why:

Navy started the game in the heavy formation, with two tackles lined up on one side and a wide receiver in the tackle position on the other side…  Offensive coordinator Ivin Jasper frequently uses the heavy formation when the defense has an inside linebacker with exceptional playmaking ability; in Notre Dame’s case, that would be Manti Te’o. In the spread formation, it’s generally the playside tackle’s responsibility to block the inside linebacker on the triple option, but he might have trouble if the defensive end squeezes him inside. Putting an extra tackle next to him compensates for that by making someone else responsible for blocking the ILB. What it doesn’t do, however, is change the basic mechanics of the play.

Navy didn’t change anything in their reads or blocking scheme; they simply thought they need an answer to Manti Te’o.

Navy’s signature play is, of course, the Inside Veer.  Against the defense the Irish presented, the first read was the defensive end:

Here, Kapron Lewis-Moore crashed the line to take away the fullback dive.  The next read was the outside linebacker playing on the line of scrimmage:

In this play, Darius Fleming stepped in the quarterback’s path, forcing a pitch.  Sometimes, he followed the pitch man, which caused the QB, Ricky Dobbs, to turn upfield: 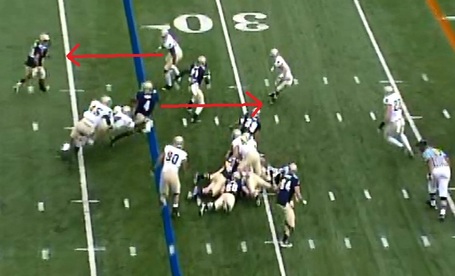 The other option play Navy runs is the Midline.  Now, I thought I counted 10 to 13 (I’m unsure on the exact number) instances of the Midline, but The Birddog claimed they only ran it twice.  Since I’m a n00b to this form of offense, I’ll defer to his judgment, but I’ll still explain what I thought was the Midline.

Here, the DE is being optioned, like on the Veer: 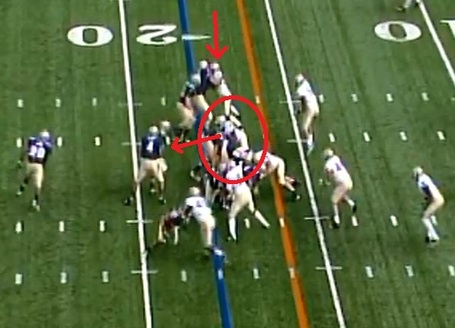 However, if you look under the crudely drawn arrow, you’ll see the OLB is also being blocked.  It appears Navy is going "inside-out" on the optioned player: if he doesn’t crash, the QB hands the ball off and the FB runs inside the DE; if he crashes, the QB steps around him and runs outside of him. 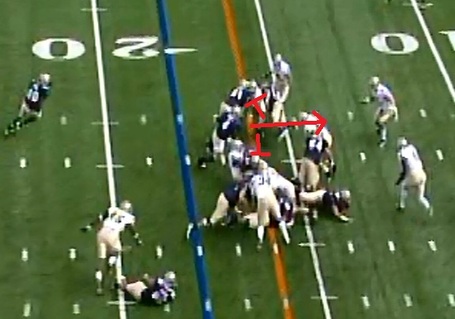 KLM crashed in this instance, so Dobbs cut up through the hole on his other side.

Now, in the traditional Midline, the optioned player isn’t the same as it is in the Veer.  I counted at least two plays were it looked like the nose guard was maybe the optioned player, so those were probably the "true" Midline plays The Birddog spoke of.  But if those plays I just mentioned weren’t Midlines, I would be interested in knowing what they were.

There were four other main plays Navy used.  One was a straight fullback dive used mostly in short yardage situations (sorry, no pictures of that play).  The second play was a toss sweep Navy called when Notre Dame started to bring the safeties inside.

The third play was what The Birddog referred to as "the short trap."  This was run almost exclusively out of the Heavy formations.  The playside DE, who was used to getting read on almost every play, suddenly had an offensive lineman running into him.  The OLB, initially unblocked and expecting the Veer, would plant himself on the line and not penetrate into the backfield.  This made him an easy target for the pulling playside guard, forming a nice crease between the DE and OLB.  In the video below, watch the OLB in both plays stand there and almost watch the FB run by him.

The final play was a response to an adjustment Notre Dame made in the second half.  I’ll talk about the Irish defense in Part III, but Diaco tried using the DE in every possible way trying to shut down the Veer.  In the second half, Diaco had the DE simply stand on the line and react instead of playing either the FB or QB.  And that actually worked… once.  When Navy caught wind of what was going on, they simply called a trap play.  The backside guard pulled and blocked the motionless DE, opening up a huge hole for the fullback.

And, well, that’s about it for the Navy offense.  There were a handful of plays they called once, such as the screen pass that went for their first TD (I could probably write an entire post ranting about how horribly defended that play was), a speed option, a pair of deep passes, and… that’s about it.  Navy came out and played the style of football they’ve been running for years.  I got really upset when I heard Kelly had the team working on the Navy offense back in summer camp and then gave an interview like this after halftime:

Are you kidding me?  They held back on the Veer?  That seemed like an outlandish statement, so I decided to do some scouting to see if maybe Kelly was actually right.  Using a highly advanced scouting system unavailable to normal people*, I decided to watch the Navy/Maryland game to see what the heck Navy was running if it wasn’t the Veer.

I watched Navy’s first three or four plays of the game.

They were all Inside Veers.

Well, that's all for Part II.  In Part III, I'll look at how Notre Dame tried to stop the plays I talked about above.  (Hint:  Not well.)

SHAMELESS SELF PROMOTION:  Follow me on Twitter to catch all of my insightful** thoughts and witty*** musings on all things college football!

*Ok, just people without the internet.