A Preview of the Florida State Offense

Share All sharing options for: A Preview of the Florida State Offense

A lot has been made of the Florida State defense in the weeks leading up to the Champs Sports Bowl. We’ve all heard the numbers: 6th in total defense, 2nd in rush defense, 9th in sacks, etc.

But let’s spend some time talking about the Seminole offense.

Of Notre Dame’s 2011 opponents, Florida State probably most closely resembles the Michigan Wolverines: a pro-style offense with a mobile quarterback. FSU doesn’t utilize EJ Manuel as a runner as much as Michigan, but they do run some option and zone read plays. But while Michigan was more of a spread team trapped in a pro-style team’s body, FSU is much more dedicated to its pro-style base. You won’t see Manuel run the ball 20 times against the Irish, though he is more than capable of picking up yards with his legs.

After the jump, we’ll take a look at Florida State’s base offense.

Florida State is primarily a zone blocking team, so expect to see a heavy dose of inside and outside zone runs. With the problems their offensive line has had this season, FSU runs more outside zone than inside zone because their running backs are fast enough that they can just get to the edge and outrun defenders without having to rely on the linemen holding a block.

Here’s an example of an outside zone run. 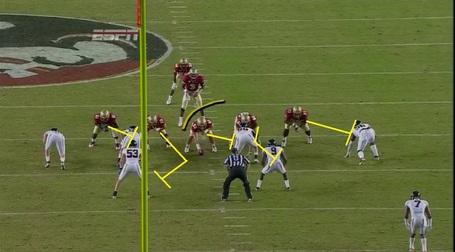 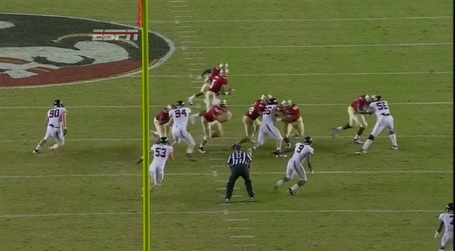 The center makes a great block on this play. He’s able to make the reach block on the tackle and take control of him, allowing the guard to move up to the linebackers.

Notice the backside defensive end has to respect the threat of a bootleg from Manuel and cannot attack the running back. 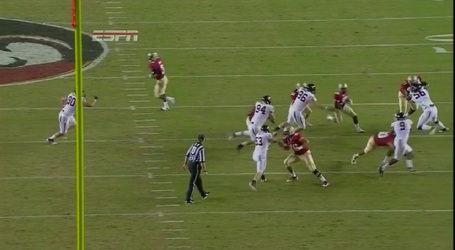 A crease opens up and Devonta Freeman hits the hole. It closes rather quickly and the play only goes for five yards.

This play is the bread and butter of the Seminole run game, so expect to see it a lot.

The key to stopping this play is discipline: the line needs to hold their gaps and the linebackers need to fill any creases. If any player over pursues, a hole will open up.

As a zone-blocking team, the Seminoles don’t run a lot of power outside of the goal line or short yardage situations, but it is in the playbook. 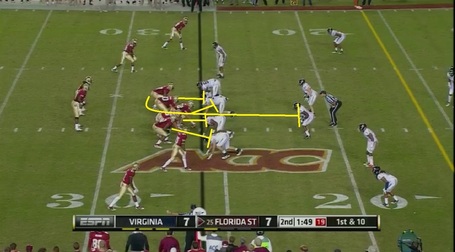 This play reminds me of Notre Dame’s counter play, but there is no counter action on this play. Notre Dame also runs their counter play with a tight end on the line while this play is run with four receivers. 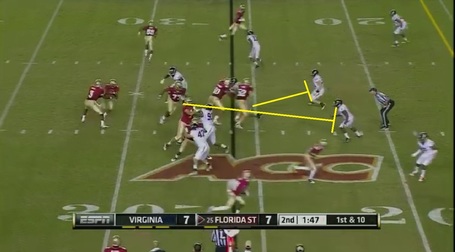 This play could be a read. The backside defensive end is left unblocked, and Manuel turns like he’s reading him. If it is a read, Manuel makes a poor decision because the end clearly crashes on the running back.

The center comes off the double team on the tackle and takes on a linebacker. The pulling tackle takes on the other linebacker. 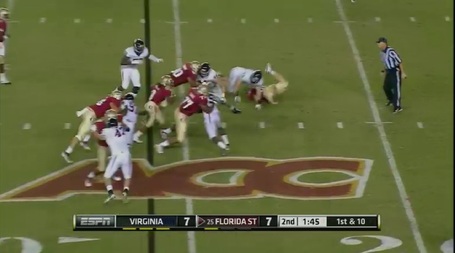 There’s a seam between the linebackers and Freeman hits the hole for 10 yards.

This isn’t a big part of the offense, but it will probably show up a few times, particularly in short yardage situations.

With a big, mobile quarterback like EJ Manuel at the helm, Jimbo Fisher has mixed in some option plays into the offense.

With the outside zone such a big part of the offense, the zone read is natural fit. 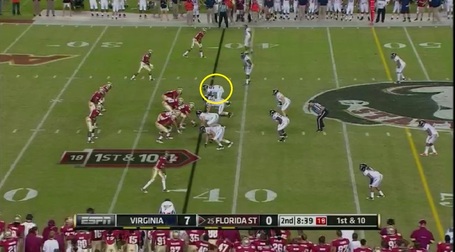 Here’s a zone read with two backs in the backfield. The circled defensive end is read. The other back acts as a lead blocker for the running back. 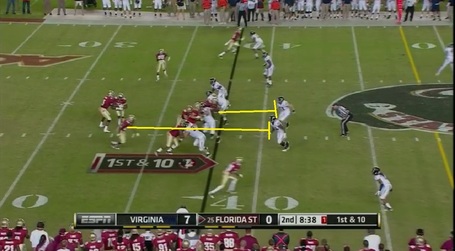 The blocking scheme is exactly the same as it was on the outside zone I highlighted earlier. The lead blocker runs between the offensive tackle and guard to block a linebacker, which allows the playside guard and center hold the double team on the defensive tackle, though they don’t do a very good job. 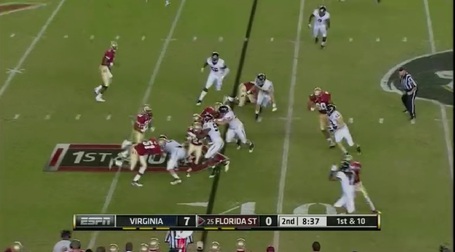 There’s not a whole lot of room, but Freeman still picks up four yards.

Florida State runs the zone read fairly often, but Manuel is almost never given the read to keep the ball. With as poor as FSU’s offensive line is, I would rather take my chances on the outside zone than let Manuel keep the ball.

Florida State also likes to run the speed option out of the I-formation. 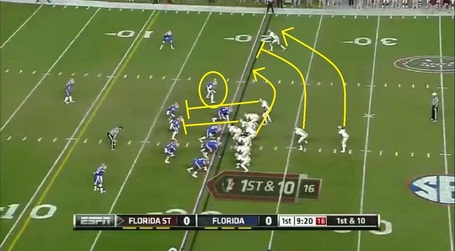 The blocking on this play is also similar to the outside zone, making it another easy addition to the offense.

FSU uses two tight ends and a fullback, so Florida responds by putting eight men in the box. The circled outside linebacker is the optioned player. One of the safeties has crept down is playing about level with the linebackers. The fullback runs out as a lead blocker for the running back on a potential pitch. The playside tight end and guard should block the safety and middle linebacker, but that doesn’t really happen. 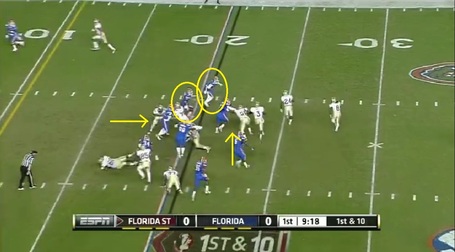 There are a lot of problems with this particular play. The offensive tackle (with the arrow beneath him) gets blown up and gets in Manuel’s way, preventing him from getting upfield. The tight end goes after the middle linebacker, leaving the safety unblocked. That leaves two unblocked defenders to attack Manuel, who can’t get the pitch off and is brought down for a loss of one.

Notre Dame has had plenty of experience against the speed option after playing Air Force and Navy earlier in the season. As long as a safety or linebacker can get out to cover the pitch, the Irish should have no trouble stopping this play.

Finally, the last bit of option play the Seminoles run is the veer triple option out of the shotgun. They seldom run this play, but there’s still the possibility we’ll see it against the Irish. 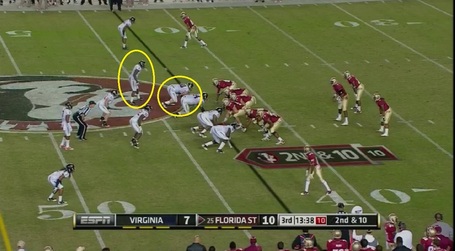 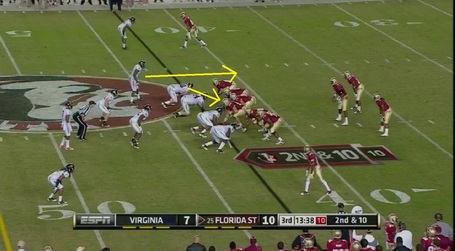 Virginia throws a wrench into this play, however. The defensive end slants hard inside and the outside linebacker comes down to fill his spot. 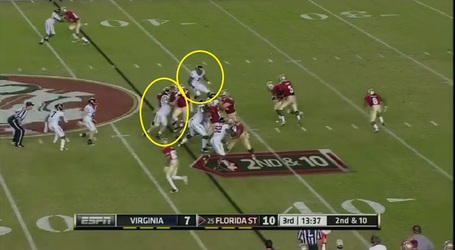 This looks like an easy read. The end has slanted right into the guard, creating a logjam in the line. Manuel sees this and pulls the ball. When he tries to go outside, the outside linebacker is waiting for him. 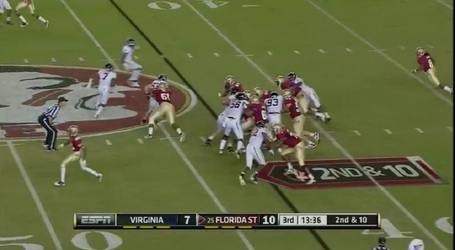 Manuel should have pitched the ball, but instead panics and tries to cut inside of the linebacker. He drags Manuel down for no gain.

Again, this no different than what the service academies ran against Notre Dame this season. The key will be the defenders recognizing the play and covering their man. Against the service academies, the Irish were expecting the triple option, so everyone knew where they needed to be. Against Florida State, the triple option will have more of a surprise factor, so the Irish need to read the play and get where they need to be. The defense did an excellent job shutting down the option this year; the only question is whether or not everyone will be in the right place if FSU does run this play.

The biggest thing to note in regards to the Seminole passing game is their penchant for big plays. As Eric noted yesterday, the Seminoles average 15.6 yards per completion (the Irish average 10.9 ypc). Of the Seminoles’ top five receivers, all but one of them average more yards per catch than Notre Dame’s leader, Tyler Eifert at 12.5 ypc.

One of the keys to Florida State picking up those big plays isn’t EJ Manuel’s arm, it’s his legs. FSU tends to make a lot of big plays when Manuel scrambles out of the pocket and finds a man wide open downfield.

As far as their scheme goes, there’s really nothing out of the ordinary. Jimbo Fisher calls the usual assortment of short throws – screens, slants, etc. – with plenty of shots downfield. This isn’t the Charlie Weis chuck-it-deep-and-hope-your-guy-gets-it offense, but Notre Dame’s safeties and corners will be tested deep.

Notre Dame has been very good at stopping big plays, and it will be important that they continue that on Thursday. Florida State can make a lot of big plays in the passing game and it will be critical that the defensive backs play tight and don’t let any receivers get behind them.

This is not an offense that Irish fans should stay up late worrying about tonight. The Seminoles don’t do anything the Irish haven’t seen already. They have playmakers at the skill positions, but the offense line just isn’t very good. If the Irish can shut down the run and force Jimbo Fisher to call a one-dimensional game, then I like Notre Dame’s chances in this game.

If we see a repeat of the USC game and FSU comes out running the ball down Notre Dame’s throat, then start worrying. Florida State doesn’t have playmakers like Robert Woods or Marqise Lee, but they do have receivers capable of making big plays. It will be a lot harder to stop them if the front seven isn’t stopping the run consistently.