Notre Dame and Turnovers - A Study

Share All sharing options for: Notre Dame and Turnovers - A Study

Turnovers were a problem for the Irish this year. We all know this and would probably like to forget it. I've always been of the opinion that turnovers are mostly a matter of luck, so I decided to take a look at the numbers and see what conclusions I could draw from them.

(All stats come from cfbstats.com and they only go back to 2007. Small sample size warnings go here.)

First, let's just take a look at the top 25 teams in terms of turnover margin over the past five years. 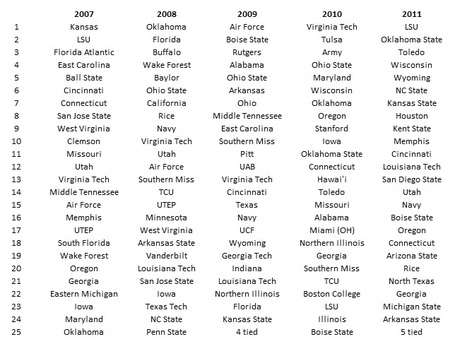 One thing that this table shows is how turnovers can propel an otherwise mediocre-to-good team into a great season. Turner Gill got the Kansas job because of his MAC championship in 2008, and there's the Bulls with the third best turnover margin that year. Speaking of Kansas, they led the nation in turnover margin in 2007 and made the Orange Bowl that year. Of course, there are also some teams where this doesn't hold true. Memphis, Rice and North Texas all made the top 25 this season but combined for 11 wins. In other words, there's a good chance an overachieving team has a high turnover margin, but a high margin doesn't necessarily mean a team is good,

Like I said earlier, I came into this believing turnovers tend to be a random occurrence. If that was true then there shouldn't be much correlation from year-to-year in the top 25. Outside of some exceptions (I'll get to that towards the end), there doesn't seem to be much carry-over.

But let's dive a little deeper into the numbers. I decided to take the teams in the 2011 top 25 (for a total of 29 teams because of the teams tied at the end) and compute their average turnover margin from 2007 to 2011 and the standard deviation.

(Note that I do consider myself a bit of a stats geek, but I didn't go too far into this. You won't find any p values or the like here. I didn't want this post to turn into work.) 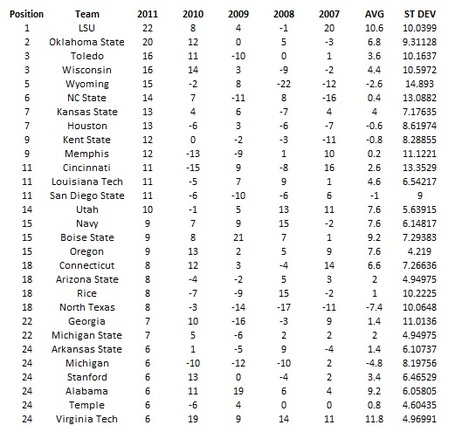 So now let's take a look at the Irish. I did the same analysis as before but compared the Irish to some of their common opponents. I threw in Cincinnati for fun as well.

Turnovers really haven't been a problem the last few years for Notre Dame. Even in 2007, the Worst Year Ever, the Irish broke even in turnover margin. Obviously, 2011 was just, well, horrible. It is interesting to see Cincinnati with a -8 margin in 2008, their first season BCS season.

But let's break things down even further and split the Irish's turnover margin into the fumbles and interceptions lost and gained.

The Irish had 24 turnovers last season and 26 this season. Those aren't great numbers by any means, but it's not like 2011 was significantly worse than 2010. The difference between 2011 and 2010 is that the Irish has 25 takeaways last year to scrape out a +1 turnover margin. This season, the defense only had 13 takeaways. Interceptions especially were a problem. After pulling in 18 last year and breaking double digits the previous four years, the defense only managed five this year.

Let's go even deeper and compare the Irish's numbers to the national average.

14 interceptions and 12 fumbles are bad, but only five interceptions on defense is less than half the national average. The Irish recovered a below-average number of fumbles as well. If the the Irish were just average in those categories - say, 11 interceptions and 10 fumble recoveries - that -13 turnover margin shrinks to -5, which would put the Irish at tied for 90th nationally instead of 116th. I want to emphasize that this is still bad, but the defense didn't do the Irish any favors.

Look at 2008. Clausen threw 17 interceptions that year and the Irish fumbled the ball only one fewer time than they did in 2011. But the defense made up for it with 25 takeaways of their own. I remember Clausen throwing those interceptions, but I don't remember 2008 as being a worse year for turnovers as this past year has been, even though the 2008 team actually turned it over more than this year's team. That's because the Irish caught some breaks of their own and it didn't seem as bad in comparison.

So what conclusions can we draw from this? Well, you can look at the numbers anyway you want. The turnover from year-to-year in the top 25 teams in terms of turnover margin and the high standard deviation in the five years I looked at suggests that turnovers aren't something that can be controlled.

But there is certainly evidence that contradicts my claim. Michigan is a prime example. Michigan's turnover margin in 2007, their last season with Lloyd Carr, was +2. In 2011, their first season with Brady Hoke, it was +6. In the three seasons in between with RichRod, it was -10, -12, -10. That's either terrible luck or a symptom of something else (coaching, poor talent, etc.). Another example is Virginia Tech. They made the top 25 in each of the past five years (they were one of the teams tied at the bottom of 2011). They're a team that is known for producing turnovers and seem to be immune to the peaks and valleys of every other team.

Another factor that my analysis didn't take into account is personnel. It's pretty much accepted that younger players turn the ball over more often than older, more experienced players, especially at the quarterback position. Jimmy Clausen threw 17 interceptions his sophomore year and then only had five his junior year. If a team's turnover margin took a hit from one year to the next, it may be due to youth and inexperience and not to luck.

From a Notre Dame standpoint, I think the problems weren't so much the quantity of turnovers, it was the timing of them - countless turnovers in the red zone and two fumbles recovered 90+ yards for touchdowns. Compound that with a defense that couldn't get any turnovers of their own and things seemed much worse than they were. In Notre Dame's losses, the opponents only turned the ball over five times, three from Michigan and two from Stanford. The South Florida game could have turned out differently if the defense had come up with a timely interception or fumble, and the Irish really could have used a momentum-killing turnover against USC.

The problem is, I'm not sure what the coaches can do to get more turnovers out of the defense. Fumbles and interceptions are more of a product of being in the right place at the right time. I think maybe Notre Dame just drew the short straw this season.

So in the end, I still think turnovers are fairly random. You can teach a quarterback not to throw interceptions and you can teach ball security, but turnovers still happen. And when it comes to defense, unless you're Virginia Tech, I'm not sure how the defense can force more turnovers. Sometimes the bounces go your way and sometimes you can't catch a break.