The Stanford game wasn't much fun to watch, but at least we got see Andrew Hendrix in his second stretch of extended action this season.

When we last left the Voodoo Child, we saw him running all over the out-matched Air Force defense to the tune of 4/4 through the air for 33 yards and only six carries for 111 yards (including his infamous 78-yard non-TD run). We didn't see a whole lot from him, though - a few speed options, some designed QB runs, one zone read, and only two different passing plays. After that game, Kelly decided to cover him in bubble wrap and stick him in a corner, giving him only three snaps since then. But with Rees injured and not moving the offense at all against the Cardinal, Kelly thought it necessary to give the sophomore a shot.

I won't cover every one of Hendrix's snaps (sorry, but that's about 50 plays), but I will point out a couple plays that caught my eye.

Let's start with the passing game. Kelly obviously didn't expect to have Hendrix play half of the game, so the playbook was severely limited. By my count, with Hendrix at QB, the Irish ran the shallow cross 12 times (counting one play where pass interference was called and one play where Hendrix was sacked).

Notre Dame ran this play two different ways (technically, it was three different ways because they ran "mesh" once, but that was on 3rd and 19, so I'm not really counting it). We'll start with a bad throw and end on a good one.

The Irish ran this play several times against the Cardinal. 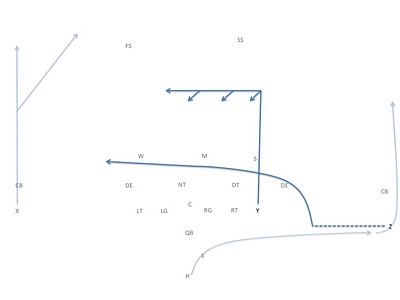 This version of the shallow cross is a staple in the West Coast Offense. Hendrix will try and hit Tyler Eifert on the in route. 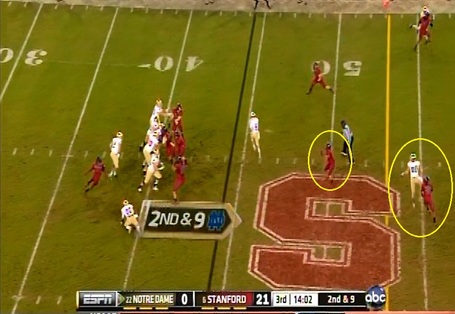 Eifert is open, but Hendrix throws the ball right at the linebacker playing underneath. Luckily, the ball isn't picked off.

The throw was bad, but the read was actually good. Eifert had a step on his man. Hendrix just needed to wait until Eifert cleared the linebacker before throwing that ball. There was no reason to rush the pass.

Now, the second variation on the shallow cross. 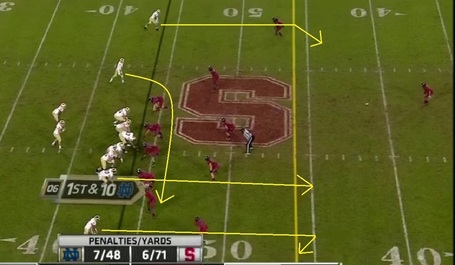 This time, the receiver running the cross (Robby Toma) is on the other side of the formation from the tight end (Eifert). Instead of running an in, Eifert will run a seam route. 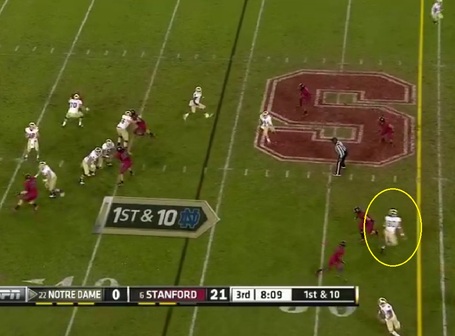 The linebacker seems to ignore Eifert and the corner can't keep up. Eifert slips behind the defense. 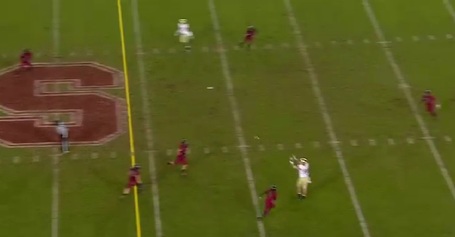 Hendrix makes the easy throw for a big gain.

Outside of the shallow cross, Kelly called some rollouts and few plays where it looked like Hendrix's only instructions were "throw to Floyd." Hendrix made some bad throws and some bad reads, but he also had a few great ones. Hendrix made a throw to Floyd on a go route I don't think Rees ever would have made.

The potential is there, but for now Hendrix has to be thought of as a liability in the passing game. He has a cannon for an arm, but I'm not sure he knows where the ball is going. On his interception in the fourth quarter, he had Eifert open but threw too high and the ball was tipped into the arms of a Stanford defender.

Remember, Hendrix played in a very run-heavy offense in high school. Coach D on Power Hour likes to point out that Everett Golson threw for more yards his freshman year than Hendrix did in his junior and senior years combined. If he wants to be Notre Dame's quarterback in 2012, he'll need to get those kinks worked out. I can't say whether that will happen or not, but he won't be an effective quarterback in this offense if he isn't accurate. 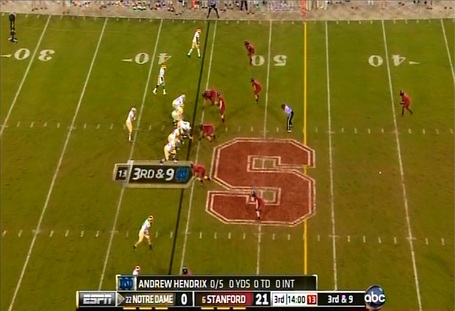 Hendrix has an empty backfield with five receivers. 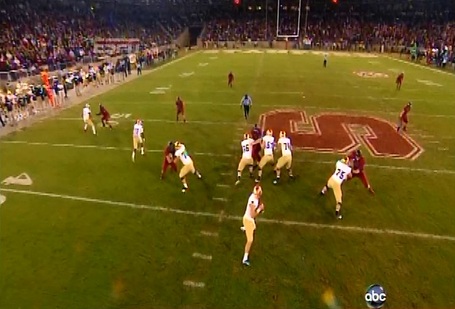 He drops back to pass... 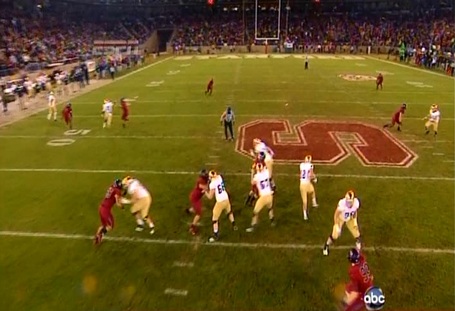 ...and then takes off running. Stanford had dropped back into coverage and the middle of the field is wide open. Hendrix picks up the first down easily.

This is the element Rees does not bring to the quarterback position. On a 3rd and 9 against Rees, Stanford can drop seven or eight into coverage and dare Rees to try and find an open receiver. If they do that against Hendrix, he can take off running. That forces the defense to keep more defenders on the line and opens things up for the receivers. 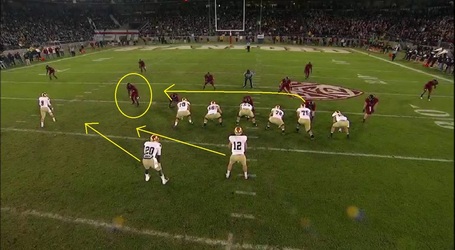 In this first play, Hendrix runs the option to the field side. The circled outside linebacker is read. The backside defensive end will read the play perfectly and come across the line. 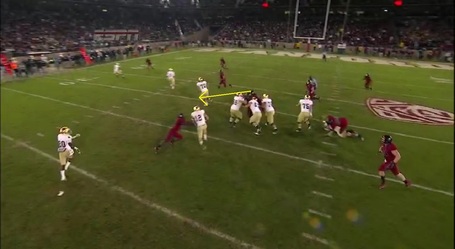 Kirk Herbstreit claimed during the broadcast that Hendrix should have pitched here, but he's wrong. The linebacker never committed to Hendrix, who just cut up inside of him and left him grasping at air. Trevor Robinson and Mike Golic don't get a block on the backside end because he loops behind the other linemen and they can't get to him. 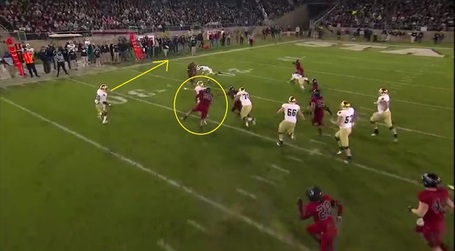 Hendrix probably runs a long way if the end doesn't make this play. He wraps his arms around Hendrix but manages to leave his pitch arm free. Hendrix still gets the ball out to Cierre Wood. 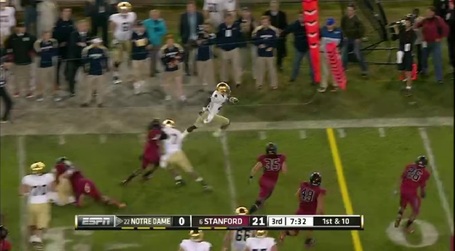 TJ Jones throws a block and Wood runs down the sideline before stepping out at the 20-yard line. 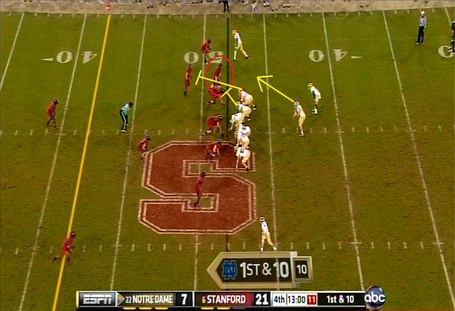 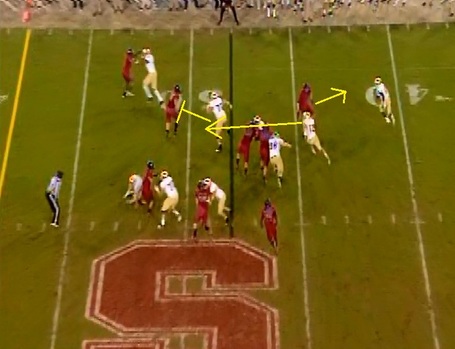 Outside of Robinson and Dever, the blocking is pretty subpar. Watt can't reach the nose tackle, but he runs into Robinson, so he can't make a play. Golic falls down and Zach Martin can only give the linebacker a token shove.

But it doesn't matter. The outside linebacker follows Wood and Hendrix cuts upfield into the alley Robinson and Dever make for him. 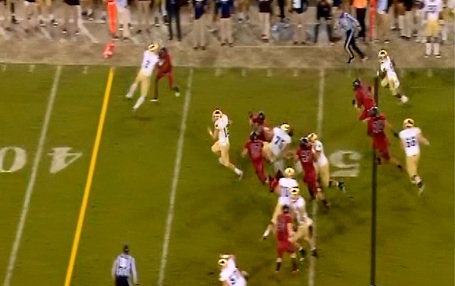 The Voodoo Child gets past the first wave of defenders and picks up 15 yards.

The option game is the best part of Hendrix's game right now. He looked very natural running those speed options. There was no hesitation in his reads and I thought he showed a lot of toughness after getting popped on a few of his runs. Kelly called the speed option only three times and the Irish gained 37 yards on those plays. In one play, a lineman made a fantastic play to get to Hendrix before he got upfield and he still pitched the ball and gained 12 yards. On another, the defense had it sniffed out before the play even began and Hendrix ran for 15. That's some good production.

So overall, I was happy with Hendrix's play. He wasn't great, obviously, but I knew there would be some frustrating moments when Kelly decided to bench Rees. Hendrix played well against Air Force because he had a package he had practiced and was prepared to run. I doubt Hendrix expected to play more than 10 meaningful snaps against Stanford, if at all. He got thrown into the fire against the team ranked sixth in the country and had to play with a very limited playbook. He wasn't very accurate with his throws, he held onto the ball for too long on his sacks, there was no room on the QB counter which worked so well against the Falcons, and there was no supporting run game. But he led the Irish to around 200 yards of offense in the second half, led one touchdown drive, and almost led another before an ugly interception ended it.

I said this at the end my Air Force review:

So what will Kelly do next year? I think if ND stumbles to a 7-5 or 8-4 final record, all bets are off and Hendrix and Golson will be given every opportunity to win the starting job. But if Notre Dame ends up 10-2 or even 9-3, I think it's going to be very hard to bench Rees and go with an unproven player in his place.

Well, here we are at 8-4 and I stand by what I said. I don't think Kelly can justify going into next spring with Rees as the anointed starter. I'm not saying Rees shouldn't be given a chance, though; if Kelly believes he gives us the best shot at winning, then I'll stand by him. But Rees's struggles this year are well-documented and I think Hendrix and Golson need to at least get a look in the spring.

I think Hendrix is still very, very raw (and I think it should be obvious why Kelly didn't want to hitch his wagon to him earlier in the year - he needs work) but there's also a lot of potential. The question is if the light will ever go on and he can become a complete quarterback. We can't possibly know that now.