Against Pitt, Notre Dame faced a defense intent on taking away Michael Floyd and forcing Rees to spread the ball.  Rees had maybe his worst game of the season and the offense couldn't move the ball.  The Irish only stayed in the game thanks to a stellar job by the defense and a long Jonas Gray TD run.  It took some schematic adjustments by Brian Kelly to get Rees in rhythm and finish off the Panthers.

Notre Dame came into the game against Wake Forest missing a pair of three years starters at defensive end.  In their place, two highly-touted freshmen saw significant minutes.  No matter how many stars Rivals gave them out of high school, there's always going to be a drop-off when going from seniors to freshmen.

Maybe not surprisingly, Notre Dame struggled defensively early in the game.  The Demon Deacons put up 17 points and over 200 yards of offense in the first half.  But in the second half, the defense tightened up and pitched a shutout, allowing only 90 yards.

Bob Diaco made only two adjustments after the first few drives by Wake.  First, he pulled Prince Shembo in favor of Jamoris Slaughter to help against the slot receiver.  Second, he went almost exclusively to a four down linemen front.

Neither of these were big schematic changes; instead, they simply put the players in a position to be successful.  Shembo simply wasn't getting it done, and going to the nickel helped out a lot in coverage.  Going to four linemen took some of the pressure off of the Stephon Tuitt and Aaron Lynch.  They weren't playing well against the run and an extra defensive lineman meant they didn't have to worry about two-gapping and had an extra man to help against the run and rush the passer.

The Irish used four linemen a lot in the first half, but also mixed in some three linemen fronts, too.  Those three linemen fronts just didn't get anything done and Diaco basically abandoned that look in the second half.  Diaco didn't even change the defense very much with four linemen.  He always kept Lynch on the defense's left side and Tuitt on the right with either Louis Nix or Sean Cwynar in between them.  Darius Fleming then slid down as a defensive end from his Cat linebacker spot on the boundary side, meaning both Lynch and Tuitt spent time on the interior of the line.  Prince Shembo and Steve Filer also saw time at end.

These are all good adjustments, but I think that the reason the defense shut down Wake Forest in the second half wasn't because of any schematic adjustments.  Instead, it was because the defensive line simply played better.  They got pressure on the quarterback and stopped the run consistently.

Here's the very first play of the game. 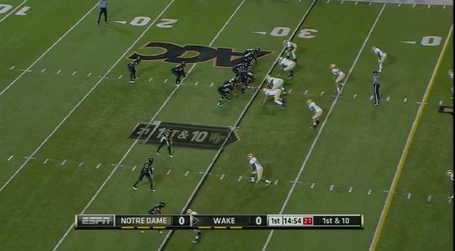 The Demon Deacons line up in the pistol with a TE to the left and trips to the right.  They are going to run an outside zone to the field side. 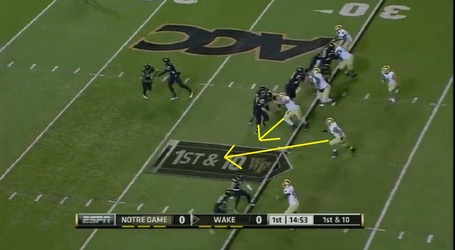 The Irish defense flows in the direction of the play.  Manti Te'o comes down in support. 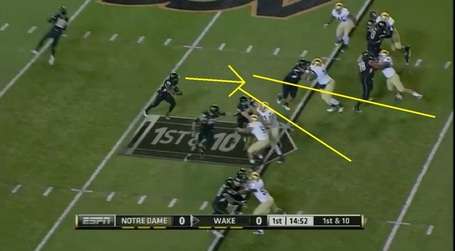 Lynch rides the right tackle outside, right into Te'o.  One of two things went wrong here.  Either Lynch got out of his lane and went too far out or Te'o should have gone inside of Lynch, not outside. 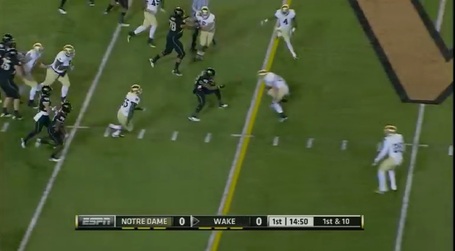 Brandon Pendergrass has a lane and picks up 14 easy yards to start the game.

I don't know how Diaco has his players attack zone plays like this, so I don't know what went wrong.  There was a big lane that Te'o tried to fill, but Lynch kept going out and almost ran into him, opening up another lane.  One of those players was out of position.  Either Te'o read the play wrong or Lynch let himself get too far outside.  I don't know what the answer is, but it resulted in a big hole.

Here's another outside zone, this time in the second half. 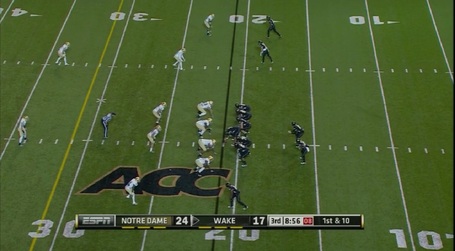 Wake lines up in the shotgun.  Again, the play goes to the field side. 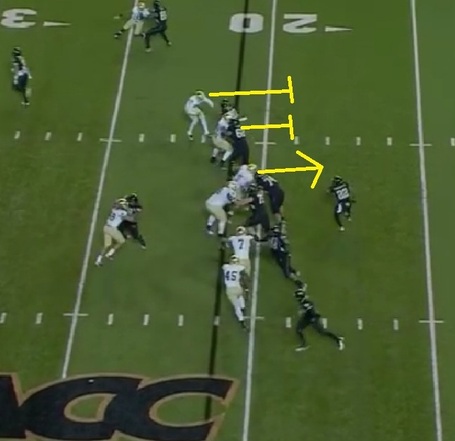 Lynch gets outside faster and Te'o goes inside of Lynch instead of outside. 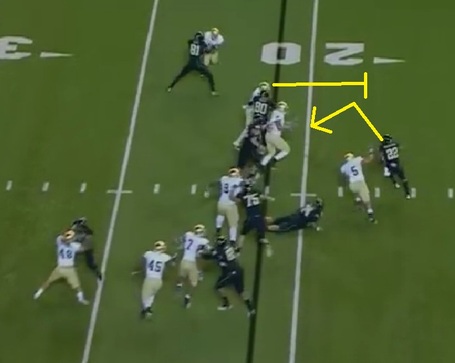 Te'o sheds a block and forces Pendergrass further outside.  Lynch beats his blocker and Pendergrass keeps trying to get outside. 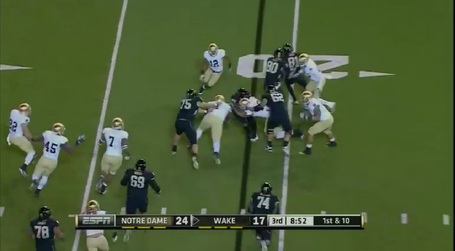 Slaughter comes down and cuts him off, forcing his into Lynch's arms.

The execution was much better in this play.  Everyone filled their lanes and held Pendergrass to only two yards.  Compare what Pendergrass saw in the first play with what he saw here.  There was nowhere for him to go.

Another big reason the defense played so well was because the line got pressure on Wake's quarterback, Tanner Price, without having to bring extra rushers.  Price had all day to throw in the first half and he picked apart the Irish secondary.  In the second half, Lynch, Tuitt, and Fleming managed to finally get into the backfield. 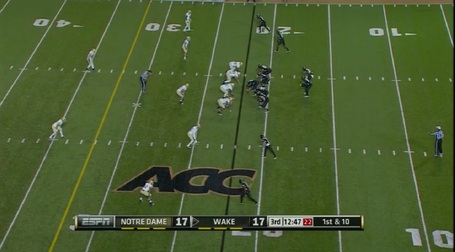 Here, Wake is lined up in a spread set with the Irish in the nickel. 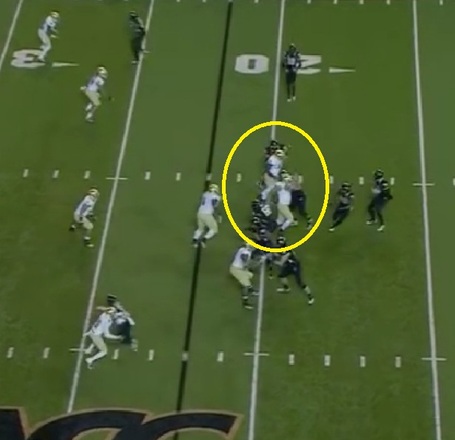 Lynch and Fleming both blow up their blockers at the line and get into the backfield. 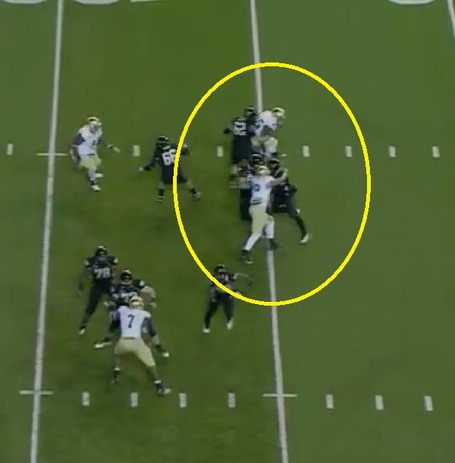 Price has to step up to avoid Fleming, but runs right into Lynch for the sack. 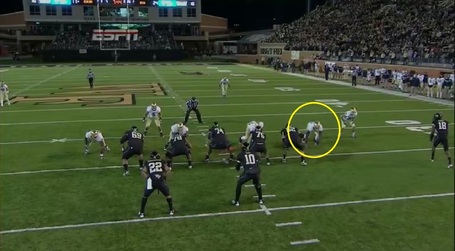 Once again, the Irish have four men on the line.  Fleming is lined up to the right (the defense's left). 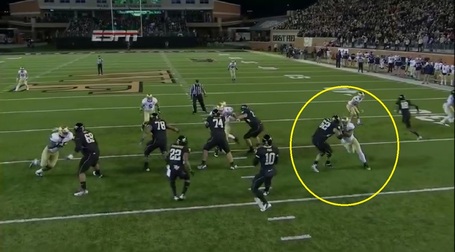 Fleming gets upfield and the right tackle tries to force him outside. 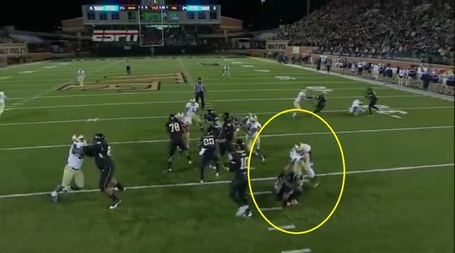 Fleming just barrels over him, disrupting Price, and forcing a bad throw.  Price had an open man but had to rush his throw.

These two plays simply didn't happen in the first half.  Price had plenty of time and found open receivers.  The line got pressure on Price in the second half and slowed down the Wake offense.  This wasn't really due to anything Diaco did, the players just finally got into the backfield.

So what does this all mean?

First, Lynch and Tuitt aren't as good as Ethan Johnson and Kapron Lewis-Moore yet.  This should be obvious to everyone.  Both players are very good and could end up being better than those two in a year or two, but they don't have the size or experience yet.  It's not that I think they didn't play well - in fact, both players made very big plays at crucial times - but this defense was borderline dominant earlier in the season.  I think losing Ethan Johnson hurt a lot against USC, and having Johnson and Lewis-Moore out against Wake contributed to the shaky first half.  Both Lynch and Tuitt have played a lot this year, but this was the first time the bulk of the defense was placed on both of their shoulders.  This defense is still good, but not as good as what we saw earlier in the year against Michigan State and Pitt.

Second, it's not always schematic adjustments that lead to better performances.  Of course, I give a lot of credit to Diaco for switching to the nickel and going with four linemen, but I think the defense just played better in the second half.  Diaco put them in better positions and they responded with a great half of football.  Lynch, Tuitt, and Fleming all made plays in the backfield and knocked Tanner Price out of rhythm.  That just didn't happen in the first half, and it was very frustrating to watch.  In the second half, they got in his face and stopped the run.

Ethan Johnson should hopefully be back soon, but the Irish have two relatively easy games left to smooth out some of the wrinkles in preparation for Stanford, which will be a much stiffer test for these young players.