The Change-of-Pace Quarterback and the Boston College Eagles

Share All sharing options for: The Change-of-Pace Quarterback and the Boston College Eagles

The wildcat has been around for a while now.  Everyone knows what the wildcat is: you stick a running back behind the center and snap it directly to him and run some kind of read-option play or maybe just a straight ahead run.  Irish fans should be familiar with the wildcat; Weis used it in 2009 and Brian Kelly played around with it a little bit last season.  Everyone is probably also familiar with the advantage the wildcat offers: with your "quarterback" as the ball-carrier, you gain an extra blocker.

But the wildcat has evolved over the years.  In the beginning, the offense lined up with the QB split out wide so the other team wouldn't see the quarterback sub out of the game.  Usually they would line up in an unbalanced line with an H-back in the backfield.  They would then bring a receiver across the field on a jet sweep and either hand it off to him or run with the wildcat back.  This was not a read; the handoff was predetermined.

Here's a video of former Arkansas and Miami Dolphin offensive coordinator David Lee talking about the wildcat and Darren McFadden:

How Does Darren McFadden Do It? (via CBS)

And here are some cut-ups of the Dolphins running the wildcat:

As defenses adjusted, so did the offenses.  The jet sweep eventually went away and teams started just running their base run plays out of the wildcat.  Then the QB started coming out of the game because teams were no longer fooled when a running back lined up in the shotgun.  Finally, teams (especially in college) decided it was just easier to put in a mobile quarterback who was a threat to run and pass.  Some coaches run entire offenses based off of that idea and some just use it as a change of pace.

Which brings us to Notre Dame and Boston College.  I think it's safe to say that most Irish fans were excited when we got our first look at Andrew Hendrix as the "change-of-pace" quarterback against Air Force.  He didn't disappoint either, with over 100 yards rushing - including a 80-yard TD 78-yard run - on the day.  But since then, the Voodoo Child has only seen the field a handful of times, leading to a fair amount of angst and frustration within the fan base.

BC, meanwhile, has their own change-of-pace quarterback in Josh Bordner.  Border burst on the scene about two weeks ago against Florida State when he took his first snap 25 yards on a zone read.  He ended up leading the Eagles on a 74-yard drive that ended with a fumble at the goal line.

So how does Boston College use Bordner?  Well, he's only seen extended action against Florida State and North Carolina State, so there's not much film to go off of.  He's only thrown two passes all season, so he's a runner first and foremost.  Also, his playbook is rather limited.  Against FSU, he ran a few zone reads and a few designed runs.  Against NC State, he ran only four different plays - the zone read and the three plays I'll highlight here.

In the game against the Wolf Pack, the Eagles brought out the "traditional" wildcat look. 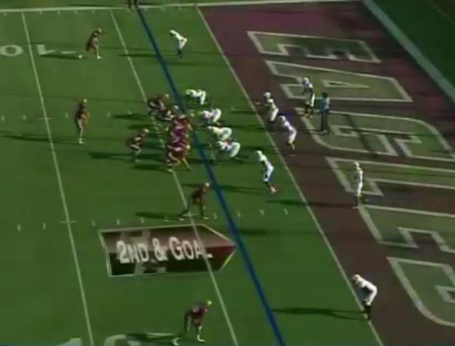 Bordner is lined up in the shotgun with an H-back also in the backfield.  The receiver to the left comes over on the jet sweep motion.  This is all exactly like Lee drew up in the Arkansas video. 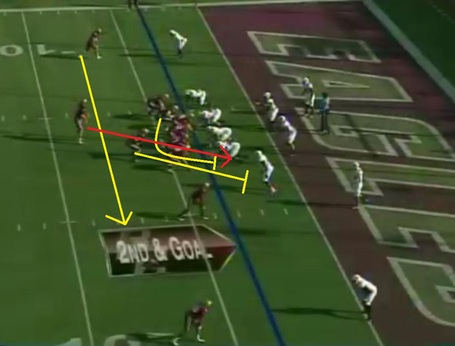 BC is just going to run a basic Power O play.  The H-back will kick out the outside linebacker and the backside guard will pull through the hole. 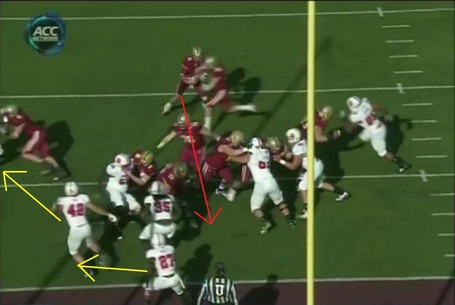 You can see the problems the jet sweep action causes.  The safety and the linebacker both bite on the fake handoff and take themselves out of the play. 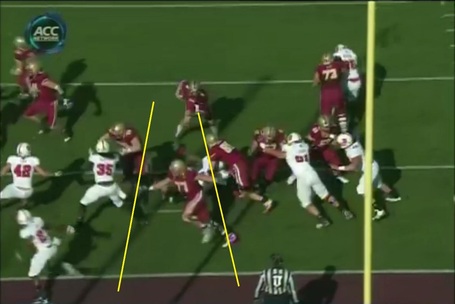 A hole opens up in the middle of the line and Bordner cruises into the end zone.

BC then changed things up by running the same power play to the weak side. 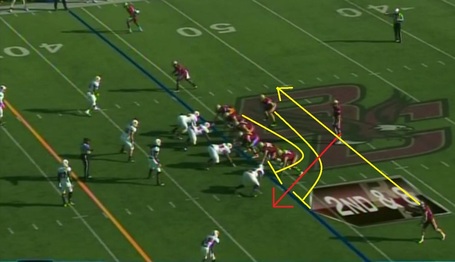 This time, the pulling guard kicks out the linebacker and the H-back comes across the formation to act as the lead blocker.  Their roles are reversed because the H-back has to come from farther away than the guard and can't make the kick-out block. 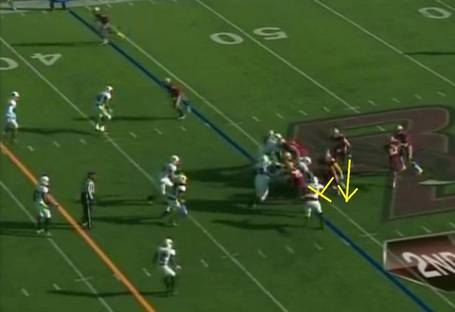 The defensive end, possibly thinking the play is a zone read, freezes and is blocked easily by the guard. 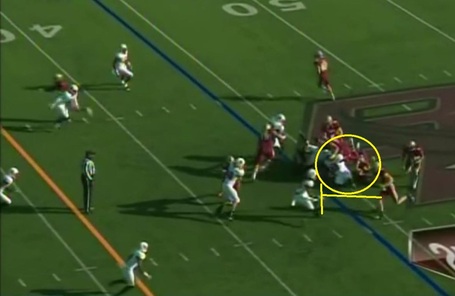 The guard seals off the edge and the linebackers are accounted for. 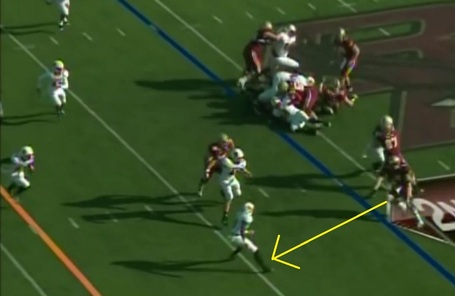 That leaves only the safety four yards downfield to make the tackle.  Bordner is 6-4 and 224 pounds, so that's a matchup BC likes.

Finally, with the defense thinking QB runs, BC hit them with a sweep. 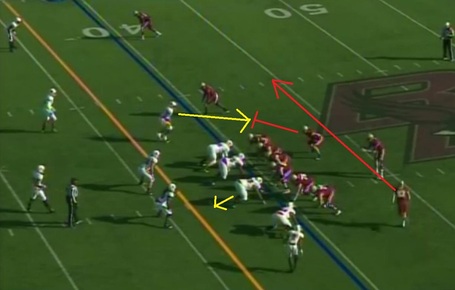 Like Lee said in the video, this play is run with zone blocking.  This is why there's no read on the sweep; the blocking is different on every play.

NC State brings a zone blitz.  One of the defensive tackles drops into zone coverage while the corner comes on the blitz. 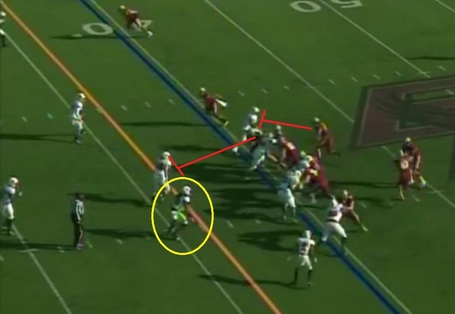 The H-back is right there to take out the blitzing corner.  The tackle moves up to block one linebacker while the circled one has no idea what to do and freezes. 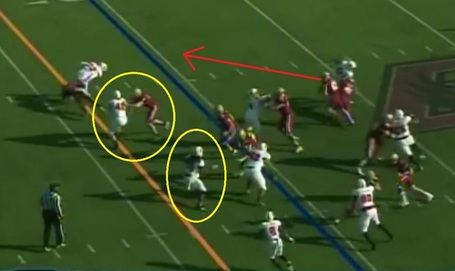 The blitz is picked up and the blocking is solid. 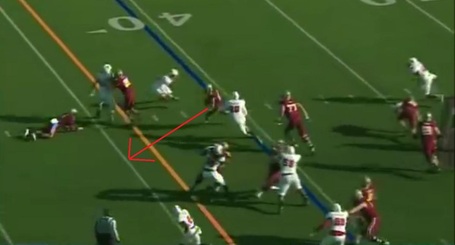 The receiver finds a crease and cuts upfield for an easy first down.

So what should Irish fans expect?  Spaziani gave Bordner an entire offensive series to himself against FSU and NC State with a couple carries mixed in here and there throughout those games and I don't see any reason to think that won't happen again on Saturday.  The young Irish defensive line has had some issues containing mobile quarterbacks, so I expect to see him pick up some yards and frustrate Irish fans.  CJ Brown was able to drive the Maryland offense down the field, even against the first-team D.  Yes, the game was already out of reach at that point so that may have had something to do with it, but I thought the defense looked sloppy and missed on a few tackles.  But with no threat to pass from Bordner, the defense can hopefully just focus on getting to the ball, no matter who has it.

Aaron Lynch and Stephon Tuitt have all the talent in the world, but they're just not as disciplined as Ethan Johnson and Kapron Lewis-Moore.  I worry about them getting beat on zone reads and other misdirection plays.  I have a feeling that if that happens, they'll get an earful on the sidelines and it won't happen again.  The key to stopping Bordner will be those two playing sound defense and not getting out of position.

With the surprise factor gone for Bordner, I would expect the defense to be ready to stop him.  Boston College probably won't use him a whole lot because it looks like they simply do not trust him to put the ball in the air.  Even if he's successful early on - which I kind of think he will be - he won't be able to sustain it and Notre Dame will slow him down.  Or maybe Spaz will take the Brian Kelly approach and just not play him.  I guess we'll see.