A game against a less talented opponent is a good time for a coach to install a new concept into the offense or defense.  The team doesn't need to devote as much time to gameplanning for the opponent and can try something new, knowing that their superior talent should make up for any time lost teaching a new scheme or formation.

The Irish did just that against the 2-7 Terrapins.  After breaking out the "diamond" formation against Wake Forest, Notre Dame brought out the pistol formation and a two-back set on Saturday.

We'll start with the pistol. 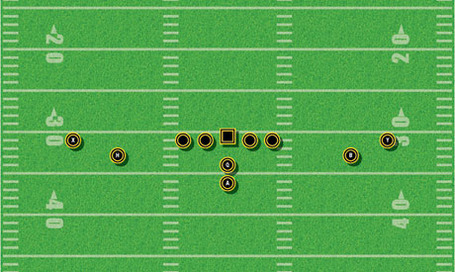 Most people probably think of Nevada and the high-powered offense they run out of the pistol.  The Wolf Pack ran for 4484 yards at 7.39 yards a carry in 2009 and featured three 1,000 yard rushers in 2009 (and got shutout by a TAH-NOO-TAH defense).  But it's important to remember that the pistol is a formation, not an offense.  Alabama occasionally uses the pistol and it's starting to pop up in the NFL, so it's not just for the spread.

So why use the pistol?  Its main advantage is putting the running back behind the QB.  This allows the back to run downhill without tipping the direction of the play to the defense.  The running back cannot easily run to the outside away from the quarterback.  He typically has to go across the QB to receive the handoff.  Yes, there are ways around this, but the options are rather limited.  The pistol does lend itself well to misdirection runs and option plays - such as the veer - but not exclusively.  Basically, it combines the downhill running you get from under center while still keeping a shotgun look, making it useful in almost any type of offense.

Obviously, the Irish weren't running any option plays out of the pistol.  In fact, they didn't do anything new at all.  They just ran their usual inside zone, power, and counter plays.  But the play I'll highlight is one Coach D mentioned during Monday's Power Hour and I think is worth looking at. 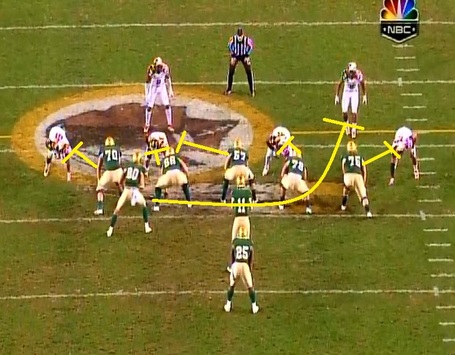 Jonas Gray is lined up behind Tommy Rees and Tyler Eifert acts as an H-back on this play.  The Irish will run their usual counter play with Eifert acting as the lead blocker.  Chris Watt and Mike Golic will double Joe Vellano and Eifert will lead through the hole and block the linebacker. 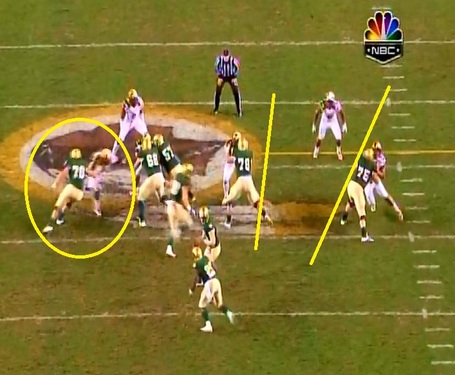 Trevor Robinson and Taylor Dever open a giant hole on the right side.  The middle linebacker sits back, an easy target for Eifert.  Meanwhile, on the left side, something unusual happens:  Zach Martin gets beaten badly by the defensive end.  Martin expected him to go wide and he slanted inside.  Martin does the best he can to get a body on him. 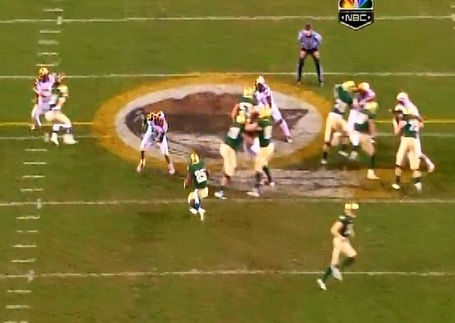 So the blocks are good and everything goes more or less according to plan... except Jonas runs the wrong way.  He's supposed to follow Eifert through the hole, but he continues to the left side.

Martin drives the end into Vellano, who breaks free from his block.  With no one to block, Golic goes after the first defender he sees, the linebacker.  Martin and Watt end up unintentionally double teaming the end.  Vellano, meanwhile, loops around the logjam and is right in Gray's path. 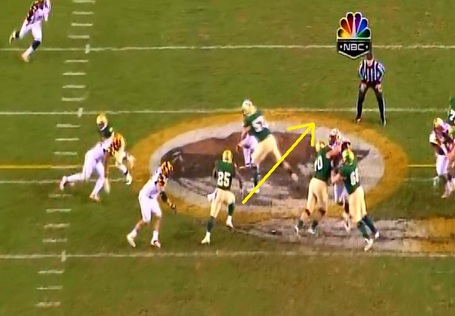 But we all know how this ends.  Jonas Gray will win a battle in the open field against a defensive tackle every time, even against one as good as Joe Vellano.  Gray cuts back to the middle of the field and runs through the lane Golic, Martin, and Watt somehow ended up making out of nothing and picks up eight yards.

So the Irish didn't do anything new and exciting with the pistol, but, as Coach D mentioned in Power Hour, this play illustrates a larger trend in this Notre Dame team: the margin of error for this team is getting bigger.  Is there any doubt that if something like this had happened in the Charlie Weis years that this play would have been stuffed for a loss of three instead of a gain of eight?  This team is just getting better.  They may not be perfect on every play - in this case, Martin missed a block and Gray went entirely the wrong way - but they play hard enough and at a high enough level that they can make up for that.  Golic can go up and block a linebacker.  Martin can do enough to get the defensive end into a position where Watt can help out.  And Gray can make a move on a guy to gain positive yards.  As disappointing as this season has been with the high expectations and crushing losses, it's hard to say this team isn't better than it was just two years ago.  It may be a result of better or coaching or just an upgrade in talent, but either way, this team doesn't need to be perfect to succeed.  They have the ability to make up for their mistakes, which wasn't something you could say about the Irish team from 2007-2009.

Now on to the two back set. 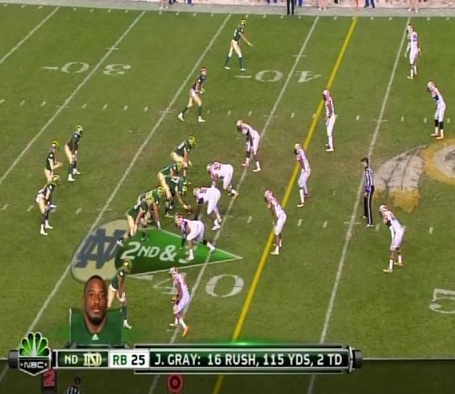 I've wanted to see this formation for a few weeks now.  Notre Dame has two very good running backs so why not get them both on the field at the same time?  Again, the Irish didn't do anything out of the ordinary here; they ran some outside zone and some power, both times with the other back acting as a lead blocker (HARUMPH). 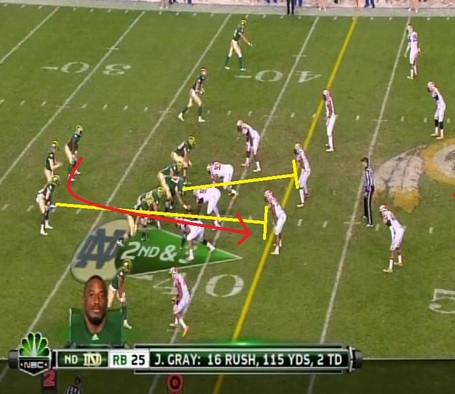 The Irish will run a power play with Cierre Wood acting as the blocker for Jonas Gray.  Wood will pick off one linebacker, while Golic will take care of the other one. 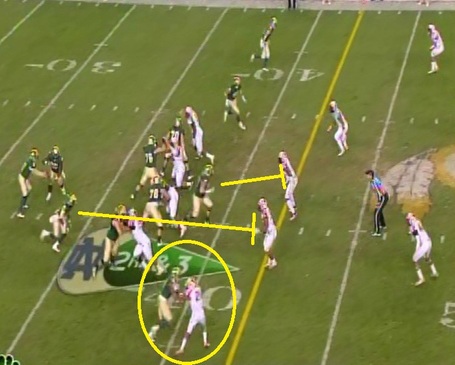 Robinson blocks down on the tackle, opening up a nice lane with Dever.  Keep an eye on Floyd at the bottom of the picture.  Notice that he's on the 40 yard line. 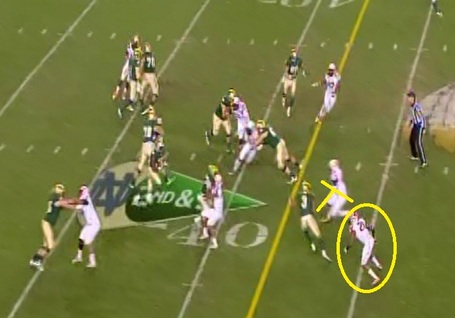 Wood gets a pretty nice block on the linebacker and Golic is holding his own.  Rees isn't fooling anyone on his run fake.  But look at Floyd.  He drove his man back five yards, decided he was tired of blocking him, and went after the safety. 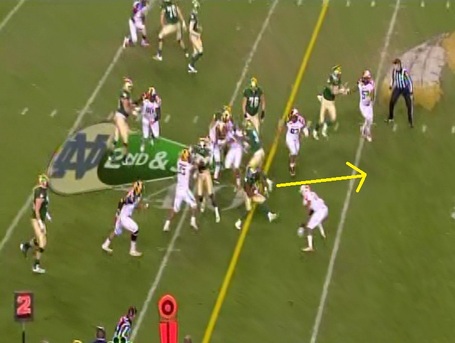 Floyd seals off his man and the corner can't get to Gray before he's crossed the first down line.  Gray makes him miss for good measure and picks up five more yards, eight in all.

So what does this play tell us?  First, Michael Floyd is a monster, but everyone knew that already.  Second, Wood is pretty decent as a lead blocker.  He made a good block on this play and threw a nice cut block on an outside zone on another play.  I was a little surprised to see Wood being used as the lead blocker and not the bigger Gray, but he did well.  Notre Dame used this formation briefly last season, but Kelly had Kyle Rudolph line up in the backfield and used him as a lead blocker.  The Irish didn't have two backs last season playing as well as Wood and Gray, so Kelly's options were a little more limited.

So that's a look at the new formations the Irish debuted against the Terps.  It will be interesting to see if the pistol and two-back set show up against Boston College and Stanford.  Both formations were used last season, but neither became a big part of the offense.  With the possibility of Goldrix becoming the starter next year, I think both formations could be very useful.  It's possible Kelly is starting to look ahead to next season.