Share All sharing options for: The Shamrock Series Experience: Live From FedEx Field

As a current New Jersey resident and a specific Living Social deal (which a friend who's married to an Annapolis grad/Navy Lieutenant was able to point me to), I was able to have my first Notre Dame game experience since graduating (which wasn't that long ago - May 2010 - but it feels longer). Here are my comments on the gameday experience at FedEx Field where Notre Dame played a home game 6 miles away from their opponent's campus.

Here's a picture of the view I had during the game (poor picture quality is because my phone's camera is a mere 3.2 MP - I'M SO SORRY I DON'T HAVE AN iPHONE!) 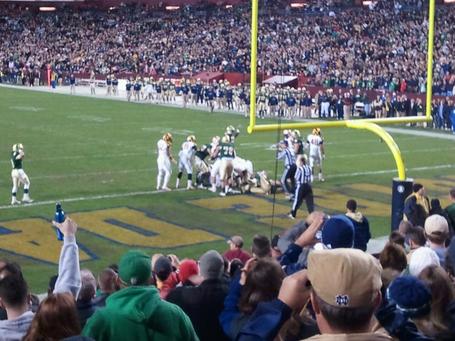 This was the scene after the Tommy Rees goal line sneak attempt before Jonas Gray's 1st TD run in our opening drive. As you can see mostly Notre Dame fans, painted end zone (which I wasn't a huge fan of actually) and a dude holding a Bud Light. Not quite the ND Stadium scene. I sat 20 rows above the field and I got the tickets for just under $60 each (THANK YOU LIVING SOCIAL!)*

*This post is not sponsored by Living Social nor does it express the views of the company. L-O-L

The stadium wasn't full - looked like about 10,000-15,000 (82,000 capacity) empty seats but the crowd that was there was enthusiastic mainly because of the adult beverage they were able to consume before and during the game.*

*This was the first NFL stadium I ever tailgated at, but kudos to FedEx Field's parking and tailgating policy. Free, easy access, and strategically placed trash cans and porta-potties. Another tip of the hat to the majority of the tailgaters who displayed impressive responsibility in the clean up process.

I won't talk extensively about how the uniforms looked, but I did like the look - my only complaint was that we wore green socks and flesh (fine Jack Swarbrick, GOLD!) colored undershirts, I thought we should have worn white socks and shirts since the majority of the guys were wearing white shoes and white goes well with forest green. Also the Maryland jersey's aren't as eye-blood inducing as they have been made out to be- at least that's my personal opinion. I think seeing the Maryland seal and flag over and over again during the trip made me appreciate the thought behind the kits.

Other than the game, the main thing I was keeping my eye on was the jumbotron and the experience made me fully endorse the idea of having a pair of jumbotrons moving into Notre Dame stadium. There was an opening montage accompanied with hard rock guitar riffs that featured highlights from the season (RJ's interception, Aaron's sacks, Floyd's catches, Jonas' big run etc.) and nicely digitized monogram at the end capping it all off. There was another montage that mixed scenes from campus with a similar set of highlights and I thought they were both extremely well done. There was a video montage dedicated to the troops (Veteran's Day) which featured prominent figures from the Athletic Department saying thank you and that was obviously done well as well. The usual Notre Dame partners (Adidas, McDonald's, Coke, Sprint) got their shout outs, but never any full fledged advertisements. Replays and live in game looks were appropriately sprinkled in along with Notre Dame trivia (Which game was the "Win one for the Gipper" game? Answer: 1928 vs. Army @ Yankee Stadium) and one of the always moving "What Would You Fight For?" ads for the University.

Beer in the stadium did allow for the emergence of a few jerks across the stadium, including a pair of ND fans (but hopefully not alumni) in my section who were incessantly mocking the Maryland marching band leader throughout the night, but I didn't see anything ridiculously offensive that can be blamed on alcohol.

Maryland did have a few fans in the stadium (probably about a fifth in the stands were Maryland fans) but considering the game was being played 6.5 miles away from College Park, MD and tickets were easy to come by, it was a pretty shameful outing both by the Maryland team and its fans.

Overall, I think the Shamrock Series is fantastic for subway alums and fans scattered across the country and worth the sacrifice of one home game (I got to see my old freshman year roommate and his parents, a few dormmates, and a bunch of other old friends that I otherwise never would have gotten to). And while this particular game experience didn't have the excitement that a home game against a rival school would have, singing the Alma Mater (with just half the team - because the other half forgot it was a home game) at the end of the game was still pretty damn special.