Navy Review: Listening To The Coach

Share All sharing options for: Navy Review: Listening To The Coach

The flexbone spread option offense is tricky.  The popular wisdom is that no one runs that style of offense because it's "too old-school" and "everyone knows how to stop it," yet every year Air Force and Navy put scares into teams like Ohio State, South Carolina, and Oklahoma while playing with kids who wouldn't even be playing FBS football if they hadn't enlisted in the armed forces.  The spread option has hit that almost perfect balance where everyone seems to think it's been figured out, but no one runs it, making it difficult to stop.

Notre Dame has seen the effects of this as they played Musical Defensive Coordinators over the past five years.  The result: three losses to Navy and one to Air Force.  The best way to stop the option offenses of the academies is to see them up close.  The speed and precision of the cadets cannot be mimicked in practice and cannot be fully appreciated on film.  Bob Diaco learned this the hard way.

Diaco's initial attempt at stopping the Middies was an outright disaster.  His gameplan seemed to rely on the Irish defenders reacting to the plays and using their superior athleticism to stop the ball.  All of that reacting led to our defenders getting easily cut at the line and Alexander Teich rumbling for 210 yards.  The Midshipmen were able to sit back and run their base plays all day because Notre Dame was completely unprepared to stop it.

But give Diaco credit.  From that dumpster fire of a game, he seemed to catch on to the intricacies of the triple option, and the Irish put on a much better show against Army in Yankee Stadium a few weeks later.  The Irish were much more aggressive and managed to hold Army to 135 yards rushing, an amazing number against an option team.

Of course, the excuses came out (even from me): "Army's not as good as Navy," "Army is still learning a new system," "Army doesn't run the flexbone," and so on.  But the defensive scheme was a major upgrade from what we saw against Navy.

Fast forward to this season.  The Irish, coming off of three straight wins to right the ship after that disastrous start, squared off against the Air Force Falcons.  Air Force beat Navy in a thrilling overtime game the week before that for some reason put Irish fans on edge.  The game itself did little to calm their nerves as the Falcons gashed Diaco's defense for over 500 yards.  Luckily, the offense scored 59 points so that didn't matter.  But it was disheartening to see the Irish seemingly take a step back against the triple option.

Finally, we arrive at Saturday's game.  After the Air Force game, no one was quite sure how the Notre Dame defense would play.  Over here at One Foot Down, The Coach gave us a primer on how to stop the triple option.  It seemed so simple, but the question was whether the Irish would actually do it.

The answer: Yes they would.  In fact, I think One Foot Down should take credit for that defensive effort, because Diaco clearly read The Coach's breakdown.

So let's look at the defensive gameplan against the Middies.

The biggest problem with the defense against Navy last year and Air Force this year was the use of the middle linebackers.  Against Navy, the linebackers ran straight into blockers as they tried to fill gaps no one was running through.  Against Air Force, the linebackers played tentative because of the threat of the pass.  This lead to big holes for the fullback and no one covering the pitch.

Against Army, Diaco abandoned the 3-4 defense that performed so horribly against Navy and instead went with a 4-4 look with Harrison Smith playing centerfield.

Diaco altered this plan slightly against the Midshipmen. 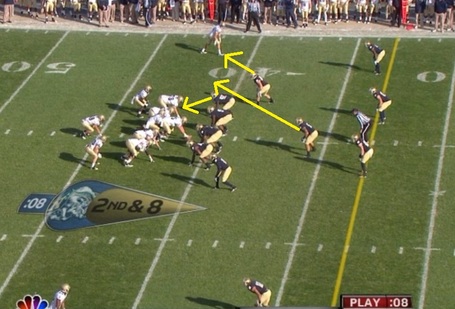 The Irish lined up in a 4-3, allowing them to keep an extra safety back.  Manti Te'o essentially took Harrison Smith's centerfield spot.  Jamoris Slaughter played outside linebacker to the field side with Dan Fox to the boundary side.

When facing the triple option, the defensive ends crashed hard on the fullback to take away the dive.  The outside linebacker, unlike against Army and Navy in 2010, took away the pitch instead of attacking the quarterback.  Te'o then took the QB. 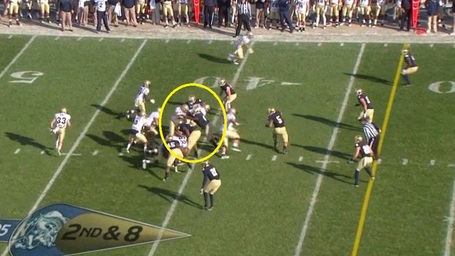 This is where Notre Dame dominated the game. The defensive line did a fantastic job of collapsing on the fullback.  At the mesh point with the fullback, all Trey Miller, Navy's quarterback, sees is Louis Nix, Stephon Tuitt, and Prince Shembo clogging up the middle of the line and has to pull it.

Dan Fox follows the pitch man and Te'o blows past his blocker.

Te'o drapes himself over Miller and drags him down for a gain of only two yards.

The Irish changed up their scheme at times. 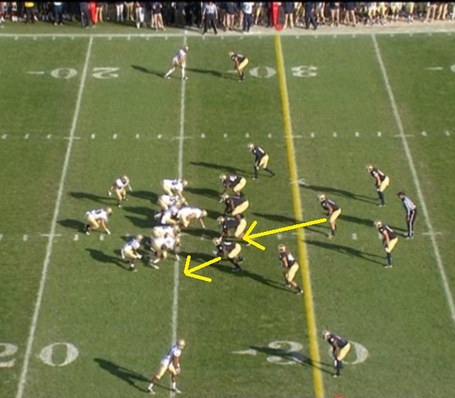 Instead of pinching on the fullback, the ends stayed outside, riding the offensive tackle as he tried to get to the second level.  This gave the quarterback the fullback give read.  Te'o came down into the B gap to make the play. 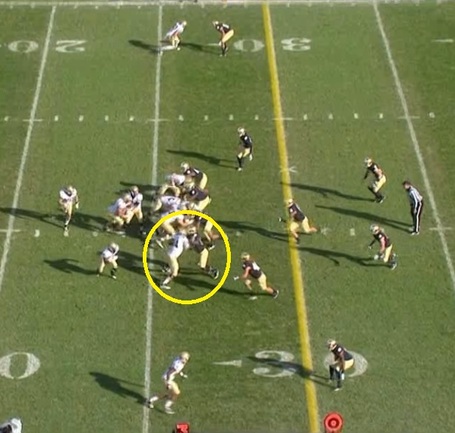 Shembo engages with the tackle but fights to stay inside so he can make a play on the fullback. 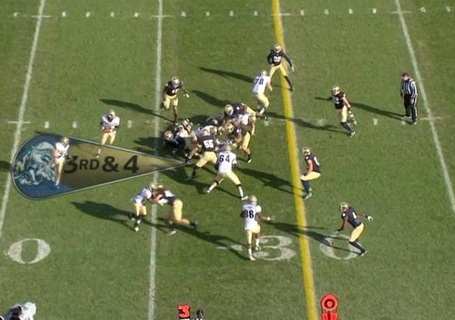 There's no need because Te'o makes the play.

With the triple option covered and a young quarterback struggling with his reads, Navy ran a lot of speed options in this game. 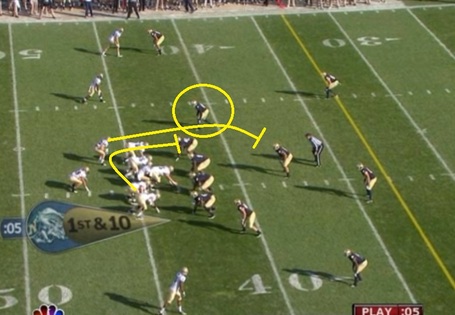 Navy tries to make this play look like the triple option.  The playside defensive end is initially unblocked just like on the triple option, but the backside guard pulls and cuts him.  The A back loops around to block Te'o.  Slaughter is the optioned player. 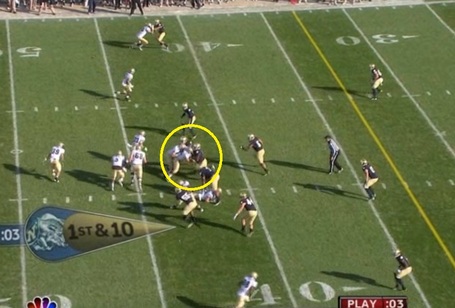 Fleming pinches as if Navy was running the triple option.  He's an easy target for the pulling guard. 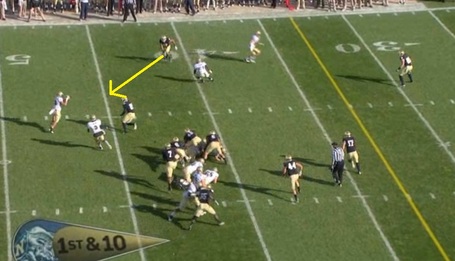 The A back cuts Te'o, Slaughter forces the pitch and Blanton comes down off the wide receiver to make the play.

This is an example of Miller not being precise with his option reads.  That pitch is too early.  Slaughter was slow-playing Miller slightly, but he still gave it while Slaughter was in position to force the B back further outside towards Blanton.

Finally, the midline.  Even though Navy only ran this play once, I want to point it out. 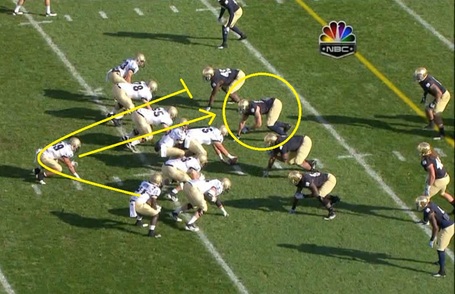 I think Navy wanted to use this play as a counter to Notre Dame's defense.  With Te'o flowing outside, Navy wanted a play up the middle to take advantage of the open space. 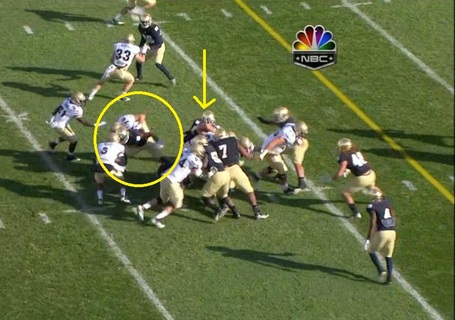 The only problem is, Darius Fleming blows the play up.  Sean Cwynar, the player under the arrow, crashes on the fullback, causing Miller to pull.  But Fleming bulldozes his way into the backfield, right into Miller's way. 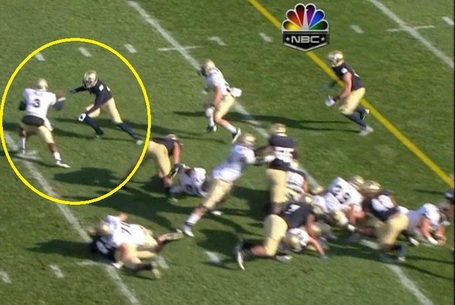 Miller has to go outside, right into the arms of Jamoris Slaughter.

So what were the differences between this year and last year?

First, the defensive ends crashed hard on the fullback to take away the fullback dive.  The Coach wrote about how important that was in his breakdown.  Last season, the ends were too passive, making them easy targets on traps and sweeps, opening up holes for the fullback.  This season, Teich ran for only 62 yards.  That's a huge difference.

Second, the linebackers (in this case, just Te'o) didn't run into blockers.  That seems simple, but it was a huge problem last season.  Instead, Manti was everywhere, making plays all over the field.  There was actually someone to cover the quarterback AND the pitch.  Again, this seems like common sense but that wasn't the case before.

Third, the Irish built an early lead.  Last year, Navy jumped out to an early lead and Notre Dame just wasn't able to get anything going on offense.  This time, the Irish took Navy out of their game early on.  The spread option offense isn't very good at coming back from 35-7 halftime deficits.

Finally, Navy played a sophomore at quarterback making his first start instead of a third year starting senior.  Trey Miller struggled with his reads on the triple option and even had trouble on the double options.  Kriss Proctor is a senior, so chances are we'll be seeing a lot of Trey Miller the next two years.  Remember, Ricky Dobbs struggled in the 2008 game and lost his first start against the Irish...

But I wouldn't worry too much about that.  This was the type of game Notre Dame should always play against service academies.  The Irish pushed the cadets up and down the field and just dominated them on both sides of the ball.  Diaco also deserves a lot of credit for getting the team ready to play.  The scheme against Air Force wasn't great, but I wonder if maybe Diaco was holding back for Navy.  Either way, I'm sure Irish fans are happy to finally dominate Navy and stop the losing skid.  Now let's win 43 more.