Share All sharing options for: "Chasing Ghosts" and the Air Force Falcons

I have an easy job this week.  The Coach already did a great job of previewing Air Force, so there’s not much for me to write about.  But Whiskey runs this site with an iron first, so the post must go on.  What I’ll do here is break down some of the more interesting plays Coach mentioned earlier.  Think of this as a compliment to his post rather than a separate preview.

Air Force runs a lot of their plays out of the flexbone.  This might worry some Notre Dame fans because that’s what Navy uses exclusively in their offense and seeing that formation might cause some people to curl up in the fetal position and rock back and forth (hopefully Bob Diaco isn’t one of them).  But we’re not playing Navy this week.  I repeat: WE ARE NOT PLAYING NAVY.  Air Force doesn’t run the veer triple option very much (or at least didn’t show it against Navy), so they’re not that similar to the Midshipmen.  They do like to run a lot of misdirection and line up in a variety of formations, though.

Anyone that watched the Air Force/Navy game probably noticed the three player I-formation the Falcons used. 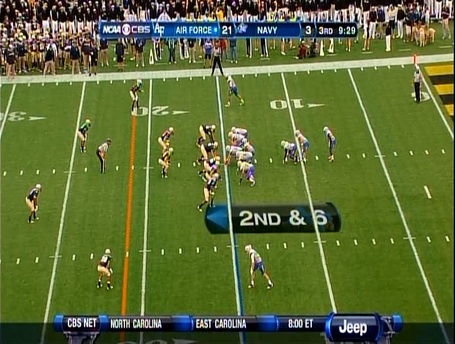 Coach referred to this as their "Capital I" formation.  Like Coach mentioned, Air Force head coach Troy Calhoun makes you "chase ghosts" on defense.  This is one such example.  The unusual formation is used mostly to confuse the defense.  Air Force didn’t do anything special; it was just used to present a different look to the defense.  One of the plays Air Force ran out of it was just a simple iso run. 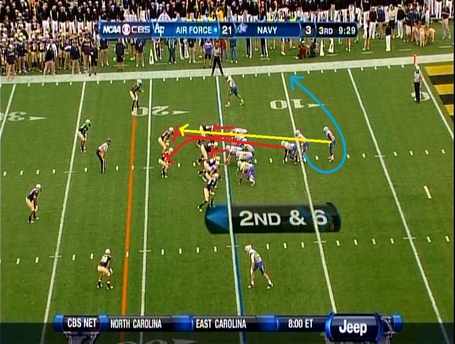 The play is very simple so I won’t insult you guys with more pictures.  The center and tackle block the defensive tackle and defensive end while the guard moves up to block a linebacker.  The first player in the stack acts as a fullback and blocks the other linebacker.  The last player in the stack takes the handoff.  The middle player sidesteps to his left and then loops around the other way behind the running back.  This is done just to throw off the defense while they run a common play.

One interesting thing the Falcons did do out of that formation was run the option.  As Coach said, the Falcons didn't run the veer much against Navy.  In fact, I would consider this play a midline rather than a true triple option veer.  In the midline, the defensive tackle is optioned.  If he stays on the quarterback, Tim Jefferson, the QB, will hand it off the fullback.  If the tackle crashes, the QB will pull the ball and run around him.  Because Navy is in a 3-4 defense, one of the defensive ends is the optioned player. 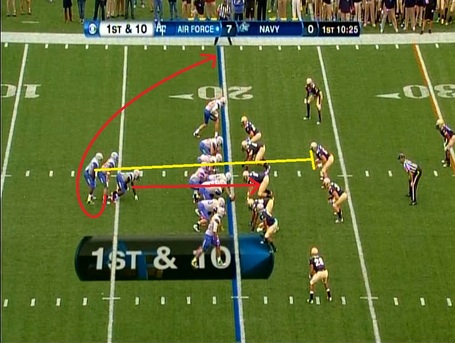 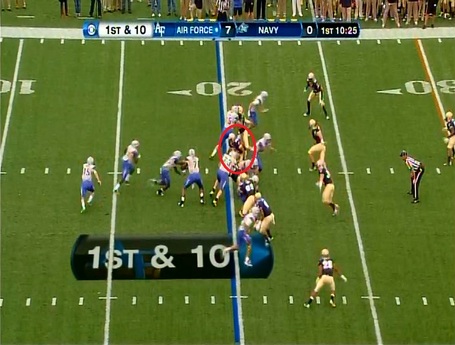 The circled player is the optioned player.  He crashes on the fullback so the quarterback keeps it.  The reason I think this is a midline rather than a veer is because you can see the outside linebacker being blocked by the tackle.  In the veer, he would be left unblocked and optioned off after the defensive end. 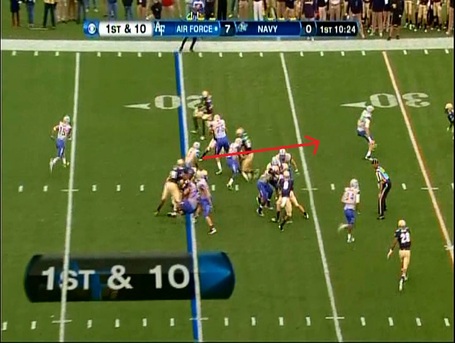 Jefferson pulls the ball and follows his blocker through the hole for 12 yards.  Air Force might as well have run that play out of the flexbone or a normal I-formation.  The big formation didn't change anything.

Finally, I want to breakdown the "reverse option pitch" play Coach talked about.

This play is run out of the normal flexbone. 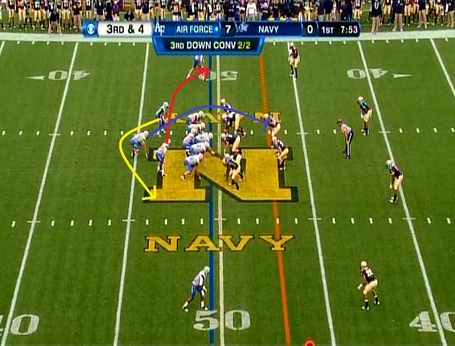 The A-back with the yellow arrow goes in motion before the play.  The B-back blocks the linebacker and the other A-back cuts across the formation to act as the pitch man. 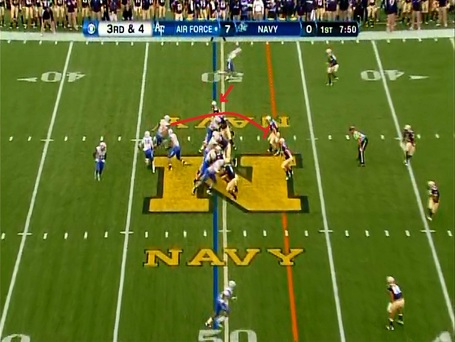 You can see the fullback running around the end, but he doesn't block the outside linebacker (the player with the arrow).  Instead, he continues on to block one of the middle linebackers.  Jefferson makes a half-hearted fake pitch and then reverses field. 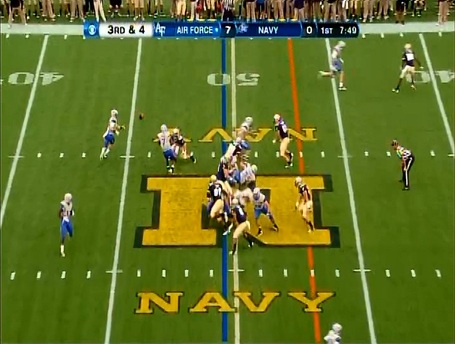 The outside linebacker attacks Jefferson so he pitches the ball to the A-back.  He gets the edge and picks up 22 yards.

There are some more ghosts to chase in this play.  The motioning A-back and fake pitch are used to get the defense flowing away from the direction of the play to open up the edge for the QB and pitch man.

So that's a quick rundown of some of the things Coach talked about earlier.  As for me, I think Notre Dame can stop this offense.  They don't run a ton of option plays and I think our defensive line should dominate this much smaller offensive line.  Like Navy, Air Force uses a lot of cut blocks, so it will be important that our linemen and linebackers get off their blocks.  The most important thing will be stopping Air Force on first down.  It will be much harder for Air Force to consistently pick up first downs and go on long drives if they're constantly in 2nd and long and 3rd and long situations.  On offense, Air Force will need to pick their poison.  They won't be able to stop this run game without loading the box, but that will leave Michael Floyd and Tyler Eifert open.  If the Falcons try to take away the pass game, Cierre Wood and Jonas Gray might run for 300 yards... each.  Air Force isn't that good you guys.  We can beat this team easily.