Purdue Review: Getting to the Edge

Share All sharing options for: Purdue Review: Getting to the Edge

The game against Purdue wasn't quite as interesting as the Pitt game.  There wasn't as much of a "back and forth" chess match between the opposing coaches.  Part of the reason for that was the big lead the Irish jumped out to, and part of it was the Purdue coaches refusing to change anything, taking the "forth" away from the "back and forth."  No matter how badly the Irish gashed the Boilermakers, Purdue didn't really change anything.

I may be a little hard on Purdue, but they put on a clinic on how not to defend Notre Dame.  Based on their alignment, they had no interest in stopping the run.  It also took them almost an entire half to start doubling Michael Floyd, so they didn't have much interest in stopping him either.  Unlike Pitt, Purdue didn't really try to hide their coverages and didn't do much to disguise their blitzes when they brought them.  This led to Rees finding his receivers and the offensive line keeping Rees upright.

What I really liked about Brian Kelly's game plan was his dedication to getting the running backs on the edge in space.  Last week, a lot of us here at OFD were wondering why there were so few runs on the edges.  Kelly seemed to ditch the power running schemes he installed early in the season and went back to his old spread principles.  The Irish didn't run a single zone and didn't use any double tight end sets.  Instead, Kelly spread the field with three or four receivers and ran it to the edges with a lot of success.  The Boilermakers didn't stack the box, so there was a lot of room to run.

So let's talk about how Purdue defended the Notre Dame offense. 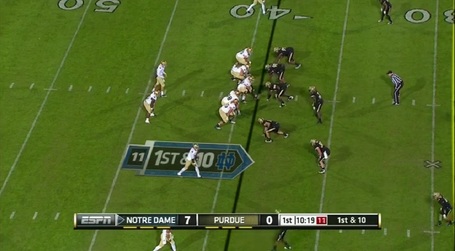 For almost the entire game, Purdue showed the same look on defense.  When the Irish went with four receivers like in this play, Purdue would line up a linebacker right over the center and cover the receivers in man coverage.   This put five men in the box against five offensive linemen with almost no one to the boundary side, a matchup Notre Dame will take every time. 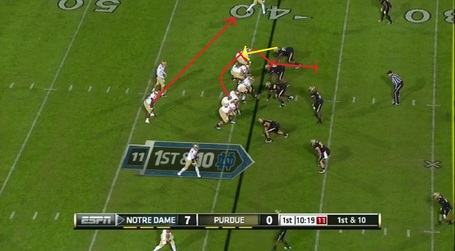 Notre Dame will run a trap play on the defensive end.  I don't think Purdue defended this well once all night. 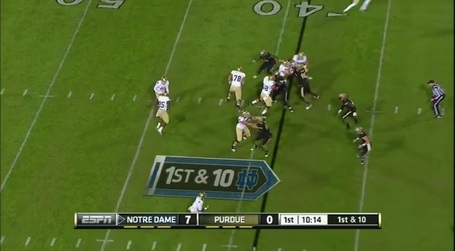 Zack Martin and Chris Watt double the play side tackle, leaving the play side end unblocked.  Trevor Robinson pulls and throws a trap block on the end. 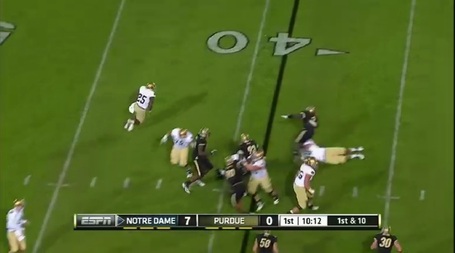 Martin moves up to the next level and cuts the linebacker.  Because Purdue shifted all of their defenders to the field side to cover the three receivers, there's no one there to tackle Jonas Gray. 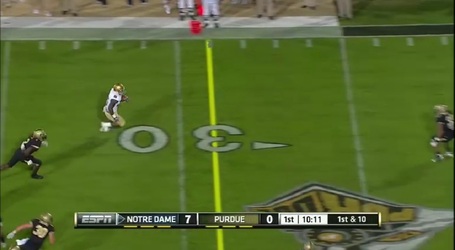 No one is even close to Gray until he crosses the first down line.

The idea behind that play is pretty simple: move all of the defenders to one side and then run away from them.  One criticism of playing primarily out of the shotgun is the way it tips off the defense to the direction of the running play.  It is much easier for the running back to go across the quarterback than to run the other way.  Consequently, defenses may shade players away from the running back, expecting running plays to go in that direction.  Purdue didn't do that.  Notre Dame threatened run to the side Purdue didn't have any defenders and they didn't do anything to stop it. 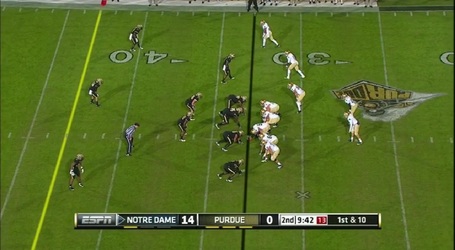 In the second quarter, Kelly started putting Tyler Eifert on the line instead of flexing him out wide.  Purdue responded by putting the linebacker covering him right over him and continuing to put another linebacker right over the center.  By lining up Wood to the same side as Eifert, the Irish continued to put Purdue at a disadvantage versus the running game.  There are six and a half defenders to the boundary side (counting the linebacker over the center as half), leaving only four and a half to the field side.  That's a lot of empty space for Cierre Wood. 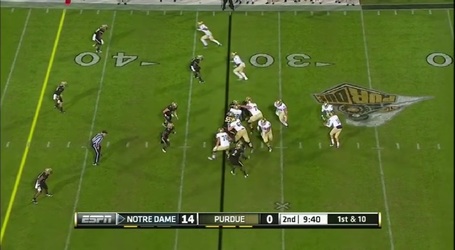 The Irish run the exact same trap play as before.  Watt gets a good block on the tackle so Martin immediately goes up to the linebackers.  Robinson makes the trap block and Eifert comes across as a lead blocker. 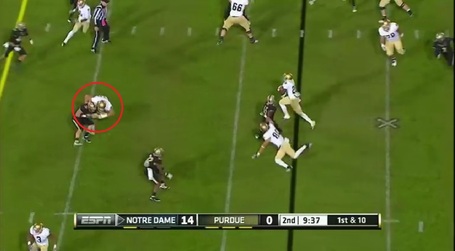 Eifert doesn't so much block the linebacker than inconvenience him, but Cierre Wood has so much space it doesn't matter.  Also, look at the circled player.  That's Zack Martin.  Look at where he was in the picture before.  In about the same time it took Wood to hit the hole, Martin engaged with the linebacker, reversed field, and drove him halfway to the other hash marks.  Oh yeah, Martin also weighs about 100 pounds more than Wood.  That's quite a play by the junior tackle. 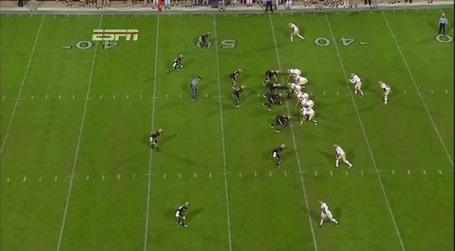 This is the play where Wood scored his 55 yard touchdown.  The announcers completely missed this, but Notre Dame went unbalanced here.  From Rees's left to right, the line is Martin-Dever-Watt-Cave-Robinson-Eifert.  Purdue continued to line up a linebacker over Eifert, so Kelly flipped him with Dever, taking a defender away while putting an additional offensive lineman on the play side. 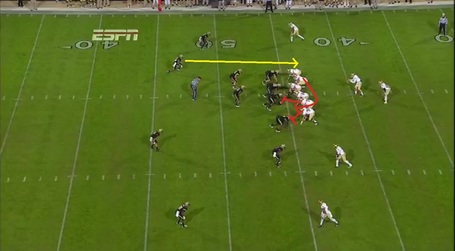 Dever and Martin seal off the play side tackle and end and Robinson pulls as a lead blocker through the resulting hole.  Purdue brings a safety blitz in an attempt to stop the run, but the Irish run a counter away from it. 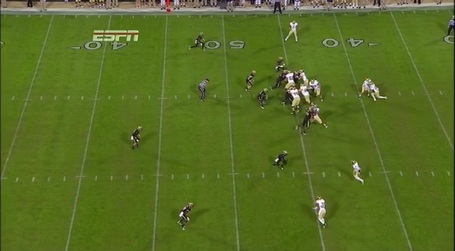 As usual, Dever and Martin open up a big hole. 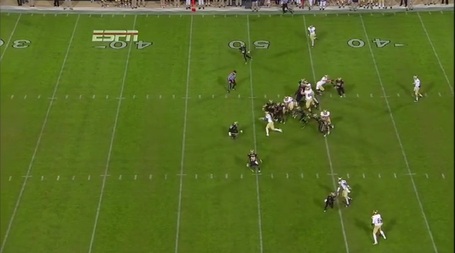 Wood cuts through the hole, makes the safety miss, and is off to the races.  The other safety maybe could have helped limit the damage, but he was busy running a useless blitz.

So that's how you allow Notre Dame to almost rush for 300 yards.  This offensive line is too good to try and stop the run with only five or six men in the box.  As I said before, Purdue didn't really change anything in the second half, even after getting run up and down the field.  They started to blitz more, but none of them got to the quarterback.

This game, along with the game last week against Pitt, reaffirms my confidence in Kelly as a play-caller.  Honestly, with the way ND physically dominated Purdue, Kelly could have fired up my copy of NCAA 06 and hit "Ask Corso" before every snap and probably still would have put up 500 yards, but Kelly has been very good at finding something that works and then going to it over and over.  I didn't count, but Notre Dame must have run that trap play about ten times and probably averaged around ten yards a carry on it because Purdue just refused to defend it.

I was a big fan when Kelly started using two tight end sets and going to a traditional "power running" scheme, but with Mike Ragone gone, I just don't think this team is built for that.  Wood and Gray have been great in space, so I think this shift back to a more spread-heavy offense will be beneficial in the long run (haha, get it?).  The real question will be whether Tommy Rees can make teams pay over the top if they sell out to stop the run.