The Tampa Two Defense and the USC Trojans

Share All sharing options for: The Tampa Two Defense and the USC Trojans

I'll be honest - when I first saw the headline at Rakes of Mallow (RIP) saying Lane Kiffin was hired as head coach at USC, I assumed it was a joke.  I thought to myself, "Well, that's kinda funny, I guess.  I would have gone with something like Lord Voldemort, but I guess I'll see what CW has to say."  But then I noticed a lack of jokes and suddenly came to the realization that it was real.

Lane Kiffin is a talented offensive mind and calls a pretty good game when he isn't going for two at stupid times, but his track record as a coach left me underwhelmed when USC hired him.  But what did worry me was hearing that his dad, Monte Kiffin, was following him to Los Angeles.  The elder Kiffin was a longtime NFL defensive coach, probably most well-known for his time as Tampa Bay's defensive coordinator where he perfected what became known as the Tampa Two.

But first, let's start with some background.

One of the most widely used defensive schemes is the Cover 2.

The concept is pretty simple.  The scheme is named for the two safeties that each covers half the field.  It's a versatile defense: you can play zone or man beneath the safeties and blitz any way you want.

With the Cover 2 so prevalent throughout football at every level, there are plenty of ways to beat it.  Chris Brown at Smart Football wrote an excellent article on how to beat Cover 2 out of trips formations.

The typical strategy is to attack the safeties and to put them in a position where they always leave someone open.  One good example is the "smash" concept paired with a seam or post up the middle. 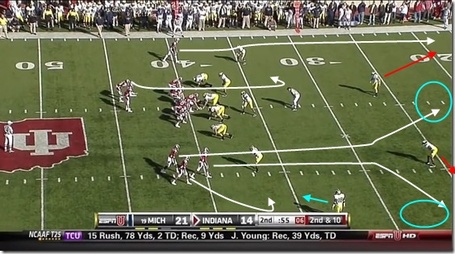 The smash concept is a combination of a corner route with a hitch underneath it.  This creates a vertical stretch of the cornerback.  Both routes attack the sidelines away from the safety, meaning the corner has to decide which route to cover and one will be left open.  The smash can be stopped if the safety overplays the corner route, but if the smash is paired with a seam or post route up the middle, the safety is now also stretched between the seam and corner.

But there's way to counter the counters to the Cover 2.  That would be the Tampa Two.

In the Tampa Two, the defense shows a Cover 2 shell, meaning the defense leaves two safeties deep like in a Cover 2.  But at the snap of the ball, the middle linebacker bails back into coverage.  Suddenly, the defense has three deep defenders.  The routes that beat Cover 2 don't work as well against the Tampa Two.

Let's look at that smash route against the Tampa Two.  With the middle linebacker bailing out into coverage, there's now a defender to cover the seam route.  The safety, who now only has to cover the outside third of the field, can cover the corner route, thus freeing up the corner to take out the hitch.

The Tampa Two gives the offense a Cover 2 look, possibly baiting them into a play that is designed to beat the Cover 2. 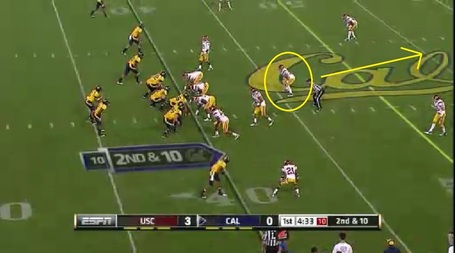 Chris Galippo, the middle linebacker, lines up slightly deeper than normal.  At the snap, he bails backwards into coverage. 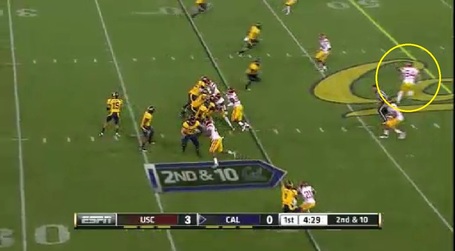 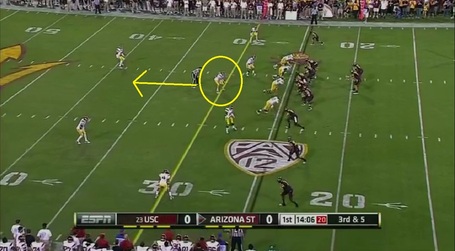 That looks like a pretty typical Cover 2.  The only thing that might tip off the quarterback is the deep positioning of the middle linebacker.

Look at the field after the snap: 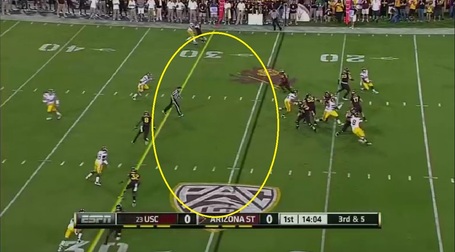 This is one of the weaknesses of the Tampa Two.  The middle of the field tends to be open underneath.  With the middle linebacker dropping back into coverage, the spot he used to occupy is going to be open.

That leads into the ways to beat the Tampa Two: attack it underneath.  The Tampa Two leaves only four shallow defenders, so if the offense employs five receivers, someone will be open short.  Slants and stop routes into the space vacated by the middle linebacker may also be open.

It is a bend, don't break defense. It is designed to ALLOW underneath stuff.

It forces the offense to dink and dunk its way down the field, counting on them to make a mistake at some point.  Michigan played that strategy perfectly against the Irish.  Notre Dame drove almost at will against them, but kept turning the ball over at very inopportune times.

So the big keys on Saturday will be to take those short gains, only take deep shots when they're open, and to play disciplined.  Penalties can kill a drive against this type of defense and I'm sure I don't need to explain the consequences of turnovers to an Irish fan.  If Notre Dame takes advantage of opportunities and capitalize on visits to the red zone, ND should win this game fairly easily.  But if the penalty bug doesn't go away, it could be a long night.