Share All sharing options for: OFD Bye Week Round Table: Part One

Since it's the bye week and there will be no opponent previews and posts related to a game this weekend, we wanted to take this opportunity to generate some discussion about the Notre Dame season so far.

We threw some questions out there between our writers and came up with some good answers to debate.

This is part one, with the final post coming on Friday.

Enjoy the bye week and get ready for USC week.

Question: Which non-RB prospect is at the top of your recruiting wishlist going into Signing Day 2012?

4pointshooter says: Of course everyone wants the elite skill players who'll make plays with the ball and Keith Marshall is at the top of the wish list (cue sweatpants and sh*t flipping), but oh... non-RBs you say?

Well Dorial Green Beckham is literally the biggest fish out there, right? 6'6"/220 with bear paws as hands and blazing speed---but this class already features a good group of WRs (especially if the Irish can continue to make inroads with Nelson Agholor) and DGB's interest in the Irish is speculative at best.

So if I'm looking at need as part of the wish list, I'm gonna have to go with Shaq Thompson---a 5 star safety prospect out of Sacramento, CA. Thompson---who'll be on campus (along with more than a dozen other elite prospects) for the USC game----is an instinctive, athletic and skilled player with outstanding size and strength for the position as well (6'2"/210).

In NCAA 12 terms Thompson has B+ speed, A- acceleration, A tackling (BIG HITS!), and B+ coverage skills- this is definitely a guy you spend 60 minutes on every week- unfortunately, right now it seems like his "proximity to home is VERY HIGH" as it seems like the ND is behind Cal and Washington in his list.

With Harrison Smith, Gary Gray and RJ Blanton (and potentially even Jamoris Slaughter) all leaving after this season, the Irish have a dire need for an impact player in the defensive secondary, and Thompson may be good enough right now to start against Navy at Dublin next September.

Question (for the Coach): Did Coach Diaco follow your advice in defending the option? What scheme did the Irish use to defend Air Force's iteration of the option? Why were we so slow to get to the pitch man? Do you anticipate that the Irish will use the same defensive scheme to defend Navy's more traditional triple option?

The Coach OFD says: I went back and rewatched a few series of the game this afternoon. Notre Dame's interior three guys on D did a great job of shutting down the FB. But, the problems on the edge were glaring.

I think the most obvious thing was Diaco's decision to "slow play" the QB with his OLBs. The bottom line, when you play the QB this way on the option is that the OLB ends up doing absolutely nothing. He ends up being a wasted guy just sort of standing around out there.

Again, I think those OLBs should attack the QB fast and hard when he heads for the edge. The QB should be a little skittish after he takes a few good pops from those OLBs. One thing that most people don't realize is that the issue is still in doubt as long as the QB has the ball. He can still keep the ball and run, or he can pitch it or he can throw it.

Slowplaying the QB just extends the doubt. If the QB is made to pitch the ball immediately, then everybody knows that there is only one thing left to do and that is run to the pitch. Te'o was getting blocked by a TE or slotback a lot of times and thus he was having trouble getting to the edge. But, on more than one occasion, I saw Te'o pursuing down the line to the edge, yet still looking back at the FB dive.

For Te'o, as long as the QB has the ball, he can still keep it and cut back underneath you. I think all this made his pursuit to the pitch a little tentative. I think he had a little too much to think about. For sure, Harrison Smith was late arriving to the scene of the pitch.

To begin with, ND was playing their safeties very deep, making it harder for them to get to the pitch simply by alignment. Also, like Te'o, I think he was waiting to see that the pass threat had been eliminated before he ran to the pitch. That is another reason why that threat needs to be eliminated immediately.

Up front, Notre Dame had success sliding their front to give it more of a 4-3 and sometimes even a 6-1 look. That was good to see. On AFA's first offensive play of the game, both of ND's inside linebackers stood there, looking at the fullback, and offensive guards fired out on them and cut their legs out from under them.

I was very fearful when I saw that. But, as I said, ND started to do some things with their front to keep offensive linemen off their ILBs That seemed to help Te'o a little bit.

Bottom line...ND did a pretty good job with the FB and the QB, but they could have done a much better job of shutting down that pitch man.

Of course it would be pure speculation for me to say if Diaco will take this same defensive game plan into the Navy game. Again, up front, moving people around and protecting his ILBs a bit, that strategy was pretty successful. Those DEs and Nose squeezed down the B and A gaps pretty effectively. I would hope that Diaco would continue with that strategy and show Navy some different looks up front.

Again, I'm in favor of going a step or two further and showing a couple more looks and running a few stunts, slanting and pinching those interior three guys and running one ILB through A or B gaps occasionally. I have always believed in playing "attack" defense and set the offense back on their heels a bit and make them do a little thinking on their feet.

Anyway, what ND did up front was good and I would hope they would bring more of the same against Navy.

Whatever the responsibilities are, that option on the edge should be forced immediately. If nothing else, the QB should get a little leery of being popped by that OLB. I would think that the vast amount of yardage that ND gave up to AFA on Saturday would have Diaco scratching his head a little looking for answers.

But again, regardless of how it is done, if the FB and QB are eliminated as threats, those are huge steps to having a successful game against a tripple option team.

Question: You have the opportunity to fill one position on Notre Dame with an All-American out of thin air for the second half of the season. Which position do you choose, and why?

CW says: I think you can go two directions here. The first is to solidify the defense, which you could do by getting a play-making defensive back, either at corner or safety.

Save for the meltdown in Ann Arbor, the back end of the Irish defense has done a good job of eliminating the "big chunk" plays, but hasn't really caused a lot of turnovers. If you inserted a ball hawk like Tyrann Mathieu into the lineup, teams would have an even harder time moving the ball down the field.

The other direction is to take the offense to the next level by replacing Tommy Rees with Andrew Luck.

With Luck's size, mobility, accuracy and arm strength, he'd turn Kelly's offense into a war machine. The only problem with putting Luck in for the remainder of the season is that it will cost both Tommy Rees and Andrew Hendrix valuable game time that will benefit this team in 2012 and beyond.

As enticing as it is to bring in the preseason Heisman favorite, I'll take the Honey Badger and take this defense to another level while letting the offense grow naturally in the sophomores' hands.

Question: Would you rather have beaten South Florida (who are no longer ranked) and still be undefeated at home, and still have lost to Michigan? Or would you take a victory over Michigan at all costs with a loss to South Florida?

CW says: The latter, and it's not close.

The loss to South Florida won't be remembered in a few years. This stupid, almost incomprehensible streak of losing to Michigan in the final minute has to be some kind of NCAA record. I'm already trying to come up with scenarios where the Irish get a rematch in the postseason. Victory over the Wolverines by a mile. 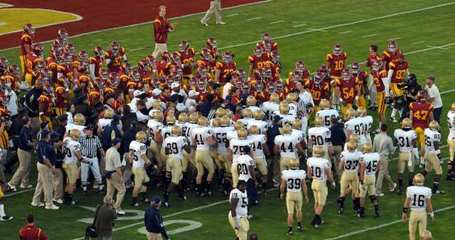