Surprise!  You get another breakdown of the Air Force game from me.  Since I don't have a game to preview this week and I have to fill this space with something (Whiskey gets... upset... when we don't get posts up.  We're actually on our third "Eric Murtaugh."  We just thought it would be easier to keep the name the same so as not to confuse our readers.  I think I've said too much.), you get a double dose of Air Force.

I think it would be safe to say Air Force came out and did exactly what everyone expected them to do against the Irish.  They showed a multitude of formations and gave Notre Dame a healthy dose of the option.  Air Force ran the triple option only twice against Navy; against Notre Dame, they ran it at least ten times (I stopped counting once Air Force put in their backup QB).  They also ran the speed option nine times and threw the ball 24 times (again, only counting snaps with Tim Jefferson under center).  That was pretty much their entire offense.  They filled the rest of the game with an assortment of reverses, dives, tosses, and power runs, all of which Notre Dame defended fairly well.

So let's look at how Notre Dame defended the triple option and the speed option, since those plays translate the most to ND's game with Navy in a few weeks. 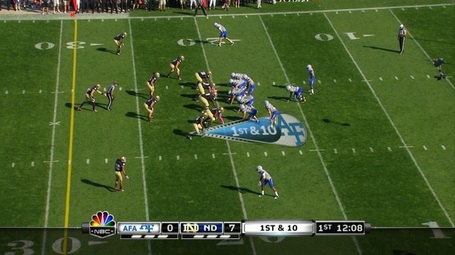 This is the first play of the game for the Falcons.  Air Force comes out in what I call their "Army" formation because it resembles the wishbone/wing-t-ish formation Army likes to use.  Notre Dame comes out in the same defensive formation they used against the Black Knights.  The Irish have four down linemen and Jamoris Slaughter and Zeke Motta playing outside linebacker.  Harrison Smith patrols centerfield. 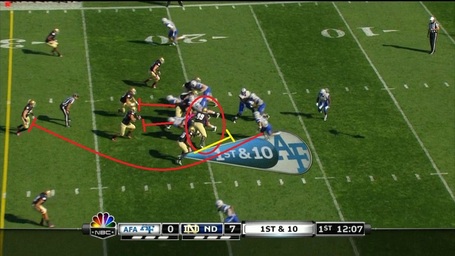 Here's the mechanics of the play.  Kapron Lewis-Moore is the first player to be read.  He crashes, so Jefferson pulls the ball.  Jamoris Slaughter, playing the role Robert Blanton played against Army last year, comes down as the second read and forces the pitch.

Here, the Irish are falling into their old habits.  The middle linebackers wait too long to react and get cut before they can do anything.  The Irish did a good job of shutting down Army because they got those linebackers outside to make a play.  I'm guessing the coaches were so afraid of the pass that they wanted the linebackers to make sure the play was a run before they reacted.  It cost them here.  Harrison Smith tries to come down, but the wingback is able to block him before he can do anything. 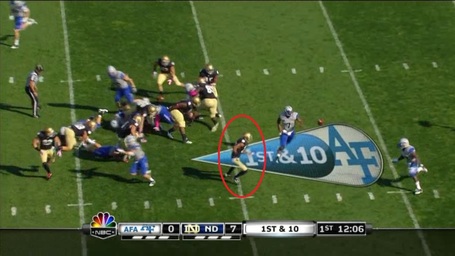 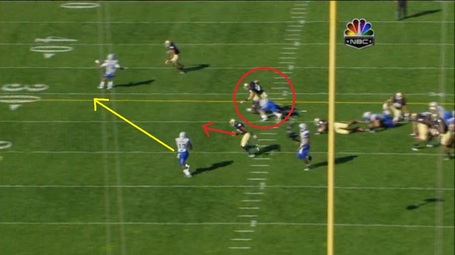 ...and there's no one to keep contain.

Let's look at that again from a different formation. 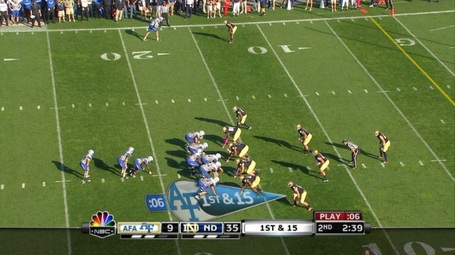 Air Force is lined up in what The Coach called their "Capital I" formation.  Notre Dame is still in their 4-4 stack. 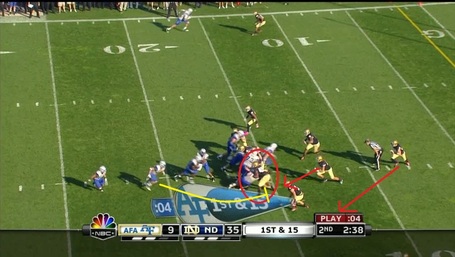 This play was a little more schematically interesting.  The middle player in the backfield stack acts as a blocker for the QB and pitchman.  Unlike the last play, Dan Fox attacks the line quickly instead of hanging around waiting to be blocked.  Harrison Smith is also reacting sooner.

Darius Fleming crashes on the fullback, so Jefferson pulls the ball.  Motta comes down to force the pitch. 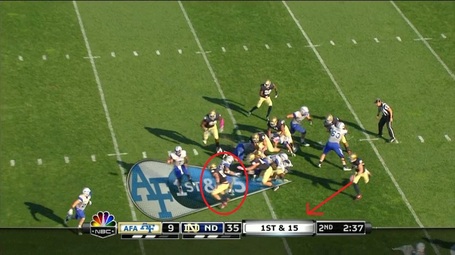 Dan Fox's actions seem a little strange.  He doesn't go after the QB or pitchman, but instead makes a nice form tackle on... a blocker.  At first, I thought Fox horribly misread the play, but I think his actions were by design.  I think his job was to take out a blocker to free up Smith and Motta.  Blanton did the same thing against Army.  Sure enough, Hayseed stops the play for minimal gain.

Unlike the first play, that time the Irish got the linebacker involved and actually had defenders to cover every option.  In the first play, Slaughter was tasked with stopping two players.  That's never going to get it done against an option team.  I understand the defense had to watch out for the pass in this offense, but there's no way to stop the option with a scheme like that.  The second play was a much better example of how to successfully stop the triple option.  It was little disheartening to see the defense go away from what worked so well against Army when Air Force came out running the exact same play they successfully shut down last year.

Let's shift gears and switch over to the speed option.  Unlike the triple option, there is no fullback option.  The quarterback is just trying to get outside as quickly as possible (thus, "speed" option) to punish the defense for clogging the middle against the fullback.  Only one player is optioned, typically an outside linebacker, and the quarterback either keeps the ball or pitches it. 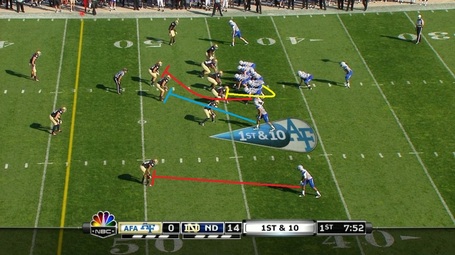 The blocking on this play is fairly straightforward except for the trap block on the defensive end.  The offense tries to make the play look like a triple option.  The playside tackle doesn't block the defensive end and moves up to block Dan Fox.  The guard next to him loops around and throws a trap block on the end.  The slot receiver blocks Manti Te'o.  Slaughter, the optioned player is unblocked. 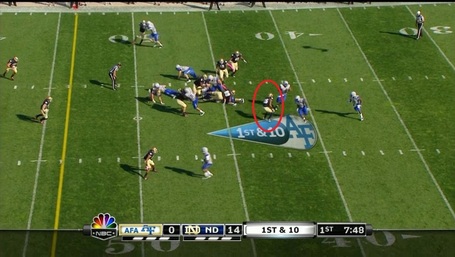 Slaughter comes down on the quarterback, who pitches the ball.  The fullback acts as a lead blocker.  You can see there is no one on the edge after Slaughter. 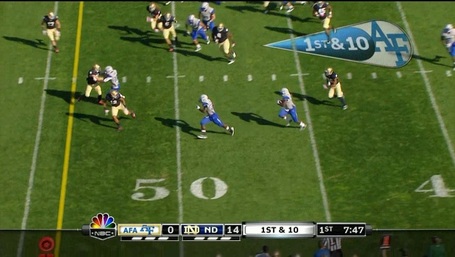 There's no one in position to tackle the running back, who still has a lead blocker.

The Irish did make one adjustment to help defend the pitch. 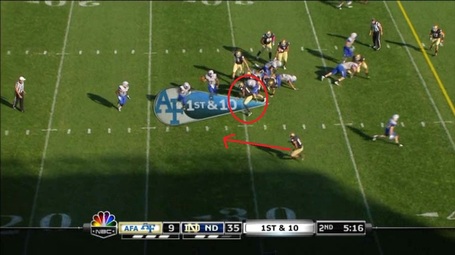 Diaco started having Blanton come off the receiver and attack the pitch man. 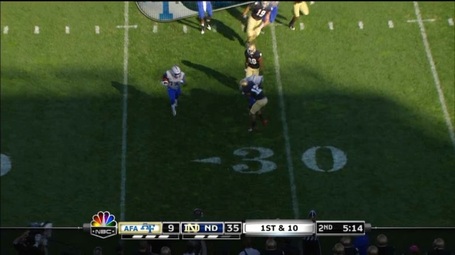 Blanton is able to fight off the block of the fullback and tackle the running back.  This helped a little bit, but didn't always work.  If Blanton gets blocked, there still isn't anyone behind him.

Of course, Air Force had a simple answer for this. 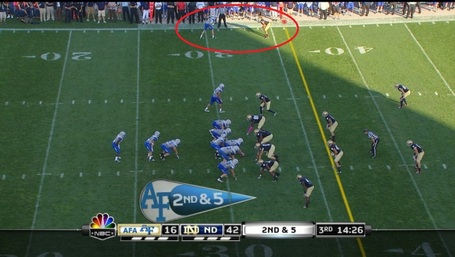 They just put the wide receiver as far away from the play as possible.  The corner can't help out when the play is happening on the other side of the field.

There's been a lot of talk about the Irish defensive game plan, so there's not much more for me to add.  Diaco's goal clearly wasn't to shut down the Air Force offense.  They could get their yards between the 20's, but the defense would stop them in the red zone.

The way the Falcons gained yards may have given fans flashbacks to the Navy game last year, but I think the Irish did a better job than in that game.  The Falcons gained a lot of yards but, outside of a few exceptions, the defense limited the big plays and did a good job of keeping Air Force out of the endzone.  Navy ripped off big chunks of yards with the fullback, but Notre Dame shut down Air Force's fullback and the quarterback.  The running backs gained yards, but that was by design.

I think, against Navy, the Irish will use a similar defensive scheme but with some slight tweaks.  Navy's quarterback, Kriss Proctor, isn't nearly as good a passer as Tim Jefferson.  The Irish won't need to worry about the pass nearly as much as they did against Air Force.  If the Irish can get the linebackers or other players out on the edges, Notre Dame should do all right versus the Midshipmen.  I think Navy is better than Air Force, but I doubt they're 27 points better.