So I think everyone was pumped to see Andrew Hendrix see the field for the first time against Air Force.  Tommy Rees is still the established starter, but it's hard to deny that Hendrix and Everett Golson are the future of the Notre Dame offense (when that future begins is up for debate).  For the first time, Irish fans caught a glimpse of what that future holds.  Let's take a look at Hendrix, snap by snap, and see how he did against the Falcons.

Kelly calls a very simple bubble screen on Hendrix's first career snap.  It gives Hendrix an easy play to get him into the groove while showing Air Force he won't just run the ball. 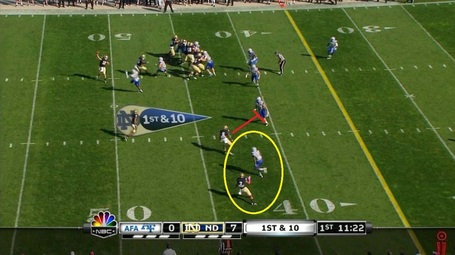 There's some miscommunication between Theo Riddick and TJ Jones over who's blocking who.  Jones lets the circled player through and almost gets Michael Floyd killed.  Luckily, Floyd is half-tyrannosaurus and can take that hit without fumbling.  It goes for a loss of three.  The Andrew Hendrix Experience* gets off to a rough start.

*I can't take credit for that awesome nickname.  I think I saw it on Twitter, so mad props to whoever coined that. 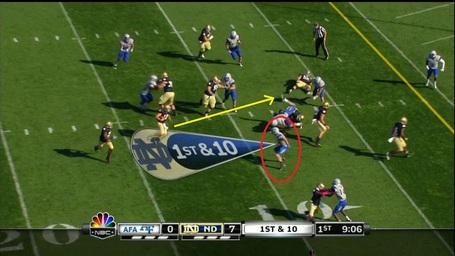 Kelly lets Hendrix air it out on this play. 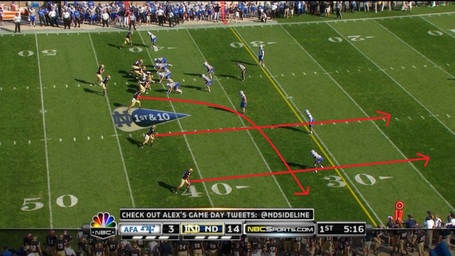 This might be the easiest read in the playbook.  Jones and Riddick go deep and Tyler Eifert fills in behind them on an out route. 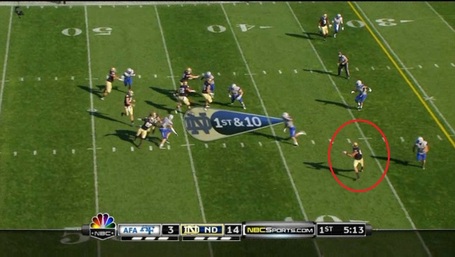 Hendrix rolls out and makes the easy throw to an open Eifert.  The pass is a little behind him, but it ends up helping him shake a tackle and get up field.  The play goes for 23 yards.

This was a fun play. 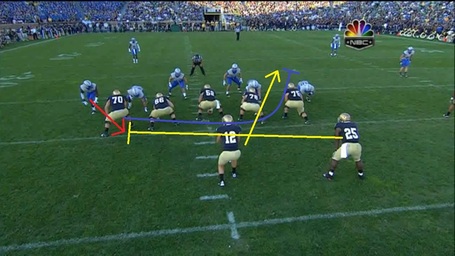 Hendrix fakes the handoff to Jonas Gray, who blocks the crashing defensive end.  Zach Martin pulls from his tackle spot and leads the way for Hendrix.  You might recognize this play as the counter run play Notre Dame frequently runs but with the QB carrying the ball. 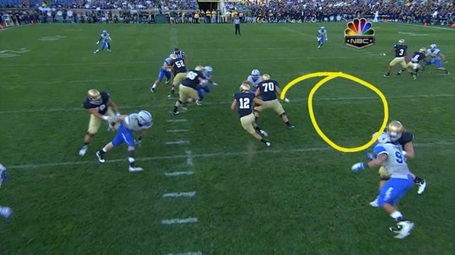 The blocks are good all around.  Hendrix cuts back to the left behind Martin and gains 14 yards.  I would have liked to see Hendrix follow Martin's block because there was plenty of space to his right.

Kelly calls the same pass play as before. 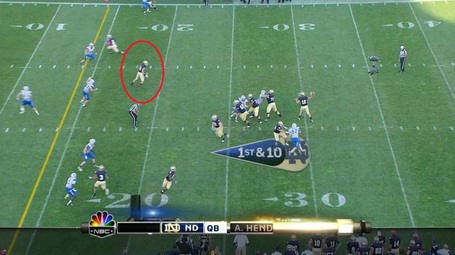 Hendrix makes the easy throw to the wide open Eifert and picks up 6. 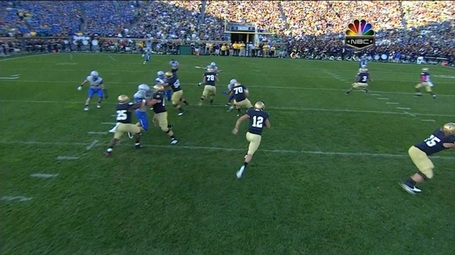 Look at that hole.  As Mike Mayock would say, "Are you kidding me?"  Hendrix picks up an easy 12 yards.

Here's our first taste of the zone read. 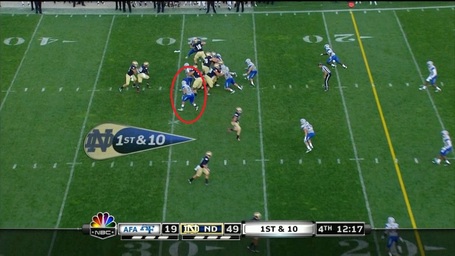 Hendrix reads the backside defensive end.  I'd say it's borderline as to whether Hendrix should give or pull here.  The end is crashing, but he's keeping his distance outside.  Hendrix gives it to Gray, who only picks up two yards.  I won't fault Hendrix for this play; Christian Lombard doesn't make a very good block and the safety is able to come down and make a play.  I guess in hindsight maybe Hendrix should have pulled it, but it wasn't an awful read.

I could be wrong, but I'm fairly certain this play was our good friend, the smoke. 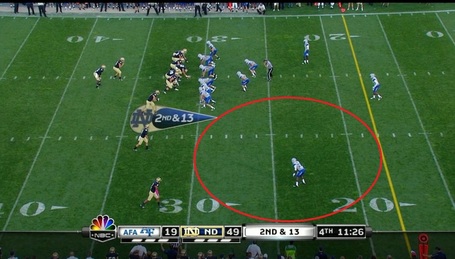 Air Force has eight men in the box and has basically one guy covering the trips receivers. 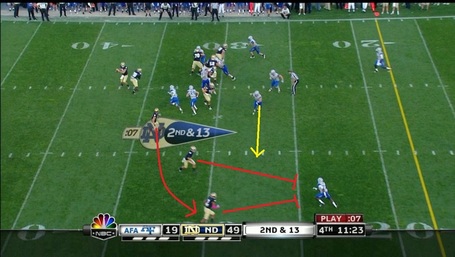 You can see the run blocking and Gray going for the handoff, but Hendrix pulls up and throws the ball out to John Goodman.  This time, TJ Jones blocks the right guy, but Robby Toma makes a mistake.  He goes to block the same guy as Jones and lets the linebacker run free.  The linebacker gets out to the edge and limits Goodman to eight yards when it should have gone for a lot more.

It's the sign of a well-coached quarterback when a sophomore seeing the first action of his career can make that decision.  Yeah, it was a simple check, but Hendrix still made the correct decision and didn't hand the ball off on a doomed run play. 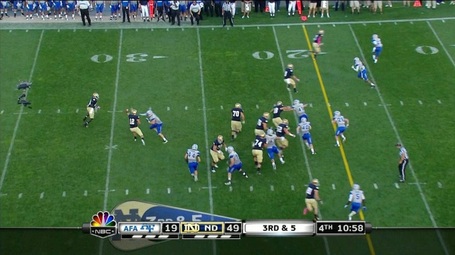 This time, Air Force attacks Hendrix quickly.  Hendrix makes the correct decision and waits until the last possible moment to pitch the ball.  Koyack doesn't make a good block and Cierre Wood is tackled for a gain of only two yards.

Hendrix takes his first snap from inside Notre Dame territory, and boy does he make it count. 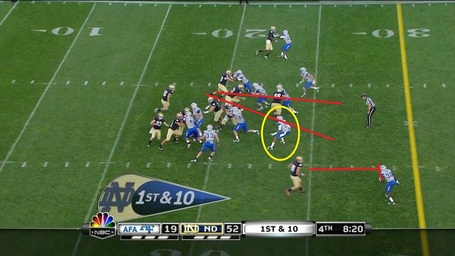 Once again, Hendrix runs the counter run play.  Look at the lane his line is giving him.  The circled player looks like he can make a play, but he decides to go after Cam McDaniel for some reason.  Goodman gets a decent block on him man, and Hendrix rips off a 78 yard touchdown run.

Hendrix hands the ball off to McDaniel twice and Atkinson once.

There's been plenty of discussion about this already here at OFD, but here are my thoughts.

Kelly put Hendrix in a situation where he was unlikely to fail.  He brought him in against an overmatched Air Force defense that didn't really have a shot at stopping the Irish offense.  He also limited Hendrix to about five different plays (zone read, speed option, QB counter, bubble screen, and pass to Eifert).  He ran those plays well, but the Irish rolled up 560 yards of offense and scored a touchdown on six straight first half possessions, so it would have been hard for him not to play well.

So the question becomes, if this is the future of the offense, what happens to Tommy Rees?  Kelly made it clear that Rees is still the established number one quarterback, but I'm sure we'll see more Hendrix as the season progresses.  But what about next season?  Rees put together a pretty good day himself against the Falcons, going 23/32 for 261 and four touchdowns and put together his second straight game without a turnover.  USC will be a good measuring stick of his progress, but it looks like he's starting to come into his own as a quarterback.

So what will Kelly do next year?  I think if ND stumbles to a 7-5 or 8-4 final record, all bets are off and Hendrix and Golson will be given every opportunity to win the starting job.  But if Notre Dame ends up 10-2 or even 9-3, I think it's going to be very hard to bench Rees and go with an unproven player in his place.