I have a real affinity for a quarterback that make plays with his feet. I come by it naturally as I grew up in a house where my Dad ran the wishbone with his high school team.

When The Coach got his first head job he went up to the Air Force Academy and learned it from Fisher DeBerry and his staff. That is one of many stories I need to get him to write up for the site. When I wasn’t watching his kids run it on Friday nights we were watching them do it with an 8mm projector on my bedroom wall. I got to appreciate a quarterback that could turn it up field.

Around that same time there were also several college football powers utilizing running quarterbacks out of option offenses. We got a lot of Big 8 games on TV in West Texas and both Nebraska and OU were tearing it up. Shortly thereafter Holtz was utilizing some option at at ND. So in my formative years I fell in love with running quarterbacks. Simply stated, it worked.

I still love what a running quarterback brings to any offense. I like the old school variants at the Service Academies, and the dual threat/ hybrid types associated with many of the modern spread offenses. I even like an old school scrambler. It adds one more element to the combined arms dilemma that the defense is faced with. You can almost hear the defensive huddle "Where did whoooo goooooo?"

These last few days I have been thinking about the possibility that Dayne Crist might bring that element to life in Brian Kelly’s offense and it excites me. That led to my reminiscing a little bit about some of the greatest running quarterbacks I have had the pleasure of watching play college football. Below is a list of what I consider to be the best running quarterbacks I have watched in my lifetime. I was watching in earnest by the mid 80’s so I didn’t list anyone that played prior to that. I thought it might make for something to discuss other than realignment and super conferences for a day or two. I will be interested to see what you think.

First things first. I didn't set out to identify a particular number of these guys. I just came up with a list of guys that I thought were the best running quarterbacks. There just happens to be twelve of them. When I ranked them I took into account their overall effectiveness and how much I thought they personally meant to the overall success of their respective team.

While these guys didn't quite make the twelve I did consider them and felt that they rated a mention.

Whoever is starting (Navy)- National treasures running an old school option and running it well. I like watching the mids with the exception of those Weis daggers.

Kordell Stewart (Colorado)- Kordell could run but that bomb to beat Michigan will be forever stuck in my head.

Antwaan Randle El (Indiana)- Had Randle El played anywhere other than Indiana he might have really torn it up.

Now on with it. 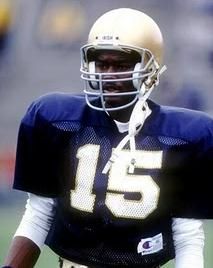 My all time favorite Notre Dame player. McDougal backed up Rick Mirer for three years then as a senior in 93’ he got beat out by freshman phenom Ron Powlus. One freak injury to Powlus later and McDougal led ND on their last legitimate title run. Watching it get derailed by BC still hurts by the way. I loved watching McDougal play, and the fact that it took so much for him to finally get on the field made it that much sweeter. 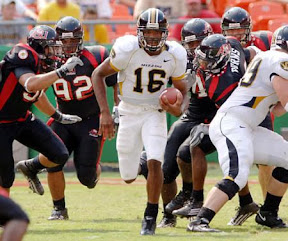 Smith started every game for four years at Missouri and sits behind Pat White as the #2 all time leading QB rusher. Smith was also at the forefront of Mizzu getting competitive. He was a player. 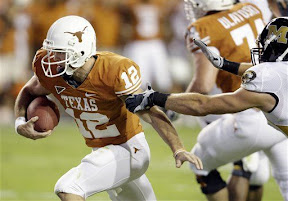 I didn’t really think of McCoy as a runner until I saw him live for the first time at the 2007 Holiday Bowl. When Colt decided to tuck and run he was moving. McCoy finished his career with 1,589 rushing yards but ran for more than 500 yards in both 2007 and 2008. McCoy is the poster boy for running just enough to move the chains and making defense account for one more thing. I hope Dayne Crist took notice. I personally think McCoy's ability to run had more than a little to do with creating space for his 13,253 passing yards. McCoy also finished with 45 career wins which is the most in NCAA history. 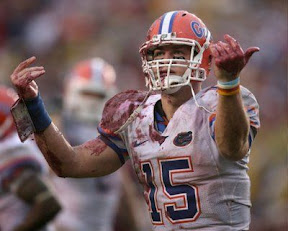 I never jumped on the Teeebus bandwagon but I have to admit the kid could run the football a little bit. He wasn’t necessarily a home run threat but the chosen one would go full on bull in a china shop style to pick up a first down or get six. I have to give him credit for that. He also happened to win a lot of football games. Enough on him, I’m sure Dimes will provide additional stats and love in the comments. 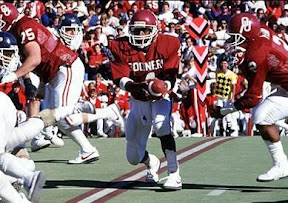 Holieway took over as a freshman in 85’ when Troy Aikman broke his leg. Next thing you know he led the Sooners to an 11-1-0 national title and Aikman finished his college career at UCLA. Holieway hurt his ACL in 87’ and never really recovered but he was a serious factor prior to getting injured. The Sooners were a force to be reckoned with when Holieway was under center. 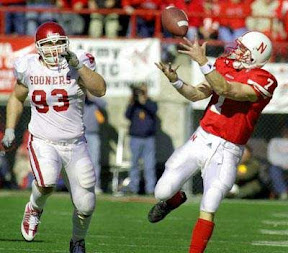 Crouch is one of three QBs to rush for 3,000 and throw for 4,000 in his career. With the exception of that game in South Bend I liked watching him play. I do think his Heisman was a bit of a make up for Tommie Frazier not winning it. 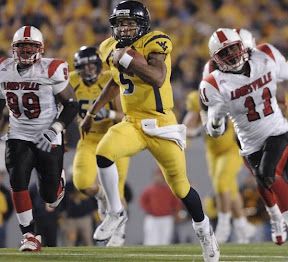 Pat White is to Rich Rodriguez as LaDainian Tomlinson is to Dennis Franchione. Aside from that unfortunate coincidence White was an awesome college quarterback. He is 1 of 2 college quarterbacks to go 4-0 in bowl games (Philip Rivers is the other). With 4,400 yards on the ground White is also the all time leading QB rusher in NCAA history. His overall numbers also include 5,500 yards passing and 104 total TDs. Damn. 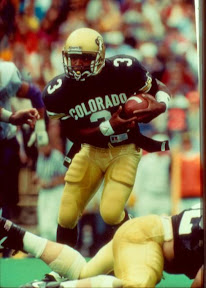 Hagan was the face of the franchise during what I think of as the golden era of Colorado football. The Buffs were scary back then. They did get some help with the 1990 split title from the 5th down call against Mizzu and the phantom clipping call that negated Rocket’s 91 yard TD in the Orange Bowl. I am still bitter about that by the way. Regardless Hagan was a serious factor under center. Back in the PS2 days I loved playing All time ND at All Time Colorado in the snow just to try and stop Hagan and Bienemy. 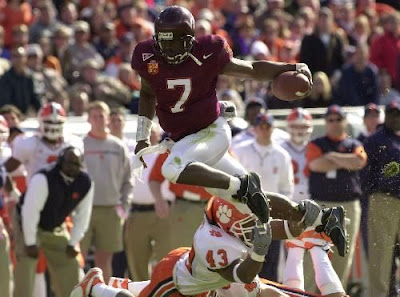 For a little while Vick put the Hokie offense on another level. A master of improvisation Vick would turn on the jets and make defenders look silly as he darted up the field. I freely admit that I really enjoyed watching Vick play college football. He was a freakish athlete and in my opinion was the catalyst that put VT on the national map. 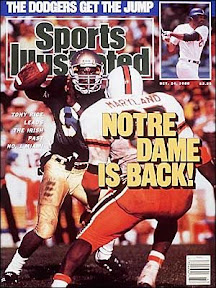 Rice was awesome both on and off the field. He chose Notre Dame despite having to sit out his freshman year in 86’ to get his academics squared away. In 87’ he took over as the starter and the Irish went 8-4. As a Junior in 88’ Rice exploded and was named the Fiesta Bowl MVP when the Irish defeated West Virginia for their last national title. Rice and the rest of the Irish ground attack would suck defenses in then all of a sudden he would pull up and throw a deep strike to The Rocket for six. Awesome. He also rocked the half cage face mask like no other. 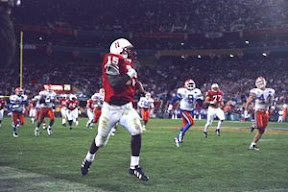 Frazier never put up Nintendo numbers but he could run the option in his sleep. More importantly he was one of the fiercest competitors I have ever watched. Frazier was just flat out going to beat you. In his career Touchdown Tommie went 33-3 as a starter, and played in three consecutive national title games winning two of them. In his last three seasons the only game he lost was the 93’ Orange Bowl against FSU for the title. Had he not missed several games as a junior due to blood clots his win/ loss record would be even more sick. The fact that he did not win the Heisman in 95' was a true hose job. That run against Florida in the 95’ title game where he ran through like 10 tackles was ridiculous. I never thought I would see another QB that dominant until Vince came along. 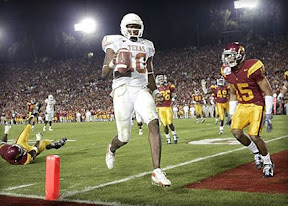 Vince did things that actually awed me. I was a fan from the start but after his performance against Michigan in the 2004 Rose Bowl I was sold. He had a few runs in that game that were unreal. His follow up in 2005 was nothing short of spectacular either. That Rose Bowl against USC was one I will be telling my grandchildren about. He was big, fast, elusive and graceful. When Vince dusted defenders it looked effortless. He also had a knack for never really letting anyone get a good lick in on him which is amazing considering how big he is. The fact that he didn’t win the Heisman in 2005 was another hose job. Young is the only QB to pass for 3,000 and run for 1,000 in a season.