I already gave you the background on where I am coming from with this science project when I discussed the Conferences in Part I. Now I will take a look at the three groups of teams that I previously identified in my 2010 Talent Analysis series of posts in relation to how they fared in the 2010 NFL Draft.

I have classified these three groups of teams as having elite talent, great talent and good talent. We will also look at a few teams that over-achieved in the 2010 NFL draft based on their general talent level.

These 8 programs are currently the cream of the crop and have what I call elite talent. Heading into 2010 the rivals rankings of their last five recruiting classes average out to less than 10. Not only do they dominate the recruiting rankings they have also recently dominated the BCS Championship. They own the last 7 BCS Championships and 12 of the last 14 BCS Championship appearances. Ohio State owns the other two and they are near the top of the next group.

Interestingly this group of teams also dominated the 2010 NFL draft with 48 players selected from these 8 teams. With 255 total players drafted these 8 teams owned 18.8% of all the players chosen. That is a staggering number considering there are 112 other Division I (FBS) teams and a horde of smaller schools with players in the mix as well. The results this group of teams have on the field and in the draft are the reason recruiting services make money. 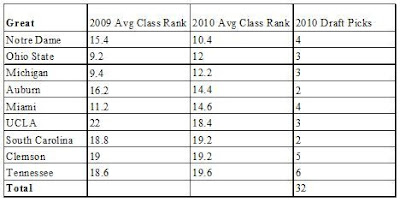 These next 9 programs are the second tier and have what I call great talent. They are heading into 2010 with average recruiting rankings between 10 and 20. Their showing in the draft is respectable but clearly drops off from the first group. Their total of 32 players drafted represent 12.5% of all players chosen. Still an impressive showing for only 9 teams. 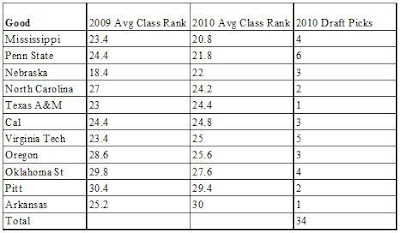 Then there is the good group. While their 34 picks represent 13.3% of all players chosen they pulled it off with 11 teams. In reality that makes the difference between the Good and Great groups pretty much negligible. Still a strong showing.

In total the 28 teams that make up these three groups produced 114 of 255 draft picks at an impressive 44.7% of all players drafted. As far as I’m concerned that number speaks for itself. I also think it puts an exclamation point the basic conclusion I came to when I set about to answer my own question two years ago. Do all these recruiting rankings really mean anything? I think the answer is a resounding yes!

I'll stick to my overall theory that success in college football falls back on three things: talent, coaching and program health. Recruiting great talent increases your chances of success by a factor of ten. Throw in a dash of good coaching and keep the program healthy with overall buy in from the players and you are in business. 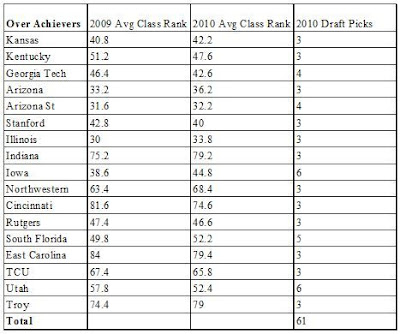 Just for kicks I also compiled a list of all the teams that are not part of the three primary groups but had 3 or more players taken in the draft. I consider them to be over-achievers. Interestingly quite a few of them are over-achievers on the field as well.

Utah with 6 picks is impressive and I was also a little surprised at Iowa. But South Florida really caught me off guard. Five picks? Really? Georgia Tech and Cincy have been over-achieving across the board the last couple of years. Let’s hope Kelly remembered to put some of that action in his packup when he headed to South Bend.

Enjoy perusing the numbers and let me know what you think.