In the time that has passed since the NFL Draft I have been sitting here plugging numbers into spreadsheets and trying to extrapolate some usable information out of it all.

I would have liked to get this on the street sooner but the spare time took a hit this week as I was otherwise occupied securing what will soon be OFD Headquarters back on the West Coast. I am already penciling in some transient FanTake houseguests for the Holiday Bowl. I figure with all the Big 12 representation here on the network I should at least have somebody cool to tailgate with. I will be looking forward to that. So back to this attempt at mining some college football data of the 2010 NFL Draft.

I won’t be taking the time to comment on individual draft picks. Scipio Tex already did a masterful job of that over on Barking Carnival. Links to his handiwork are below, as is a link to the full 2010 NFL draft tracker for anyone that desires to go back and look for more specific data after sorting through this.

For those of you that are familiar with my work this is loosely related to the "Talent Analysis" series of posts that I have done in the month following signing day the last couple of years. The data that I use for those posts is very straightforward. I take the rivals class rankings for the last five years and average them out by team and by conference. The lower the number the better. I have played around with weighting the recruiting classes, trying to account for attrition, etc. and found that it just doesn’t make much of a difference in how it shakes out.

Hence, I do it my way, spend a lot less time putting it together and feel like I still get a pretty accurate read on the big picture of who has what under the hood. If you are up for killing your entire Monday morning at work you might enjoy that full series of posts.

If not just hang with me for a second.

For the NFL Draft I did something along the same lines. I simply plugged in the number of draft picks by round for every team and totaled them by team and by conference. The full spreadsheet can be found at the link below. I did the same thing last year then sort of sat there and stared at is sideways trying to figure out what it was telling me. About a month later I decided what I really needed to do was compare it to my Talent Analysis data and look for similarities and differences. This post will do that exact thing from a big picture conference viewpoint. 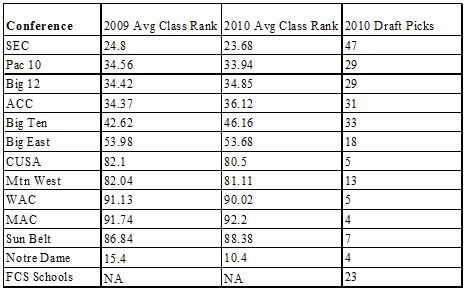 I created the above spreadsheet that simply takes the big conference data points from three different spreadsheets and puts them all in one place. The average class rankings by conference represent the average ranking of the signing classes for every team in that conference over the last five years. The numbers are straight off of the 2009 Talent Analysis spreadsheet and the 2010 Talent Analysis Spreadsheet. For the purposes of this table I listed both 2009 and 2010 for two reasons. First the players drafted this year were still being considered in the 2009 numbers and have since been replaced by incoming freshmen in the 2010 numbers. Second I think it is interesting how little those numbers tend to change from year to year. The total number of draft picks selected from each conference last weekend is on the right. Those numbers came from the full 2010 NFL Draft spreadsheet.

So what does it say? If you stare at this pile of spreadsheets long enough they will start talking to you like the dog that talked to Son of Sam. My biggest takeaway is that the number of players drafted pretty much falls in line with the conference Talent Analysis rankings. When I have done the Talent Analysis posts the last couple of years the conferences shake out the way you would most likely expect them to. The SEC is the clear front runner, with a drop off to the Big 12, Pac 10 and ACC who are all very close to one another. There is then a significant drop off to the Big Ten and an even more significant drop off to the Big East. The rest of the conferences all fall out way behind yet pretty close to one another in the 80-90 range.

Then when we jog over to the 2010 draft pick column on the right those numbers follow a very similar pattern with two exceptions. The Big Ten is right there with the Big 12, Pac 10 and ACC. In fact the Big Ten edged all three. Then the numbers in the smaller conferences are all hovering around 5 with the exception of the Mountain West which had 13 players drafted last weekend. By the way 47 picks from the SEC is amazing. The Big 12 got off to a hot start but the SEC won the race.

So what's up with the Big Ten and the Mountain West? Is the Big Ten getting the shaft in all of the recruiting rankings? I don’t think so. Without taking the time to do a more extensive breakdown of what conferences dominated what position groups being drafted I would say that the Big Ten puts a lot more offensive linemen and front seven types into the league than they do skill players. Those position groups don't generally get quite the same level of recruiting hype that their skill playing counterparts do. Now that I opened that can of worms I will also point out that the Big Ten had a nice kick save of 9 picks in the 7th round.

The Mountain West anomaly is directly related to Utah who had six players drafted and TCU chipped in with another three. The fact that those two teams pulled that off should be of no surprise to anybody at this point. I could pull another several nuggets out of the overall conference numbers but for the time being I will stop there to give everybody time to peruse the sheets and come up with your own conclusions. I thought about weighting the overall draft picks by round but felt like team needs vs. best player available would potentially taint those numbers. One more discussion point I suppose. I realize fully that this is all nerdery of the highest order but I have always found it interesting to compile the numbers then look at them this way. It paints a slightly different picture for me when I can see it all in one place. Hopefully I didn't just make your head hurt. I am looking forward to seeing everyone’s comments.

In the next installment I will dig into the teams themselves. I will look at them in the same programs that I use for the Talent Analysis series. Teams with what I define as having elite talent, great talent, and good talent. I will also take a look at the over-achievers. It should be no surprise that like the conferences the individual team drafts tend to look a lot like their overall talent numbers too. More to follow.