Is spring football really over? It seems like just yesterday the 2009 season was kicking off. After a quick start there was a bump, a series of scares then a November that I have attempted to chemically erase from my memory on more than one occasion.

Weis was fired, Kelly was hired, we watched what seemed like every other FBS program play a bowl game then had a small respite to dissect every word Coach Kelly uttered before spring football. With all of that in our rear view mirror I suppose we’ll have to fill the next four months with wild speculation, irrational predictions and whatever else we can dream up to pass the time. Before we officially start that phase we have a few final matters to discuss.

Welcome to another edition of the Irish Blogger Gathering. This round of questioning has been put forth by the fiery band of Domers better known as Her Loyal Sons. In any given week the gents at HLS are likely to keep you informed of all matters pertaining to Notre Dame, slight the hated Wolverines, call out Urban Meyer, and emit a relentless torrent of Tweets with a variation in subject matter the likes of which might make a lesser man's head explode. Every time I’m in downtown D.C. I half expect to see domer_mq fleeing the scene after an obligatory cold cocking of some random chooch in a Michigan sweatshirt that made the mistake of slurring "Grbac rules" while trying to score change for a couple of loosies and a half smoke. I suppose I should get to the business of answering the questions.

1) Given the stat-lines of Brian Kelly’s first Blue and Gold Sprint Spring Game, it seems obvious to me that the media will be shark-feeding from now until the first game of the 2010 season over our new-found "quarterback controversy." I mean, didjya see MONTANA SON of MONTANA throw those TD PASSES!? HE LOOKED JUST LIKE MONTANA! So let’s all do the responsible thing as "Notre Dame Blogs: Protectors of the Realm" and come to full agreeance about this so-called controversy and put it to rest right now: Nate Montana should be the starter, right?

After watching the Blue-Gold Game I think Montana has definitely emerged as the incumbent QB2 heading into the fall and he looks like he could very well be a serviceable backup. That is a good thing for many reasons. That said there is no way he will supplant Dayne Crist as the starter. He needs to be ready to go for obvious reasons but as long as Crist is healthy Nate won’t likely be delivering the Irish Faithful another Chicken Soup Bowl in 2010.

2) One of the over-arching themes of the 2010 Spring session of Notre Dame football was that Brian Kelly has been spending a lot of time trying to change the overall attitude of the Notre Dame team. To quote Kelly, "What I want them talking about is, ‘It’s me that gets that first national championship,’ not ‘I want to be the No. 1 draft pick.’ That’s what we’re reshaping." Do you think that unexpectedly long wait-time this weekend for Golden Tate and Jimmy Clausen to receive that magical phone call from some NFL team will go noticed by any of the Irish footballers who, until this weekend, weren’t getting the message from Kelly? Was there anything this spring that you noticed that made you think that most of the team was already on board the Good Ship Greater Good and that the transformation in that regard was complete?

I wrote a relatively detailed post on this subject a few weeks ago. The short version is that I really like Coach Kelly’s approach and as far as I can tell it appears to be working. We won’t know for certain whether or not it has really taken until we see how things unfold next season. The next step from there will be to see how it plays out over time. I really think the mental aspect of his approach looks very similar to Marine Corps Recruit Training. That’s an organization that has been pretty successful in training young men to function as a cohesive unit for the last 234 years. Why not mimic it? Here is the LINK to the long version for those that might be interested. As far as Clausen and Tate go I don’t think that will have much if any impact.

3) A fair number of players made a pretty good splash in Spring Ball and in the Blue & Gold Game. Name one you didn’t notice belly flopping into the big pool of opportunity and explain why that disappoints you. Or, if you really want to be creative, explain why you’re glad that particular player didn’t win any belly flop competitions.

Harrison Smith. Sort of… Coach Kelly mentioned Harrison in the early going as a guy that was buying in and bringing it during conditioning etc. Then things went pretty much silent on the net in regards to all the safeties. The Blue-Gold game didn’t show much due to the vanilla defense so the question remains unanswered. The safeties are my primary concern on defense and I’m rooting hard for Harrison to bounce back after last year. Some indication that is going to happen would have been nice heading into the off season but it will have to wait until September.

4) Pick one quotation from Spring Ball sourced by an Irish coach and parse the living hell out of it.

That pretty much sums it up. Coach Kelly has drawn a clear line in the sand with the players. It’s not about you. This really ties back into #2 but I really think this is the crux of the whole thing for Coach Kelly. He has chosen this course of action and now he owns it. His ultimate success or failure could very well hinge on this. It will either be the thing that makes him famous or gets him eternally blasted on the message boards.

5) Select one stat from the 2009 season that either troubled you greatly or made you brag to all your coworkers who cheered for teams with sucky comparable stats, and explain why that particular stat will be vastly improved or ruined in 2010 based on what you’ve seen in the spring.

Both of those stats were/ are nothing short of a complete and total soul crusher. I really think this is going to improve significantly in 2010. Perhaps I have let LB Coach sway me too far in a positive direction but I don’t think so. The starting front seven is pretty salty and it looks like some quality depth might be in play there as well. The corners should also be primed to bounce back. The degree to which this whole unit gets better could very well end up being safety dependent.

6) Bonus: Stick figures, collage, stolen work, hotlinked photo, professionally edited photoshopping, whatever… give us a visual that best represents everything you’ve seen from spring college football, Irish and/or otherwise, in 2010. 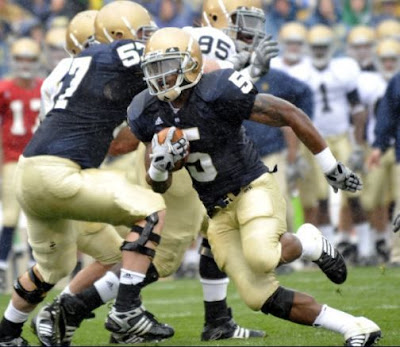 I was pleasantly surprised by the rushing attack in the spring game. If it continues to come together it could take a ton of early heat off of Crist and allow him to come into his own with a little less riding on him. I see the rushing attack as the X factor in September.