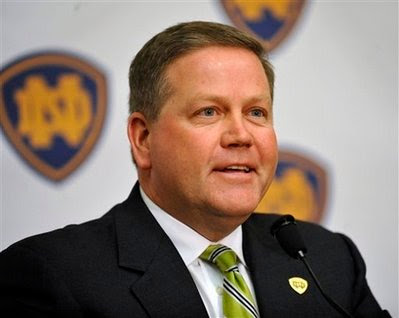 The 2010 National Talent analysis comes to an end in South Bend where I will take a little more in depth look at how all this talent business applies to Brian Kelly and the Fighting Irish.

In the final installment of this series last year I rambled on way too long about the evolution of the Notre Dame roster over the last several years. If you want to read that full post for background you can find it HERE. If not here is the Cliffs Notes version. Weis started his tenure with a freshman and sophomore class that were short on both numbers and talent. There were a handful of great kids in there but as overall classes they were not at all on the level you would expect at Notre Dame or any other top program. Those two classes largely flew under the radar as Weis rode Brady Quinn and company to back to back BCS berths in 2005 and 2006, but in 2007 when they were juniors and seniors the wheels came off. 2008 was slightly better and 2009 was expected to be much better as those two classes had worked their way through the system giving way to some good young talent. Weis had proven to be a pretty solid recruiter and did a solid job of restocking the roster with numbers and talent behind those two classes. The storm had passed and things were looking up again for the Irish heading into 2009. Since we all know how that story ends I’ll jump right to the part where Brian Kelly walks in the door.

I said in an earlier installment of this series that the Weis number I am the most thankful for is 10.4. That is the average ND class ranking over the last 5 years and only the 8 Elite programs that I talked about in Part III have done better. I fully realize that the rivals class rankings that I used to make the SPREADSHEET aren’t a perfect way to come to this conclusion but I believe they get you very close. I have seen some more detailed analysis from the genius data cruncher known as FunkDoctorSpock on the ISD message board that literally averages out star rankings etc. but at the end of the day it all ends with the same basic conclusion. Notre Dame has a raw talent base that is up there amongst the best in the country. The next obvious question becomes what exactly is Brian Kelly going to do with it? I haven’t commented much on the Brian Kelly tenure to this point so I figured now would be as good of a time as any.

I’ll start by stating the obvious truth. We won’t really know how well the Kelly tenure is going to go until we see it on the field. We should have a pretty good idea a year from now and three years from now we’ll either be hoping he coaches at ND until he keels over or trying to run him out of town. In the mean time we just have to focus on what we do know and allow that to factor into our individual levels of optimism. So what do we know?

Kelly is a real leader. Leadership is something that is not necessarily easy to define but many have tried. There have been thousands upon thousands of books written on the subject. There are leadership seminars, leadership training, leadership this and leadership that. The list goes on and on and on and on. My personal philosophy on leadership is this. You know it when you see it. Some people are good at it and some people just aren't. I don’t believe people are exactly born leaders per say, but I do think everyone has a certain capacity for leadership. Whether or not they ever reach their individual capacity is based on a combination of their environment and a personal desire to get there. Kelly appears to have reached his capacity and to this point it sounds like the players are jumping on board.

We know Kelly has a proven track record of being a winner. Not only has he won but he has also maximized the talent he had on hand in order to pull it off. Cincinnati made an appearance in my overachievers category in Part VI and Brian Kelly owned the Big East for two years with that talent level. He had the least talented team in the conference and still won. While Kelly maximized his talent and overachieved at Cincy he likely wasn’t ever going to be a real title contender there. You can overachieve to a point but it is extremely difficult to beat the teams with Elite talent when your talent level isn’t even close. It is akin to taking a knife to a gunfight. You always have a chance but the odds are definitely against you. All that said he did about as well as he could with the players he had to work with. Now he has a significant upgrade at his disposal as the talent jump from Cincy to ND is significant. He got the most out of a Cessna can he do the same with a jet?

Kelly has talked a lot about developing his talent to get the most out of them and the best summary I have seen of his theory was put together by the wise one OC Domer at the end of January. In short his goal is to get his players to perform at a level that he calls "unconscious competence" where they don’t have to think about it anymore. They just get out there and play. I’ll talk more about this theory another day but in short I buy into it. You can train just about anybody to do anything with an initial focus on mastering the basics then systematically building on it.

So now that we have established that Kelly is a leader with a track record of maximizing his talent how do the X’s and O’s translate? Is this going to be as painful as watching Dick Rod trying to implement his system at Michigan? I don’t think so. Dayne Crist is more than capable of running Kelly’s offense and in my opinion he has the potential to be better than any QB Kelly had at Cincy even with a bad wheel. Crist will flourish in this offense and if he gets banged up Kelly will plug a youngster in there that he has coached up to at least be serviceable. He also has a track record for doing that. As for the playmakers Mardy Gilyard was a stud in Kelly’s offense at Cincy and in my opinion the Irish have a handful of kids on the roster that might be just as good if not better than Gilyard by the time its all said and done. I expect that the aggregate combination of Michael Floyd, Deion Walker, Shaq Evans, John Goodman, Armando Allen, Theo Riddick and a couple of the inbound freshmen will wreak some serious havoc in Kelly’s offense. The only wild card I see in the immediate future are the Offensive Tackles. If they are at least serviceable points shouldn’t be an issue.

On the defensive side of the ball there will be a few growing pains moving back to a 3-4 scheme but in reality the upper class kids on the defense were recruited to play in Corwin Brown’s 3-4 anyway. I had a long discussion with my Dad a couple of weeks ago about 4-3 vs. 3-4 and he told me he had recently had the same discussion with one of his former high school players that went on to play in the NFL. Their collective conclusion was that at the end of the day that how you line up matters much less than simply getting to the football and hitting people in the mouth. I tend to agree, and once that unconscious competence thing starts to kick in that’s exactly what should result.

So does Brian Kelly + Great Talent = multiple BCS Championships? Like I said in the beginning, it is impossible to know for sure but after mulling this over for the last few months my personal level of optimism is pretty high. He could still turn out to be the next bust that couldn’t make the jump to the big time, but I think that is highly unlikely. Being the Head Football Coach at Notre Dame is Kelly’s dream job and he’s been preparing himself for this opportunity his entire career. He should be able to win some games this fall and get that positive buzz cranked back up in earnest. To a degree he already has, they even talk about him favorably on ESPN. Once that positive buzz gets cranked up the recruiting will fall in right on cue and Kelly will have the program back on track with some momentum behind it. While the roster has a couple of question marks at specific positions there are no major gaps in numbers or talent like the one that Weis had to work through. That should give Kelly what he needs to avoid any major catastrophes like 2007 as he gets rolling into his tenure. I think Brian Kelly succeeding at Notre Dame is not only doable but dare I say likely.

One quick admin note for the regulars. The tiny sliver of the internet known as "One Foot Down" will be relocating very soon. I don't anticipate any interruption in service you will just stop by one day and the site will look a little different. After an extended contract negotiation with Sailor Ripley I have agreed to join Barking Carnival, The Tortilla Retort and several other great blogs on the rapidly expanding FanTake network. So for all of you regulars nothing will change content wise there will likely just be more people joining our discussions. I still plan to keep my usual 60/40 ish split with the 60 on Notre Dame football and the 40 on everyone else. Or as Subway Domer once described it "a college football blog with a nice Notre Dame lean." On that note thanks again for stopping by. Your continued support of OFD over the last year has been instrumental in this opportunity and that is much appreciated.