The week in news- Signing Day, Eats and the Coaching Ripple

Share All sharing options for: The week in news- Signing Day, Eats and the Coaching Ripple 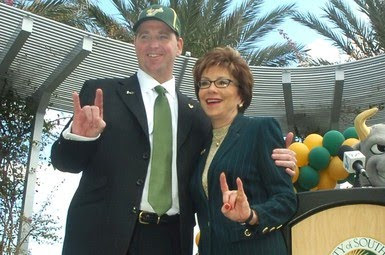 This dead period between the end of the season and signing day is seriously lame but I try and make it a bit of a break. There are the final coaching moves to track but other than that there isn't much of anything else to follow on the college football landscape other than the pending decisions of high school seniors. The last few weeks of the recruiting cycle can really make you mental if you let it. I keep an eye on it but I always fight the urge to get too riled up about any individual player until they sign. Until then there isn't really any telling what might happen. So instead of constantly hawking the message boards for the latest commits I will continue to try and maintain my postseason/ post holiday routine of increased workouts and enjoying the finer things in life like watching my 2 year old son suck down a fistful of oranges Kobayashi style. That little dude might have a future. He's serious. With that here is what I found interesting this week on the college football landscape.

Notre Dame is conducting a trial run on a football training table. For the non-ND fans that stop by here you probably think that's a misprint but it isn't. Needless to say it is about time. The average ND defender lost 13lbs over the course of the 2009 season. Not good.

In another positive development of a completely different fashion BC linebacker Mark Herzlich returned to action this week. I was happy to see that, he's a tough kid and a class act.

I do a pretty decent job of following all the news around college football and modern technology helps me out with that quite a bit. With my iPhone and Twitter I'm able to keep track of pretty much everything throughout the course of the day. I also read everything that the ND bloggers in my right side bar write and try to read most of what the other bloggers in my right side bar write as well. What the hell does that have to do with anything? This. One of the most interesting things I read this week was a back and forth between the Big Red Network and the Tortilla Retort comparing the past decade of football at Nebraska and Texas Tech. I found it interesting as I keep a pretty close eye on the Big 12. At the end of the day Texas Tech's best decade came out just about even with one of Nebraska's worst. So what does that say? For the handful of Nebraska and Texas Tech fans that stop by here I would be interested to hear what you think in the comments section.

Speaking of Texas Tech remember Graham Harrell? The dude that threw the miracle TD pass to Michael Crabtree to beat Texas in 2008 and followed it up in the post game interview with "weeee caaaaalllll thaaaat pllaaaaayyyy ssseeeeeexxxxx" is apparently back from Canada or wherever he disappeared to for the last year after being cut by the Cleveland Browns. Now he's on the Okie State Coaching staff. Good for him.

Now for the big coaching carousel. Hang with me here....

So Lane Kiffin bolted Tennessee for USC and has since been bashed on by everybody in the free world, myself included. People in Knoxville are so pissed that all kinds of hate is being thrown his way this week. Reports surfaced that he crashed his complimentary Lexus last summer, The Wiz compiled a nice collection of anti-Kiffin photos and to top it off a Knoxville Lawyer is know trying to name their Sewage Treatment plant the "Lane Kiffin Sewage Center." That's quite a week.

Replacing Lane wasn't easy for the Vols but they settled on Louisiana Tech Coach Derek Dooley. He's the son of Georgia legend Vince Dooley but still not quite at a point in his career that you would think he'd get a head job in Tennessee. According to Sports by Brooks a large part of the reason for the hire is the fact that he agreed to keep the remainder of Kiffin's pricey assistants on the payroll through the remainder of their contracts. The move saves Tennessee a cool $2.8 million. Interesting.

To replace Dooley Louisiana Tech hired Arizona OC Sonny Dykes who is a guy that I thought had a decent shot at the Texas Tech job. Mike Stoops has now lost both his OC and DC this off season. I wonder if Tenuta will turn up out there? Someone has to hire that guy right?

Elsewhere Skip Holtz jumped from ECU into the Big East by landing the South Florida job. This is a nice step up for Skip who is still a borderline flyer. As a side note what's up with Skip throwing up the Hook em' Horns? I didn't realize the Bulls had stolen that.

Completing the circle by be
ing named Skip's successor at ECU is none other than Ruffin McNeil. After filling in for Mike Leach after he was fired at Texas Tech McNeill interviewed for the Tech head job that ultimately went to Tommy Tuberville. I would expect that all the former Leach assistants that Tubs cut loose in Lubbock will also follow Ruff to ECU.