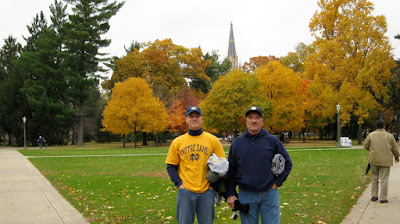 What a crazy week. I'm sitting here in the home stretch of trying to finish up my master's thesis and instead of a nice dead week the whole country went haywire on the coaching front. So at 2:00am on Saturday morning I'm catching up. A special thanks goes out this week to the guy my kids call "Coach" and I call Dad. If it wasn't for that guy I probably wouldn't have this college football habit that leads me to do things like post at 2am. Here it goes.

Starting with the Hub City of Lubbock, Texas. So we all know the Dread Pirate Mike Leach is gone. Well documented right? This week the Pirate dropped a full blown lawsuit on Tech and there are some pretty interesting claims in it. The WWL has a summary here, and for those of you with a tremendous amount of spare time here is a link to the full blown 55 page PDF. In short it all makes Craig James sound like the biggest uber tool in the history of helicopter Dads and Chancellor Kent Hance sound like a pretty shady character himself. Good times. All that said I still think that Texas Tech may have actually just bumbled their way into a really good situation here minus the few million bucks they will likely end up paying Leach before all is said and done. Tommy Tuberville is a Tier 1 coach and the fact that he even wanted the job is a testament to what Leach did there. Before Leach the only time Texas Tech was on National TV was when they were playing a "buy game" against Ohio State or Florida State (went deep there) and they were the team that got bought. That is now ancient history. I can't count the number of times in the Leach era I said "man what if Texas Tech had a defense?" Well with Tubs in town they'll likely have one in relatively short order. Tubs had his opening presser this week and also started assembling his own staff. He is keeping the offensive philosophy and bringing in Troy OC Neal Brown to run the offense and Alabama linebackers coach James Willis to run the defense. I'm partial to the Big XII and Tech just became one of the more intriguing teams in the league heading into the 2010 season. With Tubs at the helm they might become a serious factor.
In Knoxville Lane Kiffin up and bolted for USC creating a firestorm the likes of which are akin to nothing I can remember. Scroll down a post for my full two cents but for me personally I'm all about it. I think Kiffin at the controls in the Coliseum will make for a never ending story and not the one with that Etrayou kid and his horse Artax. I also happen to be a Notre Dame fan so my least favorite coach heading up my favorite program to root against is perfect. Bring it Lane and take it to full on 80's "U" type ridiculousness too so that I can really really enjoy the inevitable train wreck that is in the mail for the Trojans. Brian Kelly you sir, have one job and you know what it is. Beat SC!!!!!! Oh yeah and Tennessee hired Derek Dooley to replace Boy Kiffin. Dooley is a small school sleeper that may or may not turn into a monster. Don't sweat it Vol nation it is better than the inevitable probation Kiffin was driving you towards.
Al Groh didn't waste any time getting a new job after finally being chased out of Charlottesville. Paul Johnson snatched Groh up to be the DC at Georgia Tech. Say what you will about Groh as a head man but the guy knows the 3-4 defense like Texas fans know how to tailgate. The dude is serious and coupled with Johnson's offense the Wreck may have just turned into a legitimate contender. Just saying...
In honor of all the coaching swaps LSU Freek put together a great montage that is a must watch for any college football fan. The guy has skills. Real skills.
Now to South Bend! For starters AD Jack Swarbrick gave an interview to the South Bend Tribune this week that addresses several items of interest to ND fans, particularly his two cents on scheduling. This is a hot topic with ND fans, myself included, and hearing it straight from the man was sobering. In short don't expect to play any "marquee" teams other than Michigan and USC any time soon. This could situation could boil over, especially if Coach Kelly is successful on the field in the next couple of years. It will be interesting to see how it all plays out.
All world receiver Michael Floyd also got into some good old fashioned fisticuffs just prior to coming back to school last weekend. OC Domer has a good take on it. All ND fans must now stand by for Res Life to do their thing. All I'll say is that if #3 gets hammered it won't be good in any capacity.
Camp Kelly is in full swing and the reports of locker diagrams that must be complied with and kids throwing up are flowing. I'm all about it. In addition Coach Kelly announced the rest of his new staff this week. Individual profiles are below and video interviews with all the coaches can be found at und.com.
Kerry Cooks- Outside Linebackers
Ed Warriner- Offensive Line
Tim Hinton- Running Backs