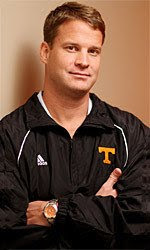 Here I was actually thinking that USC might actually go down in flames and rob me of my favorite team to root against. So much for that. It would appear that after one whole season at Tennessee Lane Kiffin is the new Head Coach at USC. Sucks to be Tennessee. Kiffin spent the last year getting Vol nation all riled up by calling out Urban Meyer, collecting an impressive smattering of NCAA rules violations and blessing his poor kid with the middle name Knox. Now he's dumping them for the Trojans. Perfect. Send him right back to Troy, that's exactly what USC needs with the NCAA bearing down on them. Good call.

HLS had a great post about what Carroll leaving USC means for Notre Dame fans that was right on the money, but I think young Kiffin may have just saved the day. I for one can absolutely root against a Kiffin led Trojan squad with the same level of disdain that I harbored for the Sneaky Pete version. Depending on the severity of the looming NCAA decision Kiffin is actually capable of maintaining the talent level, on field performance and over the top swagger that his predecessor did. And to top it off he might actually be an even shadier character than Carroll was. You know I really might have been wrong in my post yesterday. With Kiffin at the controls the Trojans just might rise to a level of jackassery that surpasses that of "The U" in their heyday. I'm sure Kiffin will start providing Brian Kelly with bulletin board material in short order. College football is more interesting with a handful of guys bad guys wearing black hats and at USC Kiffin is now poised to become their poster boy.