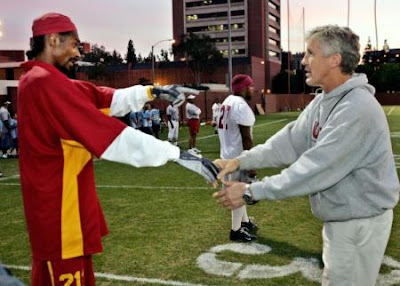 I started watching college football pretty avidly in the early 80's and in the twenty some odd years I have been watching then there has always been at least one team I just really didn't like. A team that epitomized everything you want to root against. For me the baton got passed from Oklahoma to Miami to Florida State with a bit of overlap in there every now and then. All of those programs were similar during those runs. They won a lot of games, exuded over the top swagger, had a slew of off field issues and were chock full of shady characters. The Boz, Randall Hill, Prime Time they were all easy to root against. Those teams were also led by highly effective coaches of questionable character. Barry Switzer, Jimmy Johnson and to a lesser degree old man Bowden who didn't necessarily promote the attitude but he sure didn't stop it either. Pete Carroll picked up at USC right where these guys left off. Carroll turned USC into one of college football's greatest antagonists. If college football had good guys and bad guys wearing white hats and black hats Carroll was definitely a black hat guy. I don't care how many gangsters or special needs kids he hung out with in his spare time. It was generally futile but I definitely enjoyed rooting against them during Carroll's tenure.

Now that Carroll is officially out it looks like I might need to start shopping for a new favorite team to root against in the not too distant future. Carroll is getting out the door amidst much speculation that the NCAA is on the brink of finally catching up to the Trojans. Despite his success at USC he won't be leaving with a rousing sendoff, instead he appears to be running out of a burning house that he personally set on fire. Carroll of course denies that the NCAA investigation has anything to do with his decision to leave saying "There was never going to be a good time." Good for who? Interestingly enough even the WWL is bagging on Carroll a little bit. It is crazy how fast they will turn on you in Bristol!

Regardless what becomes of the NCAA investigation Carroll's timing leaves the Trojans in a pinch. National Signing Day is 23 days away and the Trojans are starting up a coaching search. With potential NCAA sanctions looming USC might not exactly be a destination job at the moment and their current recruiting class is already showing signs of jumping ship. With talented juniors Everson Griffen, Damian Williams and Joe McKnight already declaring for the NFL draft one has to wonder how much of the talent on the current roster is excited about sticking around. Heritage Hall may be on the brink of one of the most spectacular falls from grace that we have seen in quite some time. Barring a miracle hire and a complete whiff by the NCAA it definitely looks like the party might be winding down. Barring a rash of transfers they still have enough talent on the roster to squeeze out another couple of good seasons but whatever happens with the coaching search and current recruiting class will be very telling. It was a hell of a run though.

When I look back on the Carroll tenure some day I definitely won't forget how annoying it was watching them drop the hammer on just about everyone year after year, especially Notre Dame, while dancing around, laughing, throwing the bird to spectators and dry humping sideline reporters. There probably won't ever be another team quite like Miami in the 80's but Carroll's Trojans in the 2000's damn sure gave them a run for their money. Perhaps 10 years from now ESPN will feature "Wild Boyz- The rise and fall of USC in the 2000's" in their 40 for 40 documentary series. I bet Snoop Dogg would do the intro music track for it.