Is It Over Yet?

Share All sharing options for: Is It Over Yet? 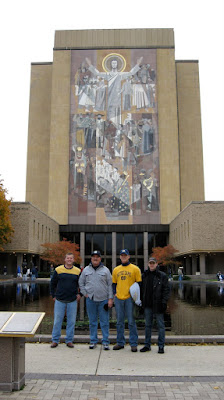 Okay I’m back out from under the rock. Sorry about the short break in posts, I just needed to take an actual vacation of sorts. After a few weeks of not thinking too much about real life, cavorting with the kids in the snow and watching every single bowl game it is back to reality. With that reality comes the realization that the 2009 college football season will officially end in Pasadena on Thursday night. I’m looking forward to watching the Alabama and Texas defenses square off to finish off the season. As a Notre Dame fan I will be quite ready to kick off 2010 as soon as that game ends but before I start rambling down that road I figured I should at least spend a few minutes getting myself back up to speed.

How about those bowl games? I’ll start by saying that I really enjoy bowl season. It is one of my favorite times of the year, rivaled only by opening weekend in early September. If I’m in the country I am generally able to take time off to spend time with the family, eat my weight in bad food, pound beers and watch college football almost daily for about three weeks. I even have my kids half hooked on it at this point which makes it even more fun. But this bowl season was really strange. There seemed to be a larger than normal rash of teams that just didn’t show up ready to play. By my count there appear to have been about 16 teams that must have been busy doing things other than preparing for a game. I know the factors are many but a few of those performances were true head scratchers. This was one of those bowl seasons where the office secretary that you let enter your pool just for an extra ten spot probably claimed the prize after picking based on uniform color. It was crazy! I started working up a post rehashing all the bowl games like I generally do every week for the regular season then scrapped it. What’s the point? The season is over. And in other places the 2010 season is beginning…

The 2009 Fighting Irish- Did they really figure out a way to lose six games? Having spent a little time in some of the world’s less desirable places I generally do a good job of keeping things like this in perspective. Life could always be worse and at some point chances are it will be again. That said this season was rough and I could do without another one like it for a long, long time. Things were still looking salvageable right up until Jimmy Clausen got KO’d and fumbled at the Navy one yard line. As soon as that happened in the back of my head I heard the kid from Christmas Story say "Oh Fuuuuuuuudggggeee" and had a sinking feeling that I had just witnessed the beginning of the end. Unfortunately I was right. HLS summed it up quite nicely a few days ago. I already said my piece on this topic so I’ll cut myself off now. I will say that I have since gone outside and screamed "why" to the heavens on more than one occasion only to have my neighbors yell at me to shut up before they call the cops. So far my pleas to the heavens have only resulted in a few nice quotes about RKG’s but more on that in a minute. It is what it is and it is time for the next chapter of Notre Dame Football. May it be much better than the last three.

I didn’t get too wrapped up in the Notre Dame coaching search and honestly just kind of figured all along that Brian Kelly would end up with the job. There are a few reasons I thought that none of which matter because like the 6-6 season it is what it is. I was waiting for the dust to settle on the new staff etc. before I posted my thoughts on the beginning of the Kelly Era when I saw this article by Lou Somogyi at BlueandGold.com that just really just nailed it. Chances are that if you are an ND fan you have probably already read said article but if you haven’t I highly recommend it. He very astutely sums up the current state of affairs from RKG's to expectations.

One Foot Down is about to turn one! Now what? I’m not sure yet to be honest. I have been giving that a lot of thought and have yet to come up with a concrete answer. I started this little spare time hobby a year ago for a handful of reasons and 179 posts later here we are. My original intent was to talk about all things college football which would obviously include plenty about the goings on in South Bend. Hence the header which makes sense to me and probably confuses the hell out of everyone else! I think Subway Domer described it best when he told me he thinks of it as a "College football blog with a nice Notre Dame lean." The truth of the matter is that in year one I found that I just don’t quite have the time to write posts on everything that I want to. That being the case I tend to prioritize and write about what I’m most interested in and that’s Notre Dame. A lot of other stuff falls off the table and I try to use my "Week in news" posts as a catch all for comments on those assorted items when I can. For the year I ended up with about a 50/50 mix (rough swag) with about half the posts on ND specifically and about half about everyone else. Going forward I am still mulling over a few options ranging from trying to jump to the next level to pulling a full on Keyser Soze. If and when I decide to make any changes I will be sure to let you know in advance. In the mean time you can expect that I will attempt to maintain the same pace and format. In the grand scheme of things OFD is still VERY small time but I do want to thank the few hundred of you that stop by here on a daily basis to see what’s going on. As always your readership, comments and emails are very much appreciated; I enjoy the discussion. On a final note a quick thanks to all the other bloggers that have exchanged links with me in the last year. A few in particular have been especially good to me in many ways and I’ll link them below. If you haven’t already check them out.

Subway Domer- The defacto ringleader of all ND Bloggers, Subway is all over everyt
hing related to ND Football. I especially enjoy participating in the weekly Irish Blogger Gathering that Subway honchos with the rest of the great ND bloggers linked in my right side bar.
OC Domer- The wise one. Great man, great blog.
Double Xtra Point- These Huskers do it up right.
Barking Carnival- These guys are the next big thing in the blogosphere. They cover Texas and are rapidly expanding to other teams. They have some serious skills over there.