The week in news- Urban, Pirate Sheds and "Resurrection"

Share All sharing options for: The week in news- Urban, Pirate Sheds and "Resurrection" 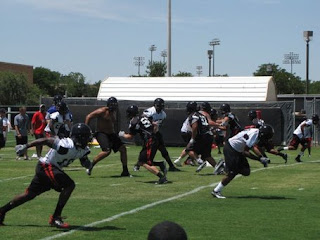 I have been laying low over the holidays watching bowl games, tracking the progress of Brian Kelly and most importantly relaxing a bit and spending some good time with the family. That said there are a couple of developments that have come up in the last few days I can't pass up commenting on. So I'm up for air briefly. How about those early bowl games by the way? Talk about an unusual start to bowl season. Anyway...

What's the deal with this Urban Meyer flip flop? I'm resigning....No wait, I'm just going to take a leave of absence. I have to say I kind of get it as I have a pseudo similar personality. I don't know how to do anything half speed despite how it may sometimes appear on this blog. I can see how going 90mph all the time could catch up with you so I respect the decision to walk away. That part I get. I don't get how he quickly reversed himself and decided that a leave of absence is really going to fix it. I just don't see that working in the long term or in the interim for that matter. Can he really turn it off to the point that he can get healthy while Addazio runs with it? I personally don't see how that is possible. We'll see how it plays out but I see this as ultimately turning into the next frenzy for the media to speculate on for the remainder of his tenure in Gainesville. Having just lived through three years of "Weis on the hotseat" media speculation I wish Gator fans luck with "How is Urban's health" media speculation going forward. It sucks when your program doesn't have a concrete future. Have fun with that day to day coach thing.

Having grown up in West Texas I keep a close eye on the Big 12 to include Texas Tech. The Coach had some interesting dealings with them when they recruited some of his players when I was a kid. The Texas Tech athletic department is the epicenter of the good old boy mentality. They ventured outside the wire for the first time when they hired Mike Leach and Bobby Knight. Handling the success and scrutiny that has come with it has been very challenging for the Tech athletic department at times. This is all new territory for them. I'm honestly surprised that Leach has lasted this long. He says what he thinks and does whatever the hell he wants to regardless of what they think about it and it drives them insane. Those good old boys move slow, talk slower and like to eat lunch at the local grocery store. Bobby Knight even threw his lunch at one of them at said grocery store back in 2004. It blew their minds. With Leach they like the W's but the pirate obsession and the host of quotable quotes they could do without. It doesn't mix well with Lubbock and never has. No one really knows the true story behind this Adam James allegation and perhaps we never will. What we do know is that Leach has a long standing history of dealing with player issues in unusual fashion. I don't remember any outcry when he made Edward Britton do his homework on the sidelines in 30 degree weather last spring. I doubt he sees this as any different. Based on this article it would appear that from the Leach perspective he just crossed paths with the wrong kid/ family. His reference to Adam James as a "slacker" and Craig James as a "little league dad" pretty much say it all to me. Leach doesn't think he did anything wrong and isn't about to backpedal on a decision just because the kid's Dad is Craig James. Texas Tech is in a pinch here and the smart money says they throw Leach all the way under the bus before all is said and done. They will slowly regress back to 5-7 records and quiet lunches at the grocery store with Michael Crabtree as a fading memory. I will watch how this develops very closely.

I have really followed the "read more post less" mantra this last week. With Brian Kelly taking over at ND I have been following his progress with recruiting and with hiring a staff very closely on the premium sites. There should be plenty of concrete info to write about in the coming days. In the mean time I finally had time to sit down and read Resurrection by Jim Dent. As a Notre Dame fan I will jump on the bandwagon and highly recommend it to any other Notre Dame fan that hasn't read it yet. I found it especially interesting to read as the program is in the initial stages of making the transition to Brian Kelly. Great story, great read.

Okay back to laying low and watching bowl games with the Deer Hunter. I'll continue to Tweet as we go for those that might be interested in the random thoughts that I have along the way. Happy New Year!