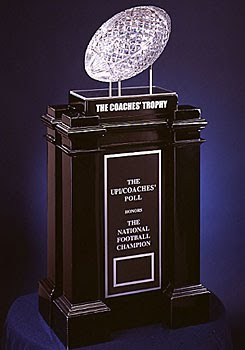 The bowl season is off to an inauspicious beginning. The real wildcard in picking bowl games is that there are always teams that just don’t show up. They just make the trip and go on vacation. Thus far one could argue that Fresno State, Central Florida and Southern Miss have all done that. That’s what makes picking the bowl games so challenging at times and also why things like your buddy’s wife who made her picks based on uniform color sometimes ends up winning your bowl pool. Such is life. In the final installment of the OFD Bowl Preview I’ll talk about the January games and how I think they will shake out. From here I will take a little break from posting and sit back to enjoy watching all the games. I will continue to comment on the games with Tweets as we go and wrap it all up on the back side. Best of luck with your to your teams and I hope you have some success in your respective bowl pools. Bragging rights can be a great motivation to get into a game that you otherwise might not even be compelled to watch. Have a safe and happy holiday season and thanks as always thanks for stopping by. The steady, albeit small readership has made the inaugural year of doing this blog really enjoyable.

Here we go with this Big Ten thing again. It is admirable that Pat Fitzgerald puts together a competitive Big Ten team, but I don’t think the Wildcats have the athletes to matchup with Auburn. That will be compounded by the Chzik/ Malzahn brain trust that will likely hit Northwestern with things on both sides of the ball that they just aren’t prepared to deal with. War Eagle.

Joe Pa and the Nittany Lions represent the Big Ten’s best shot at re-establishing some credibility this post season. Penn State is actually favored to win this game. I’m not a Miles fan by any stretch and I’m well aware that he is likely to make some of the most bonehead calls fathomable by a head coach at the worst possible times. Despite his shortcomings I still think the Bayou Bengals have the potential to make short work of Penn State. The Nittany Lions have played two ranked teams this year in Iowa and Ohio State and they lost those games by 11 and 17 points respectively. I anticipate seeing them lose this one too.

So the Gator Bowl took the Noles at 6-6 just to set up Bobby Bowden’s final game against his former team the Mountaineers. You would like to think that the Noles would get it together enough to give their legendary coach a proper send off in light of his being shown the door by the program he put on the map. But the horrible truth is that Florida State’s defense is just plain bad, and QB Christian Ponder will not play in this game due to injury. His replacement E.J. Manuel has started three games and thrown 2 TD passes and 6 interceptions in his stead. I think we are going to see a lot of Noel Devine cutting up the FSU defense while the West Virginia defense takes advantage of FSU mistakes to create turnovers. Mountaineers win, couches burn and Bowden makes his exit on a 6-7 season.

Ohio State has lost three consecutive BCS games and I don’t see them snapping the streak this year against Oregon. The Quack Attack cut up a USC defense that kept the Buckeyes in check earlier this year and I think it is likely that they will do something similar to the Bucks in Pasadena. The Ohio State offense is also one dimensional because Pryor doesn’t throw well so despite the talk on ESPN about how Tressel is going to "unleash Pryor" for this game I don’t see them busting loose against Oregon in the Rose Bowl. Oregon’s uniforms might be the most captivating thing on the field in this one. Webfoot U should roll.

I am anticipating much hand wringing on the ND message boards after this game. Cincy was out gunned in this matchup before Brian Kelly took the Notre Dame job, and with an interim staff that is likely more concerned with where they will all be coaching next season running the show this one could get ugly. The Bearcats did just hire Butch Jones from Central Michigan but he is only "observing" for this game whatever that means. It won’t matter. Florida has something to prove after getting pasted by Alabama in the SEC Championship and everybody’s All American Tim Tebow will be taking the field for the final time as a Gator. This game has all the makings of a full fledged blowout. Gators roll.

This is the type of annoying scheduling that I was alluding to earlier. Who the hell let these games end up in this order? One night you are watching the Sugar Bowl, then you wake up, crack a beer to make your hands stop shaking, turn the TV on and the International Bowl is on. Seriously? I really wish we could go back to just having an insane flurry of games on New Year's Eve and New Year's day that required four TV's to watch. It was all over before the holidays ended and you had to return to work. That was utopia. Oh well. As for the game itself Bulls front man Jim Leavett looks like he is about to clear some false accusations that he was choking players at halftime which gives the Bulls something extra to rally around. I can’t jump on a 7-5 MAC team. The Huskies are decent except for that 109th ranked pass defense, which I expect the Bulls to take full advantage of. Not to mention South Florida has a little bit of speed. Bulls roll.

This was another tough pick. South Carolina has a bad offense and a good defense. UConn is pretty mediocre across the board with the exceptions being a particularly bad pass defense and equally good rushing attack. So what gives? If Stephen Garcia can successfully throw it around a little bit the Gamecocks run away with it. If Garcia is sketchy then, UConn pulls the upset.

How fitting that these two teams meet in the Cotton Bowl after both being preseason media darlings that were supposed to make runs at the BCS. I find it a little sad that the game will not be played in the actual Cotton Bowl but instead has relocated over to the new Cowboys Stadium. Whatever. This matchup sets up well for Ole Miss QB Jevan Snead. The ballyhooed Snead will have a chance to put on a show as the Cowboys are 93rd in the nation in pass defense. Conversely Ole Miss has a solid defense particularly against the pass so the Cowboys will have to run the football well to win this game. Okie State QB Zac Robinson has had a gimpy ankle most of the year but claims he will be ready to play. We’ll see how he holds up. Both teams have played some stiff competition this season but Okie State let Houston hang 45 on them early then got completely worked over by Texas and Oklahoma. I like Snead and Ole Miss to win their second straight Cotton Bowl.

Michigan State is preoccupied with guys getting kicked off the team and suspended for a big campus brawl. Meanwhile the Dread Pirate is down in Lubbock drilling the Raiders on their fast break passing attack and dreaming up random off hand comments to make to the media once he gets to San Antonio. Texas Tech tends to be lethal in bowl games as teams that don’t play them regularly have all kinds of problems bottling up their crazy offense. I expect more of the same out of Michigan State. Raiders roll.

This might be the best BCS game aside from the National Championship contest. That said I was really hoping these two teams would play someone else. I think either of these teams would expose Iowa and I would have really liked to see one of them lock horns with a real heavyweight like Florida. It would have given the little guys a chance to make more of a statement than they can by playing each other. No matter, this is how it shook out. It is a repeat matchup of last year’s Poinsettia Bowl which TCU won 17-16. I like the Horned Frogs to repeat that feat but it should be a great game either way. It is a bummer I won’t be able to make it in person but I’m sure that the Coach and his crew will enjoy the trip to Glendale nonetheless.

This is by far the most lame of all the BCS games. Kudos to Paul Johnson for winning an ACC title in his second season but Iowa is the lamest of potential opponents. The Hawkeyes mastered the art of escaping by the skin of their teeth all season and really ended up back dooring their way into this game by default. Iowa is outmanned in this one but the one saving grace for them is Ferentz tends to have his teams ready to play in bowl games. Georgia Tech didn’t fare well in their bowl game last year to Paul Johnson will need to make sure his team shows up ready to play. I think he will make that happen and GT will roll.

This game is by far the most egregious case of horrendous scheduling. After watching four BCS games and all the other big bowls who is going to tune into this one? Even I will have to make myself try to watch this and will undoubtedly fail. Dan LeFevour leads the Chips in his last game minus a head coach as Butch Jones has already moved on to Cincinnati. I really don’t care but I’ll pick Central Michigan anyway. That will probably prove to be a mistake on my part.

Alabama’s star running back just won the Heisman. Texas Quarterback Colt McCoy was one of the finalists in New York watching him win the award. All the talking heads make it sound like Texas doesn’t have much of a chance. The game is at the Rose Bowl. Any of this sound familiar? It does to me. The last time the BCS Championship Game had this script Vince Young led Texas to an upset of USC in what was perhaps the best college football games of the decade. But that isn’t the only reason I’m picking Texas in this one. Alabama lives and dies by running the football with Mark Ingram and Trent Richardson. Texas happens to have the #1 defense in the nation against the run and in my opinion they also have the best defensive coordinator in Will Muschamp. Muschamp also happens to have a fair amount of previous experience on Nick Saban’s staffs at LSU and with the Miami Dolphins. With a month to prepare I think there is a very good chance that the Texas defense shuts down Ingram, who has the burden of the Heisman bowl jinx, and the Bama rushing attack. Conversely Alabama will likely return the favor as the Texas rushing attack is relatively pedestrian overall. Once that happens the game turns into a quarterback battle between Colt McCoy and Greg McElroy. I’ll take McCoy in that scenario. I like the Horns in a close and relatively low scoring game that might actually live up to the billing.