The OFD 2009 Bowl Preview Part I- Setting the Table

Share All sharing options for: The OFD 2009 Bowl Preview Part I- Setting the Table 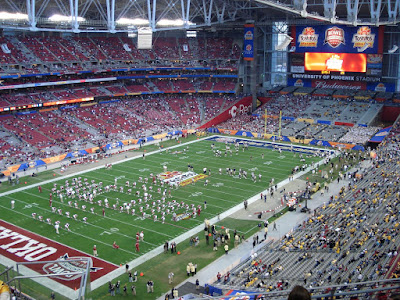 Is it really that time again? Is it just me or did this season go by really fast? This was the first season in several years where I wasn’t insanely busy throughout at least a portion of it which was a nice change of pace. After living in Southern California and Arizona for almost 10 years I brought OFD headquarters back to Northern Virginia for a year to knock out a Master’s program. It has been a nice change of pace and for the first time in what seems like forever I was able to pack in a full Saturday of college football every week and even had the chance to go to a handful of games. I went to both Nebraska and Boston College at Virginia Tech with my favorite brother-in-law the Deer Hunter. I was also able to get back to South Bend to see ND snap the streak against Boston College and went up to Pittsburgh to catch the Irish there as well. Not such a good outcome that time around. I finished up last weekend with a trip to the Army-Navy game in Philadelphia. I really enjoy going to games especially at venues I haven’t been to before. I always like taking in a new stadium and getting to spend a little time with the different fan bases.

I obviously would have preferred that the Irish not have another November flameout but it is what it is and it is time to move on. While the Irish are busy resetting under new Head Coach Brian Kelly I will still settle in for my favorite time of the year despite their absence. I plan to make an honest effort to watch all 34 of these Bowl Games and I expect to pull it off. Unfortunately I won’t be attending any Bowl Games this year for the first time in what seems like forever so I have 100+ hours of HD TV in my immediate future. Spending this season transplanted to the East Coast is jacking up my bowl routine, but the tradeoff was being able to catch a few regular season games that I wouldn’t have if I weren’t out here. Next season I should be back on the West Coast and I will resume my usual routine of going to both the Holiday Bowl and the Fiesta Bowl at a minimum. I will also have tickets to the title game next season and I plan to be there for that too. No I won’t sell them but if you need a tip on how to try and score some at face value right now shoot me an email. In the mean time the Coach will be utilizing my Fiesta Bowl tickets this year while I take in the majority of the games with the Deer Hunter in his man cave.

Last May I did a series of posts on the history of the Bowl Games and the BCS. That wasn’t too long after I started OFD and at the time only about five people were reading it. I don’t typically recycle my own posts but in retrospect I probably should have put those in the can until this week. Rookie mistake. So if you are interested in the full spectrum of what I think about the bowl system, want to get another perspective in preparation for holiday party bowl system arguments or just want to procrastinate a bit longer at work check them out. The links are below. If you agree or disagree and want to leave a comment please do so under this post as it will be easier to track the conversation that way. I will preview all 34 of the upcoming bowl games in the next few days in two installments. I will do a post for the December games and a post for the January games. Those posts will be up in the next couple of days. In the mean time I hope your holiday break starts soon and as always thanks for stopping by.

The BCS Conversation Part I- History

The BCS Conversation Part II- We Got Screwed!

The BCS Conversation Part III- Too Many Bowl Games

The BCS Conversation Part IV- Be Careful What You Wish For