"The U"- Flashbacks to Sportsmanship Hell

Share All sharing options for: "The U"- Flashbacks to Sportsmanship Hell 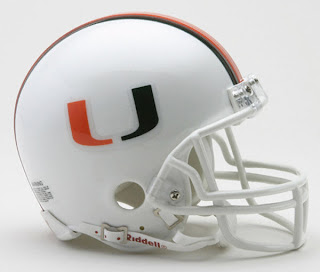 I have enjoyed all the installments of the ESPN "30 for 30" series but the latest episode titled "The U" was my favorite thus far.

It originally aired on Saturday night and has aired as a repeat several times since. If you like college football and you haven’t watched it yet I highly recommend it. Set your DVR and it will inevitably turn up again in the middle of the night on one of the 50 ESPN channels.

I’ll start by saying that I absolutely loathed those Miami teams of the Schnellenberger/ Johnson/ Erickson era but I really enjoyed the documentary for a few reasons. For starters it was just a good refresher course on the degree to which I utterly and completely couldn’t stand those bastards. My life as a fan started when I was a kid in the early 80’s and in all of the years that have followed there has always been a team that epitomized everything I feel you should root against. Every era has those teams. They are like the bad guys in movies, they present a formidable foe and in some cases they just kick your ass and laugh at you which amps your loathing of them up even more. In my lifetime that torch has been passed from Oklahoma to Miami to Florida State to USC.

The documentary does an outstanding job of capturing the fact that the Miami teams of that era took what you might call a bad boy image to a whole new level that hasn’t truly been matched since and probably never will.

The opening montage featuring an "Uncle Luke" a.k.a. Luther Campbell hip hop custom soundtrack and a series of clips featuring assorted Hurricane celebration antics from that era was enough to teleport me right back to the 80's immediately. An unfortunate side effect of the catchy intro is that my almost two year old son apparently loves the song and has been randomly blurting out "The U" in conjunction with some little head bob/ dance for the last three days while going about his usual business of destroying the house.

He will remediate until that problem is corrected. I'll make him watch some old ND games this weekend. Back to the documentary.

The film offers a great review of just how Miami came to be who they were and does a great job telling the story. The rehash of the 1991 Cotton Bowl shellacking of Texas was of particular interest to me as I have a very clear memory of watching that game. Growing up with my Dad we watched Notre Dame, the Southwest Conference and the Big 8. That’s what was on in Texas. The Cotton Bowl was a big deal around our house when I was a kid and the SWC Champs played in it every New Year’s Day back then. We had been keeping a very close eye on Texas that season as one of my Dad’s former high school players was having a great season for the Horns that year. That game turned into arguably the most over the top display of in your face "unsportsmanlike conduct" in college football history.

In the midst of the 200+ yards of Miami penalties they managed to beat Texas down pretty good. Maybe when things calm down I’ll see if said former player has time to talk about that game so that I can pass along his perspective. We talked about it several years ago but trying to rehash his two cents 15 years after the orinal conversation wouldn't do it justice.

There are also several interview clips in the film with the Miami players from that era and to this day the vast majority of them still appear to have the exact same attitude they did back then. Pretty amazing. I will absolutely concede that despite the way they acted those Miami teams were serious. So a tip of the hat there. Those guys could flat out play football and between the over the top celebrations they flat got after it. Nobody wanted a piece of those dudes. They were amongst the greatest of college football antagonists.

Scipio Tex at Barking Carnival posted his two cents on "The U" a little earlier and I highly recommend you read what he has to say about it as well. Scipio has real skills, and I always enjoy reading his stuff.