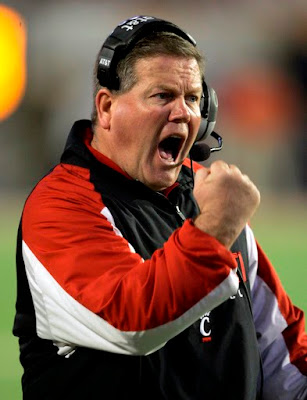 About an hour ago the South Bend Tribune reported that Brian Kelly will be the next Head Coach at Notre Dame. Several other media outlets have followed suit in reporting the same. It is expected that there will be an official announcement from Notre Dame tomorrow. Coach Kelly is at the Cincinnati Football banquet as I type this and he supposedly called a team meeting an hour prior to the event. The media was also banned from the banquet earlier this afternoon. It is safe to assume that he is in the process of breaking the news as the undefeated Bearcats are about to prepare for a Sugar Bowl showdown with Florida. To this point everything I have read leads me to believe that Kelly will not coach the Bearcats in the Sugar Bowl so that he can get started in South Bend immediately. I hope that is in fact the case. I will stand by to see what Coach Kelly has to say in the next 24 hours before I get too spooled up in either direction about the hire. I have some preconceived notions, both positive and negative, that I'll try to sit on for the time being. The staff that he hires and his ability to finish up the current recruiting class will weigh heavily on how I ultimately perceive the beginning of the Brian Kelly era in South Bend. At least the search is over, the rumors were a bit maddening to say the least. I'll let it all set in a bit and do some reading over the weekend before I post the full data dump on what I think about the hire. In the interim congrats to Coach Kelly and welcome to the most scrutinized coaching job in college football. I sincerely hope you can get it done.