The week in news- Army-Navy, The Heisman and the ND Coaching Search

Share All sharing options for: The week in news- Army-Navy, The Heisman and the ND Coaching Search 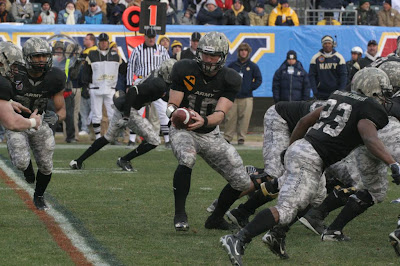 There are a smattering of things going on this week that I have on the brain so I figured now was as good of a time as any to bring back the TWIN posts. I haven't done one in a while so here are a few things to think about as the bowl season looms around the corner.

Army-Navy
The two service academies will meet for the 110th time at Lincoln Financial Field in Philadelphia on Saturday and I am pleased to say that I will be in attendance. I got an invite earlier this week from a great friend of mine so I'll owe him one. Then again I did name one of my kids after him so I suppose in reality it was the least he could do in return. There are several rivalry games that I would like to attend at some point and Army-Navy is definitely among them, so I am excited to go. The Army-Navy game represents several of my favorite things about being an American and I will consider it an honor to see it in person. It is also the final game of the 2009 regular season and as such it is sort of a bowl before the bowls. The friend I am going with and his family are hard core Navy fans so I will have to try and forget the fact that Navy has plenty to do with my current anxiety about the Notre Dame coaching search while I'm there and just enjoy the experience. More on that in a minute. I'll let you know how it was on the back side.
The Heisman
I was really glad to see that Ndamukong Suh is a finalist and making the trip to New York. He deserves it. I could go on about a couple of kids that wore gold helmets this season that I think should be there as well but I know the deal. Six losses is an automatic disqualifier in the eyes of the voters so it is what it is. Here is my two cents on the five finalists.
Tim Tebow- Great career but the only reason he's invited is because he won it two years ago. His numbers this season were mediocre at best and getting run ruled by Bama last weekend sealed the deal. I expect he will finish 5 of 5.
Mark Ingram- In my opinion Ingram is most likely to win the award which amazingly will be the 1st in Alabama history. That said I think there are probably 20 other running backs in the country that would look equally as great running behind the Alabama offensive line to include his backup Trent Richardson. In short color me not that impressed. The kid is good but not Heisman good he just happens to play with an outstanding supporting cast.
Toby Gearhart- This kid is pretty much the opposite of Ingram as he gets a lot of his yards on his own. Gearhart runs big, hard and downhill all the time and he's tough to bring down. I'm glad to see he's making the trip and consider him a dark horse to win it.
Colt McCoy- McCoy has had a pretty stellar four year career at Texas but not such a great 2009 statistically. The 12 picks in particular don't scream Heisman. He did lead his team to a 13-0 record and he'll be playing for a National Title next month which is really probably the only statistic he cares about. I like Colt but he won't win the award.
Ndamukong Suh- If you read OFD with any sort of regularity you probably already know that I think this kid is the best player in college football this season. I attended the Nebraska game at Virginia Tech earlier this year and he quickly made an impression on me. I have kept a pretty close eye on him ever since and really enjoy watching him play. Nebraska is probably 4 wins better with him than they would have been without him. He single handedly changes the complexion of games and routinely beats double teams to wreak havoc. He's a man amongst boys and I would really like to see him become the first pure defensive player to win the award. He deserves it.
My ballot would go- Suh, Gearhart, McCoy
Is Notre Dame going to hire Brian Kelly or what?
This coaching search is making me mental. The likelihood of Athletic Director Jack Swarbrick landing a "home run" hire at this point appear to be pretty much nonexistent. From there you start going through a menagerie of guys with assorted pieces and parts of what I consider to be the desired list of qualifications and the horrible truth is there really is no single "attainable" coach out there that fits the bill 100%. I suppose on paper Kelly is probably as good or better than the other names being bandied about so as a fan I'll just have to ride it out and see how it goes. I just hope that the University backs whoever they hire with the required support and resources to facilitate said individual being successful. That will primarily come in the form of enough money to go out and hire top flight assistants in particular a bad ass defensive coordinator. If it ends up being Kelly I will be very interested to watch him build his staff and start recruiting with the big boys.