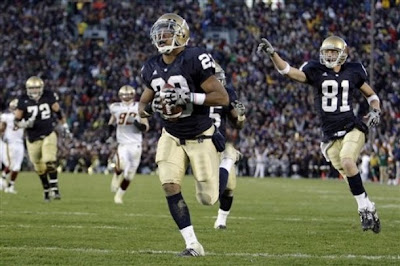 Like every other Notre Dame fan I find myself sitting here on a Friday night, hours removed from the official word that the Fighting Irish will not be playing in a bowl game and slowly coming to grips with the fact that the 2009 season is officially over. Real life has been exceptionally hectic this last month and as a result I don’t think I totally absorbed the events of one of the worst months in Notre Dame Football history. My wife and daughter took the train up to NYC today for a "girls weekend" and I put my little guy in bed a little while ago. Now I’m sitting on the couch, cracking beers, watching a pretty uninteresting MAC Championship and for the first time since the nosedive started I really have time to think about it. What can only be called a spectacular flameout is finally kind of settling in with me.

Charlie Weis was fired four days ago and we have laid witness to one of the most spectacular media circuses of all time in the wake of that announcement. It has been a week filled with rumors, speculation, more rumors, message board hysteria and a whole host of other side bar issues that are generally annoying as all hell. Is all of this really happening? Really? I make a concerted effort to watch my language when I write my posts because you never know who is reading it. But the most perfect way to sum up this season is simply to say what the F#@K"? Seriously! I will apologize in advance for the flowing stream of consciousness.

As I wrapped up spring practice last April I made the following comment.

At the end of the day the only team that can keep Notre Dame out of the 2009 BCS mix is Notre Dame.

I actually recycled that same comment for my 2009 Notre Dame preseason preview. When I wrote that I really thought worst case scenario would be an 8-4 campaign that would bring the retain/fire Weis debate back to the forefront. Ten wins was attainable. Dropping 6 games, Weis being fired without debate and not going bowling didn’t even seem possible. But that’s where we are and that comment I made proved to be even more true than I ever thought it could be. I think that’s what made this flameout so painful to watch. It wasn’t like Notre Dame was getting blasted by teams that were just better than they were. They just continuously found ways to blow games they should have been winning and keeping games close that should have been comfortable victories. Twenty years from now I’ll probably still look back at this season and wonder how a Notre Dame team with that roster, that schedule and dare I say those coaches found a way to lose six games. I wrote up reviews of each game during the season so I won’t rehash them all in detail, but here’s a quick synopsis of how it all went and what I was thinking at the time.

My biggest concern heading into the season was this team learning how to win. To a degree 2007 was going to be inevitable. Not necessarily 3-9 inevitable but strictly based on the personnel it was going to be rough. Since I went into it bracing for impact I really spent the whole year looking for individual improvement and a glimmmer of hope for 2008. I thought the biggest ramification of that 2007 disaster was going to be the mental state of the many freshmen and sophomores that were on the field. It isn't easy to get that beat up and then fight your way back into a winning attitude. I thought that the 2008 blown leads against North Carolina, Pitt and Syracuse were indicative of the fact that the mental monkey was still on the team’s back. That would be the biggest issue the team would need to overcome in 2009 to get back on top.

The 35-0 win over Nevada to open the season was a good start. The passing game looked great and despite a suspect run defense Tenuta’s D pitched a shutout. The trip to Ann Arbor the next week didn't go so well. The Irish played against both the Wolverines and the officials in week two. I hate even saying that but the officiating was perhaps the worst I have ever seen. They literally took points off the board, didn’t call multiple Michigan personal fouls, pass interference penalties, and negated multiple Irish big gains with suspect calls. The Irish made their own lives hard by allowing a kick return for six and not making defensive stops when needed but the whole mix was lethal. It was a 1-1 start and I was concerned that a team with some mental fragility might not bounce back. The team followed that up with three consecutive thrilling victories against Michigan State, Purdue and Washington. Those games were both frustrating and fun to watch. I took it as a good sign that the team was turning that mental corner. Despite the fact that those games should not have been that close the team had found ways to win which I thought was a significant step forward.

The USC game was brutal. Everson Griffin dominated both Irish offensive tackles and Harrison Smith had a rough go of it. Despite that the Irish had a chance to tie the game as time expired and fell short when Duval Kamara slipped coming out of his break. It was rough. I was ven more concerned about whether or not the team could bounce back from that one mentally but they did. The next week I traveled to South Bend and watched the Irish overcome their own mistakes to win a game that looked a little like those close wins earlier in the season. I was able to chalk that one up as a USC hangover but that was the end of the line. It was absolutely time to take that next mental step and start really taking care of business down the home stretch. The following week the team was off to San Antonio for the "barnstorming" game against Washington State. Wazzu is terrible and the Irish rolled. Golden Tate had one of several unbelievable performances for the year and backup QB Dayne Crist went down hard late in the game with an ACL. The Irish entered November with four winnable games remaining and BCS buzz around the program. It was going to be the defining month of the Weis tenure one way or another.

It got off to the
worst start possible. Navy rolled into Notre Dame Stadium and the train came completely off the tracks. The Navy game was the most obvious and damning example of the Irish beating themselves. Missed field goals and red zone failures turned a comfortable three TD victory into the second stunning loss to Navy in three years. That loss essentially sealed Weis’ fate and set the tone for the subsequent full blown flameout. I traveled to Pitt the next week and watched the Irish offense sputter around for the second consecutive week in another loss. The subsequent lost to UCONN was absolutely brutal which set up last week’s season finale at Stanford. Clausen, Tate and Floyd put on a show but the Irish defense couldn’t hold up their end of the deal. Flameout complete.

On Sunday evening the BCS matchups will be announced as will the full slate of Bowl Games. The Fighting Irish won’t be one of the 68 teams slated to play. Jimmy Clausen is currently #4 on Mel Kiper’s Big Board and will likely enter the NFL draft this spring. He will leave as arguably the best QB in Notre Dame history but with a sub .500 record. Golden Tate was a human highlight reel all season and was selected as an All American. It is highly likely that Tate will enter the draft as well. Sam Young will also be drafted this spring and a handful of younger players will most likely adorn NFL rosters in the years to come. Michael Floyd, Kyle Rudolph and Manti Te’o will certainly be top picks and several other players have the potential to develop into NFL prospects as well.

So what went wrong? How could a team with this much offensive firepower go 6-6? At the most basic level it was defense and mistakes. The defense is a strange case. In 2007 Corwin Brown took over, switched to a 3-4 and the defense was actually pretty decent. The numbers don’t say so but they generally played pretty well early in the game and were just on the field so much that they tended to give up big numbers in the second half. In 2008 Tenuta joined the staff and was regarded as one of the best defensive minds in the game. The Tenuta/ Brown brain trust regressed. It became "34 personnel" which basically meant they lined up in a 3-4 under which is essentially a base 4-3. 2008 wasn’t too bad but this year’s defense had major issues. Tenuta took over play calling duties and officially moved to a 4-3. The most glaring issue all season was the most basic of defensive fundamentals. This team was absolutely terrible tackling. With the exception of Manti Te'o there were ten "shoulder throwers" running around out there. I have never seen a team not wrap up like this year’s Notre Dame team. It was maddening.

So here we are. The season is over, Weis is gone and who the next coach will be is being hotly debated with no concrete leads. Whoever takes over as Head Coach will inherit a team with significant starting experience and roster with a lot of raw talent. What should have been will never be and it is time to move on. There is a long list of areas that need improvement in 2010 but most importantly the Fighting Irish need a new attitude. Perhaps the regime change will allow for a mental cleansing that facilitates such a mental shift. At some point I will try to carve out the time to talk about all the things I hope the new head coach brings the most important is that attitude change. If Weis had a tragic flaw it was the fact that his teams were too businesslike. They never came out of the tunnel fired up, they came out looking like they were going to work. I realize that is an NFL mentality but it doesn’t work in the college game. Real passion, and excitement are required. Teams have to play with a chip on their shoulder and play with all out aggressiveness for 60 minutes each week. If that means you run it up on somebody so be it. I hope the new regime brings an attitude like that to Notre Dame. Then perhaps the Irish can finally turn that mental corner.