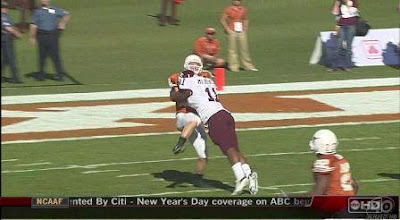 Rivalry Week is upon us. I can’t believe the regular season is already drawing to a close. Rivalry Week represents the final weekend with a full slate of games as most teams will play their final game on Saturday. The Big Ten already finished last week. Next weekend we’ll have the Conference Championships and a smattering of other random games then it will be on to the Bowl Games. If you had told me before the season started that heading into this weekend Notre Dame, Oklahoma, Florida State, and Georgia would all need a win this weekend to finish above .500 I would have laughed out loud but that’s exactly where they are. Only in College Football.

Combined with the Thanksgiving holiday this is one of my favorite weeks of the season. On Thanksgiving Day you watch the Horns mix it up with the Aggies then follow that up with more good rivalry games on Friday and Saturday. There is no better routine to follow a great Thanksgiving Dinner. In a couple of hours I will be loading up the team in the family truckster and heading south out of the D.C metro area with a billion other people. Fortunately I don’t have far to go. I will be spending the holiday in Blacksburg with the wife’s family so I’ll be able to play backyard football with all the kids and seek refuge in the Deer Hunter’s man cave at night to watch college football and pound beers. I tried to talk the Deer Hunter into heading over to Charlottesville on Saturday to watch the VT vs. Virginia game just because I wanted to check out another stadium etc. But the Deer Hunter, being who he is, opted to go hunting that morning vice driving two hours to watch his beloved Hokies. Oh well, I suppose I’ll hole up and take in the full slate of games in his man cave instead. I will show him no mercy on the late night beer pounding despite his early morning escapades in the woods. With that here is what I'm thinking about the games this weekend.
Thursday 26 November
Texas at Texas A&M;- This installment of the Lone Star Showdown is a no brainer. I still can’t believe they never came up with a better name for this game. Colt McCoy and company control their own destiny at a title shot and they won’t let it be derailed at Kyle Field. Expect Colt and Jordan Shipley to have a field day. I have to think that Colt still has a chip on his shoulder about that brutal pounding he took from the farmers as a freshman. Colt will serve the Ags plates full of hot and steamy death as retribution one final time this Thursday. I’ll also keep an eye on Texas DC Will Muschamp during the game. He has the Horn defense playing like a pack of wild animals right now and the guy is a blast to watch on the sidelines. No coach in the country is more into it than that guy. It will be interesting to see if anyone tries to poach him for a head job in the coming weeks.

Friday 27 November
Illinois at Cincinnati- The Zooker will likely take another one on the chin Saturday, but I will still keep an eye on this game. With all the buzz around Brian Kelly as the next big thing I’m still trying to find a reason to conclude that he might be the next Urban Meyer vice the next Dennis Franchione.

Alabama at Auburn- At 7-4 Auburn could potentially make this Iron Bowl more interesting than expected. Then again no matter what Chzik and Malzahn throw at him Saban will stick to the script and dominate the line of scrimmage for 60 minutes. Bama does nothing fancy they just line up and beat you with basics and fundamentals. Auburn will end up on the short end of that approach at Jordan-Hare on Saturday. Urban will have his hands full next week in the SEC Championship.

Nebraska at Colorado- Nebraska is one of the best stories of the year that no one is talking about. Bo Pelini is doing a great job in Lincoln and has one of the best defenses in the country. It is almost hard to believe that the "Blackshirts" were a paper tiger in the Callahan era. They aren’t any more. I’ll stay on the Ndamukong Suh bandwagon and tune in just to watch him ruin Dan Hawkins’ day. The kid is a beast.

Pitt at West Virginia- This Backyard Brawl will take place in Morgantown this year so couch burning is not out of the question. As much as I hate to admit it, the Stache has done a good job with this Pitt team. They stick to the same script that Bama does and it is effective. That isn’t to say they are anywhere near as good as Bama but they play solid football along the lines of scrimmage and wear opponents down with an effective rushing attack. So long as they can keep Noel Devine from busting too many long ones the Panthers should pull this one out.

Nevada at Boise State- Strangely this might be the toughest game on the Broncos schedule since they beat Oregon in the season opener. Colin Kaepernick is a factor but I expect Boise State to remain undefeated with their standard arsenal of the spread and a smattering of trick plays. This one should at least be an entertaining game with a lot of points scored.

Saturday 28 November
Notre Dame at Stanford- Stanford is the only team Charlie Weis is undefeated against in his tenure at Notre Dame. The odds of him holding onto that streak in what is most likely his final appearance as the Notre Dame head coach are not good. Jim Harbaugh has established a punishing ground attack at Stanford and after screwing around and losing "The Game" last weekend I expect the trees will come out ready to mix it up on Saturday night. Running back Toby Gearhart and QB Andrew Luck are both very good players that will be looking to showcase their skills in a prime time game against the Irish. That said playing this final game on the road is probably the best thing for Notre Dame. With the home crowd boos and the greater portion of the fan base ready to run Weis out of town getting away from it all will actually be a good thing for the team. They will be able to focus on just winning one for each other. With absolutely nothing to lose at this point expect anything and everything from Notre Dame in this one. Every wrinkle and trick play that Weis ever dreamed up will be on display Saturday night. I hope to see the Irish cut loose and have some fun out there. It would be very therapeutic for the team to end a tumultuous month with an upset victory on the road. I like their chances of pulling it off.

North Carolina at NC State- Butch Davis quietly put together a nice season at Chapel Hill and after they take care of business against the Wolfpack the Heels will be 9-3.

Oklahoma State at Oklahoma- Bedlam heads to Norman this year. Bob Stoops could potentially finish 6-6 this season if he falls to Boone’s boys, but I don’t think it is going to go down like that. Still smarting from another loss in Lubbock, I expect Stoops and his DC Brent Venables will have a few things dialed up for the Okie State offense that will knock them out of a BCS at large berth.

Florida State at Florida- What do they call this now the Battle for the Governor’s Cup or the Sunshine Showdown? It doesn’t matter. Florida will roll and living legend Bobby Bowden will finish 6-6 as well. How come that doesn’t get as much play in the media as Charlie Weis? I wonder….

Virginia Tech at Virginia- Since the Deer Hunter is refusing to go to this one I suppose I’ll be watching it in his man cave while listening to him tell stories about the monster buck that continued to elude him that morning. VT will roll.

Miami at USF- This is a pseudo interesting matchup but I expect the Canes to pull out the W. USF is horrendously inconsistent.

Utah at BYU- The Holy War. The Coogs are favored but you can’t count Kyle Whittingham out in this game. I like the Utes to show up and pull the upset.

Washington at Washington State- The Apple Cup is slightly more intriguing than last year but not by much. The two teams actually have four combined victories this time around but three of them belong to Washington. Wazzu is still terrible and Jake Locker will post big numbers in his curtain call as the Huskies QB.

Arkansas at LSU- I like the Hogs to turn up the heat on Les Miles by pulling off an upset in Red Stick. After his clock fiasco last weekend in a loss to Ole Miss Miles is starting to look like he might be available to escape home to Michigan a year from now when the Dick Rod experiment comes to a close.

Georgia at Georgia Tech- Clean, Old-Fashioned Hate they call it. Man has Georgia been disappointing this year or what? At 6-5 the Dawgs are another team that looks like they will be finishing 6-6. Will Richt catch any heat heading into next season?

UCLA at USC- This one is "too big" to have ever adopted a moniker. Whatever. I imagine Slick Rick will have a good game plan to attack the Trojans but his boys are still at least a year away from posing a viable threat. USC will pull out the W to get to 8-3.

Arizona at Arizona State- The Duel in the Desert will go down at Sun Devil Stadium this year. Tempe is a great town by the way. The Wildcats have a pretty decent football team and I expect that little Stoops will pick up another win here.