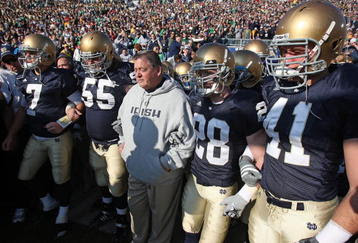 My Dad had me hooked on Notre Dame football by the time I was ten. Of all the Notre Dame games I have watched in the twenty five years that have followed the loss to UConn on Saturday may have been the toughest one yet. It was really hard for me to watch. It started off with a great gesture from the Captains walking out of the tunnel arm in arm with Coach Weis and it obviously meant a lot to him. The finality of it all started to settle in with me right then. After the Navy game I figured that it was highly likely that I would be writing this post in the coming weeks, and when UConn scored the winning touchdown I knew that it was time. It still took me two days to sit down and make myself do it.

I haven’t really talked much about the end of the Weis era because to be completely honest I thought that if he managed to scoop out an 8-4 finish the same people that put together 7-4-1 with matchups against Tulsa and Western Michigan just might call it "progress" and give him another year. But with nothing remaining on the schedule but a highly unlikely 7th win at Stanford this weekend I don’t see how there is any chance that those individuals can retain Weis at this point. There is no way for them to spin it; the decision has been made for them. It is funny how things work out sometimes but in a strange way taking the debate out of the issue is probably a good thing. It makes it a little easier for everyone to move forward.
As frustrating as the last few weeks have been I didn’t want to pile on. As the head coach it starts and stops with Charlie and he has acknowledged as much himself. That’s really all that there is to say about it. With Thanksgiving fast approaching I have tried to reflect a little bit on the last five seasons and think about the aspects of the Weis years that I’m thankful for. Despite being well aware of the fact that it will most likely officially end early next week it feels completely different than it did when Davieham left. They both needed to go and neither of them ever really seemed to grasp the significance of where they were anyway. Those coaching changes didn’t bother me in the least. This time it just feels different. Weis took the job when nobody else really wanted it and he managed to quickly get people excited about Notre Dame Football again. For the first time in a long time there was a buzz around the program. He debunked the myth that Notre Dame could no longer recruit and got back on the right track by going head to head with all the major programs in the nation for top recruits and landed several of them. His players graduated, represented themselves well off the field and to this day seem to truly care for their coach. Most importantly, as an alumnus of the university he "got it" when it came to the culture of the program. The significance of that cannot be understated.
Charlie Weis stepped in at a time when the program was truly on the brink and worked his ass off for five years in an uphill battle to get it back on top. As he weathered the storm of the last three seasons he always showed great character, even when not doing so might have been understandable. It’s regrettable that he wasn’t able to get the program all the way back to the top. It would have been amazing to see a full turnaround two years removed from 3-9, it just wasn’t in the cards. Regardless of who takes over as the new head coach in the coming weeks they will be inheriting a program that is in considerably better shape than the one Weis took over. I hope they are able to make the most of it. As for Coach Weis I’m sure we haven’t seen the last of him yet. I expect he will be back coordinating an NFL offense sooner rather than later and will probably have quite a bit of success doing it. We may even see Quinn or Clausen flourish under his tutelage at the next level. Wherever Charlie Weis ends up I will always keep track of what he is up to and how he is doing. Thanks for everything Coach, I’m sorry it didn’t work out. You gave it everything you had. I hope knowing that you are able to move forward too.