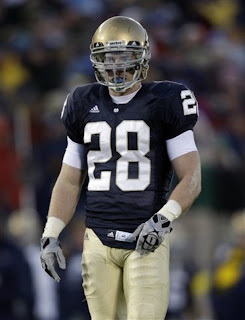 Amidst rampant speculation about the future of Charlie Weis and the Notre Dame Football program as a whole the Irish will face UConn in their final home game this Saturday. The general consensus is that Charlie Weis and his staff will be coaching their final game in front of the home crowd. With any actual information flowing like mud and two regular season games remaining that situation will not be resolved until after the Stanford game next week at the earliest. I am prepared for the gamut of possibilities on that front and won’t be too surprised by anything at this point.

In the mean time twenty seniors will take the field for the last time in Notre Dame Stadium this Saturday representing the end of a long and rocky road for this class. The seniors were the first full recruiting class signed by Charlie Weis following his inaugural 2005 season. As a class they were ranked #8 in the country by Rivals and 28 of them arrived on campus with lofty expectations. In the last four years many of them were beaten out by players from subsequent classes, keeping the starting lineup terminally young and leading to several defections from the class. In total 10 of the original 28 left the program and two additional players, Bobby Burger and Eric Maust, joined the class after earning scholarships. A handful of these players are eligible to apply for a 5th year of eligibility and of those I hope to at least see Dan Wenger, Chris Stewart and Darrin Walls back on the field in 2010.

This group of Seniors will also be joined by the six current 5th year players on the roster. Kyle McCarthy, Evan Sharpley, Scott Smith, Mike Anello, Paul Duncan and Ray Herring have all contributed to the program. Those six players signed letters of intent immediately following the Willingham to Weis transition and represent the final portion of what I call the two "bubble" classes that contributed greatly to the results of 2007. So before getting to the business of answering the questions I just wanted to throw a hearty thank you out to all of these players. I know it didn’t quite turn out like any of them wanted to but all of their contributions and effort are very much appreciated. Now on with the IBG.

This week’s questions are put forth by Sarah at Bad Trade. So head over there to see a comprehensive set of links to the responses of all the IBG members as they flow in over the next couple of days.

Good- Golden Tate is a very special football player.
Bad- The officials, especially the replay crew in the booth.
Ugly- Six explosive plays given up by the defense. Those killed.

2. UConn this week. Does the sellout streak end? Do you care if it does end? And if it does, does this have any meaning beyond it being the end of yet another ND streak during the Charlie Weis era?

I really hope it doesn’t end this weekend. I’m well aware that there is a fair amount of smoke and mirrors involved in all sellout streaks but to me the sellout streak says a lot about the culture surrounding Notre Dame football. Not to mention if it does end that will just be one more thing for the national media to yammer on about all next week.

3. UConn is coming off of a bye week, with three losses just before that, including close losses to West Virginia and Cincinnati. The last time they won was just before cornerback Jaspar Howard was killed. These factors - along with ND's sorry performances recently - suggest to me that UConn is a dangerous team for a Notre Dame team that could really use a win going into Stanford. Should I be worried about this game? And what should I be worried about?

I talked about this a little bit a couple of days ago. UConn is about as dangerous of an opponent as ND could possibly have this week. The Huskies have dropped three straight heart breakers in the wake of losing their teammate and they had a bye last week for some extra preparation. A win in Notre Dame Stadium this Saturday would be the highlight of their season and they will show up ready to fight for it. Conversely the Irish were a fringe BCS contender two weeks ago. Now after dropping two straight to Navy and Pitt the Irish find themselves trying to prepare for this game in the midst of a media circus about the future of their head coach and the program at large. I don’t care what any of the players or coaches say to the media that major distraction is in their heads to some degree. That all makes for a very bad formula heading into this game on Saturday. The only real hope is that the reality of the seniors playing their last home game and all the other madness surrounding the program pulls them together with a common focus to prevent a repeat of the 2008 loss to Syracuse in the final home game. UConn is considerably better than Syracuse was by the way….

4. Notre Dame will be seeing a familiar face in UConn quarterback Zach Frazer. Is there anyone who transferred out of Notre Dame, or who the Irish nearly got in the recruiting process, that you think would have made a significant difference on this year's team?

For the transfers Joseph Fauria. He appeared to be coming into his own and could have helped ou
t this year especially now that Rudolph is injured.

For the recruits any of the potentially dominant defensive linemen that fell out. Gerald McCoy, Justin Trattou, and Omar Hunter come to mind.

5. I, for one, was very optimistic at the beginning of the season. Now, at 6-4, I am nearly disgusted with this team, and I admit to some actions regarding Notre Dame football that I never thought I would engage in. I can't imagine I am alone. Have you done anything this season - turn off games at halftime, leave early, not watch at all, etc. - that smack of desperation and disgust with this team?

I can honestly say I haven’t really changed my routine. In addition to being a rather over the top Notre Dame fan I am also a full fledged college football junkie. I watch every game that I can with the Notre Dame game obviously taking priority over all others. I was in attendance for BC and Pitt, and watched every other game at home. I even DVR the ND games and review them on Sunday afternoon with a little more scrutiny. I suppose that might make me a glutton for punishment but if I were going to characterize it I would describe it as loyal to the point of it being a fault. I’m that way with everything and Notre Dame Football is no exception. I’ll be tuning in Saturday as per usual hoping to see the Irish mix it up and hopefully have some fun out there picking up a win.