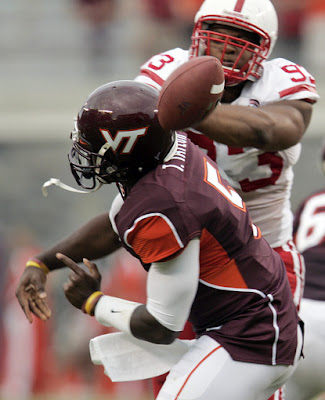 Is it already week 12? Where did the season go? As things wind down over the final two weeks of the regular season the stakes are high for several teams. Undefeated seasons, conference titles, divisional titles, and bowl eligibility are all on the line in several games this weekend. Some teams are even hanging on amidst rampant speculation that their coach will soon be unemployed. I suppose that makes it a standard November in college football. Here are the games I’m most interested in this week.

Wednesday 18 November
Central Michigan at Ball State- Sweet, we can watch Dan LeFevour hang Playstation numbers on another MAC bottom feeder for the second consecutive Wednesday night. Beats whatever the wife is watching.

Thursday 19 November
Colorado at Oklahoma State- At this point Dan Hawkins probably wishes this game wasn’t going to be televised. At 3-7 the Buffs front man is quietly riding out his final days at the helm in Boulder, but before he’ll have a chance to slip out quietly he’ll have to spend Thursday evening with Mark May waxing intellectual for four hours about all the reasons he failed. I’m certain May will create several instances to make comparisons between Hawkins and Charlie Weis to get Lou Holtz riled up. I’ll probably keep an eye on this one with no sound. Oklahoma State should run away with this one at Boone's house throwing additional fuel on the Hawkins fire.

Friday 20 November
Boise State at Utah State- Utah State is one of the worst teams in the WAC. Boise State will run rule the Aggies.

Saturday 21 November
UCONN at Notre Dame- UCONN has lost 5 games by 2,3,4,4, and 2 points. The Huskies are also still due for a big emotional win following the loss of a teammate three weeks ago. To top it off UCONN is coming off of a bye and it goes without saying that a win in Notre Dame Stadium would make their season. None of this is good for a Notre Dame team that has more than a few distractions at the moment. With the media frenzy currently surrounding the future of Charlie Weis it will take a concerted effort from the entire program this week to ensure that the Irish show up ready to play on Saturday. It won’t happen on Senior Day twice in a row will it? It had better not. With the season in its current state there is no reason the Irish should not come out swinging and play like they have nothing to lose. It would be nice to see this team have a little fun out there for a change.

Ohio State at Michigan- At 5-6 the Wolverines have to pull the upset to be bowl eligible. Unfortunately for Dick Rod it isn’t likely as the only Wolverine victory since September came against Delaware State. Ohio State should roll here leaving Michigan home for the second consecutive bowl season.

Oklahoma at Texas Tech- Oklahoma is a favorite here but the Sooners have struggled in their last few trips to the Hub City. I’m sure the Dread Pirate will be looking for revenge after the beat down his boys took in Norman last fall. This one has the potential to be entertaining.

LSU at Ole Miss- The Rebs are actually favored in this game which I found surprising. This is a chance for them to regain some street cred after falling off the map in the face of some intense preseason media hype. With Jordan Jefferson back at QB I think the Bayou Bengals will take care of business in this one.

Kansas State at Nebraska- The Huskers can lock up the Big 12 North and a date with Texas in the Big 12 Championship if they dispose of K State on Saturday. Given the history between Bo Pelini and Bill Snyder I don’t anticipate the Huskers letting this one get away from them. If you haven’t made time to watch Nebraska play this season carve out some time to sit down and watch them on Saturday night. Ndamukong Suh is an unbelievable force on the defensive line and if you like college football you owe it to yourself to watch this kid play. In my opinion he is the best player in college football this year. No single player contributes more to his team than Suh does and its damn near criminal that he won’t be in New York come Heisman time. Just watch him on Saturday night and you will go to bed wondering how much better your team would have been this season if Suh was playing for them.

Kansas at Texas- Kansas is another team that started the season with fairly lofty expectations but find themselves at 5-5. Mangino is definitely on the hot seat at the moment and taking his lumps. A trip to Austin probably won’t do much to help his cause. The Horns will roll at home and Reesing will spend the evening running for his life in the face of a nasty Muschamp defense.

Oregon at Arizona- This one is pseudo interesting as Oregon is still in control of their own Rose Bowl destiny and the Wildcats are playing well. The Cats haven’t lost at home all season. With two high flying offenses this one should be a barn burner. I’ll take Arizona in the upset at home.