Week 11 Wrap Up- That Was Brutal

Share All sharing options for: Week 11 Wrap Up- That Was Brutal 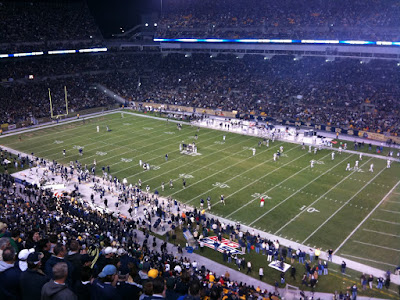 This weekend was brutal. I do picks in a few different places each week, the most obvious one being the Weekly Preview post I do here, and this week I was brutal. I hovered around 50%. Weak. In addition ND lost again and the Weis hot seat looks like the Ramallah Oil Fields on Day 2 of OIF. Painful. Anyway, here is how it all shook out.

Toledo 28 at Central Michigan 56- Dan LeFevour lives! I’ll be interested to see where he goes in the draft this year.

USF 0 at Rutgers 31- Talk about not showing up. The Bulls never got off the bus. Talk about the wrong pick!

West Virginia 21 at Cincinnati 24- The Mountaineers gave the Bearcats a run for their money on Friday night but didn’t have enough punch to finish the job. The Cincy trip to Pittsburgh in a couple of weeks will be very interesting.

Notre Dame 22 at Pittsburgh 27- I already covered this one so feel free to scroll down a post. In short, the Irish couldn’t quite pull off another 4th quarter comeback after falling behind but Golden Tate was out of his mind. He has skills.

Tennessee 17 at Ole Miss 42- Rough week for Lane Kiffin. He spent most of it dealing with his three freshmen stick up men, then topped it off by getting blasted by Houston Nutt and his merry band of pretenders.

Michigan 24 at Wisconsin 45- Rich Rodriguez is now 5-6 and must beat Ohio State to become bowl eligible. The ongoing investigation into his alleged demanding extra practice hours for his team also took a hit today when it became evident that the Wolverines failed to maintain player "workout logs." It is beginning to look more and more like Rodriguez may not survive year two. I wonder how many times a day it occurs to him that he should have never left West Virginia?

Florida 24 at South Carolina 14- Florida remains on a collision course with Alabama in the SEC title game.

Iowa 24 at Ohio State 27- As predicted the Hawkeyes came up short in this one but they did take the Bucks to OT. Ohio State doesn’t look great but they will be making yet another trip to the BCS. Will the Buckeye fans get off Tressel’s case now?

Nebraska 31 at Kansas 17- Look at the Huskers, quietly creeping towards a Big 12 North crown. Only Kansas State and Colorado remain on the Nebraska schedule.

Stanford 55 at USC 21- This was the shocker of the week. USC getting 50+ hung on them twice in three weeks just doesn’t happen. Not to mention what’s up with Stanford? All of a sudden they look like world beaters.

Texas Tech 17 at Oklahoma State 24- This was a really low scoring game for these two teams. Looks like Okie State will finish 2nd in the Big 12 South.