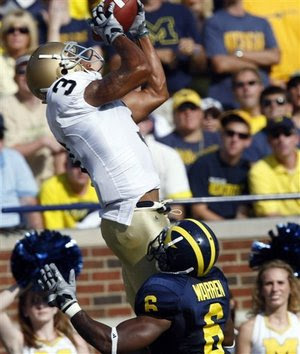 Notre Dame and Navy will meet for the 83rd consecutive season on Saturday at Notre Dame Stadium. This is one of my favorite games every year and I honestly don’t say that in jest. I have the utmost respect for all of our Service Academies and the fine young Americans that attend them but I am a little partial to the Naval Academy. Not only does Notre Dame have a special relationship with the Naval Academy but I have a fair amount of personal experience with Naval Academy graduates and have always found them to be high quality people across the board. I also actually enjoy watching the Mids play football. They are undersized and a step slow but that never stops them from mixing it up with anybody. I also enjoy watching Navy’s option offense, it reminds me of helping my Dad break down high school game films in the 80’s. Good stuff all around. Its hard for me not to like Navy, great kids, great fan base and a pretty good football team. I root for them 11 weeks a year with the one exception being this week. With that I’ll set about the business of answering the fine questions put forth by Charlie’s Nasties.

1. With all of the recent injuries, what scenario would you rather have? Option A: Dayne Crist out for the season, Trevor Robinson out indefinitely with an ankle sprain and Jimmy Clausen suffering week to week with turf toe OR Option B: All of the above players are 100% and Floyd is out for the year?

Talk about starting things off with a moral dilemma. I think I’ll avoid taking the bait on the grass is always greener Option B and stick with the reality of Option A. Michael Floyd is a serious shot in the arm for an already potent offense. Before he got hurt I thought he might be the best receiver in the country. In his absence I now think Golden Tate might be. Both of them should at least be in the conversation and it sure won’t hurt to have both of them back out there together again. With Rudolph running down the seam in between them opposing defenses are presented with a true pick your poison scenario. You can’t cover all three of those guys and I expect the offense to kick it up yet another notch with Floyd back in the Mix. As for Crist I sincerely hope his surgery goes well and he makes a speedy recovery. I won’t spool about that one too much until Clausen announces his intentions at the end of the season. The Irish need to get Robinson back in the mix as soon as possible and with a low ankle sprain the Pitt game should be a definite possibility. Clausen has done a great job of playing through the turf toe and I expect he’ll continue to do just that.

2. After experiencing our first neutral site game at San Antonio this week, it got me thinking about our upcoming off site game against Navy. What are your thoughts on playing Navy in Ireland in 2012? Should the 7-4-1 model take us abroad?

Are there any high end recruits there? Not that recruiting is the only reason for a neutral site game but I’ll avoid rehashing all that again this week. That said I don’t see much utility in this one. Don’t get me wrong it is kind of cool on general principle but neutral site games in Texas and Florida actually make more sense to me personally. I also don't like that it will be the 1st game of the season and followed by a bye week. Granted you need the bye week after traveling around the world but I'd rather see that bye in the middle of the season to heal guys up and recharge the batteries for the 2nd half. It loses its utility when you use it in week two. It will be good for some general publicity and a great excuse for some fans to go to Ireland and that’s about it.

3. Navy's unique offense and personnel always seem to test the Irish in some ways that other opponents don't. What position matchup are you most looking forward to this weekend?

This game is all about assignments but in my view of the world the most important matchup is right in the middle of the line of scrimmage. If Ian Williams, Ethan Johnson KLM and the rest of the interior defensive line rotation can take away the fullback dive the Irish will have a solid day on defense. Navy loves that quick hitter to the fullback and it can be lethal when they get it going. If the Irish can shut down the dive and extend the play down the line of scrimmage the rest of the defense can focus on cutting off Dobbs and the pitch man on the perimeter.

4. The Navy football stereotype is generally that the players are undersized and have less star power, but by emphasizing the fundamentals, minimizing mental errors, and playing as a team, they are always able to put up a fight. What position or player on Notre Dame's roster do you think could benefit from approaching games with this attitude?

I actually think this Notre Dame team has grown up considerably in the last two years and consistently showing up and playing with intensity really hasn’t been an issue for them. If I had to go with a position group it would have to be the secondary. In reality that’s been a mixed bag of scheme, fundamentals and blown assignments but it seems they have spent an inordinate amount of time this season in the recovery position. They won’t exactly get tested this week but if they get caught slipping one of the 8-10 passes that Navy throws could seriously burn them.

5. Everyone in the country saw that Navy took #6 Ohio State down to the wire in the opening week; how will the Midshipmen fare against the Irish? Predictions please.

I think the Irish will win this one comfortably on Saturday. With the reduced number of possessions that you get against Navy the offense won’t go completely berserk but I do expect them to put up at least 30 points. I also think this is the week the Irish will finally pick up some points from the defense or special teams. Just a hunch. As for Navy they’ll score a couple of touchdowns but the juniors and seniors on this Notre Dame team were in uniform when the Mids upset the Irish in 07’ and the sophomores were there last year when the Mids put together a furious comeback on a flurry of onside kicks. With those me
mories still fresh I think this year’s squad will ensure that there isn’t another repeat performance. Irish win 38-17.