Battle of the Alamo- The Good Guys Win This Time

Share All sharing options for: Battle of the Alamo- The Good Guys Win This Time 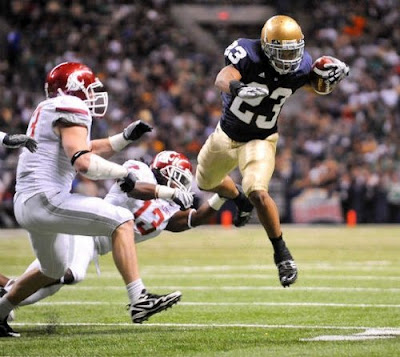 Texans have long revered the Alamo as the battle that took place there was the turning point in the Texas Revolution. In March of 1836 a couple hundred brave Texians defended the Mission against 1500 Mexican soldiers led by General Antonio Lopez de Santa Anna. In the end all but two of the Texians were brutally slaughtered by Santa Anna’s troops but the battle became a rallying cry. The Texians quickly regrouped and a few months later General Sam Houston routed Santa Anna at the Battle of San Jacinto and independence was won. In 1850 they took to calling themselves Texans and on that note I’ll stop regurgitating all the Texas History that was beaten into me by the Texas Public School System as a kid.

It went a little better than that for the Fighting Irish on Saturday night in the Alamodome, and no rallying cry will be required. The Irish prevailed over Washington State 40-14 in the Alamodome on a "fast track" artificial surface that was painted up to resemble the grass in Notre Dame Stadium. The controversial "barnstorming" game was definitely a little different in many respects and after watching it there were things I liked about it and things I didn’t. The most important upside is that the Irish picked up a relatively easy win against the worst team on this season’s schedule. It also sounds like the Irish fans that went to the game found it to be a great experience. Feel free to weigh in on the comments section with your thoughts on that one. Lastly if there were any solid recruiting inroads made as a result it was probably worth it. We likely won’t know the answer to that one in the immediate future but it would be nice to see Notre Dame regain a notch in the talent rich Texas pipeline.

On the down side it was odd watching a Notre Dame game with so many empty seats and that’s on the powers that be. I know you can’t predict such conflicts that far out but playing a game in Texas on a night where the Longhorns are playing their biggest game of the regular season at the same time is going to eliminate a few thousand curious sports fans that might have otherwise come out to the game because they stayed home to watch the Horns. I’m sure the ratings were brutal as well with Texas vs. Okie State, USC vs Oregon and the World Series all on in the same time slot. The one thing that I thought ND and the Alamodome could have done to sort of pull it out of the fire would have been to give the unused tickets to the service members stationed in the area. The city of San Diego mastered this technique years ago. If the Chargers or Padres are having attendance issues they start giving big blocks of tickets to Camp Pendleton and Miramar. You want to top off the stadium with some loud fans that will buy more beer than the 50k that paid for their tickets get 10,000 Marines in the house. They do the same thing for the Poinsettia and Holiday Bowls as well. When the Padres do it they even wear those heinous camouflage uniforms. Donating several thousand tickets to the local servicemembers would have been solid PR for Notre Dame, a nice bonus for the local military, and a big boost in beer sales for the Alamodome. Just saying. With that onto my observations about the actual game. I watched it once last night while sitting in the garage handing out candy and again this afternoon. Here’s what I’ve got.

Offensive Game Ball- Clausen, Tate and Hughes. Great performances all around.
Defensive Game Ball- The whole defensive line. After a shaky start to the season that unit has really come on strong and it is very nice to see.
Random Game Ball- Nick Tausch, you can’t put a price on reliability like that.

Overall, this was a nice comfortable win that sets the Irish up to control their own destiny down the stretch. If Robinson and Crist come out okay it will have been a solid trip overall.