The week in news- Fat Girlfriends, Castoffs and the Irish Awards Watch

Share All sharing options for: The week in news- Fat Girlfriends, Castoffs and the Irish Awards Watch 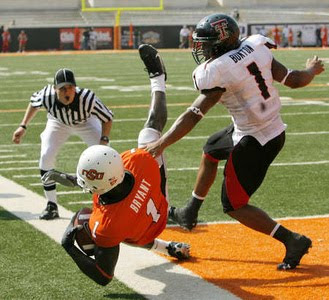 I haven't done a TWIN post in a couple of weeks due to a combination of real life schedule and a lack of anything that I found real interesting outside of the games themselves. I'm getting back on schedule this week and there are a couple of things I just couldn't pass up commenting on. So here goes the week in news....

The Dread Pirate Mike Leach has zero qualms about saying whatever pops into that completely insane head of his. This latest rant of his might be his most entertaining yet. This one is truly an instant classic.

Sam Bradford is officially done playing football for the Land Thieves. It sucks to see him go out like that and I sincerely hope he still manages to get back on track and go high in the first round of the NFL draft.

Dez Bryant on the other hand is a slightly different story. Okie State’s star wide receiver has been officially banned from the game for the rest of the season by the NCAA. In short Bryant will most likely never play another down at Boone’s house and will enter the NFL draft instead. This all came about because he lied to the NCAA about kicking it with former NFL star and OG "look at me" narcissist Deion Sanders. As shady as Deion is I can’t help but think that Reggie Bush is at home right now rolling around naked in a pile of $100 bills while laughing hysterically at the NCAA.
Michigan corner Boubacar Cissoko got kicked off the team by Dick Rod this week for missing meetings and workouts. Nice work. I wonder if the fact that he got torched by everyone he tried to cover played into it at all? Regardless Boubacar is likely coming to a MAC school near you.
Illinois fans rejoice, the Zooker will be back in 2010! I wonder how often Arrelious Benn sees Golden Tate highlights on Sports Center and has a road not taken moment?
The talented geniuses that run Double Xtra Point put together a sweet video roundup from last weekend that has a little of everything. It features Jimmy Clausen telling BC receiver Rich Gunnell to pack sand, Bob Griese commenting on how Nascar driver Juan Pablo Montoya is "out having a taco", and Lee Corso blurting out that Arkansas "shot their wad" during the Gameday broadcast. Nice.
UHND put together a great Notre Dame recruiting roundup this week that summarizes the state of affairs quite nicely. Strong.
Jimmy Clausen and Golden Tate continue to climb into a handful of post season awards watch lists and made the cut as semifinalists for the Davey O’Brien and Biletnikoff awards respectively. Her Loyal Sons put together a great post on the subject so I’ll leave the details to them. For what its worth Jimmy also jumped the WWL’s hero Tim Tebow on the WWL "Heisman Watch Expert’s Poll" this week claiming the #2 spot behind Alabama's Mark Ingram. Not that it means anything, but I was shocked to see Bristol drop their favorite son to #3.