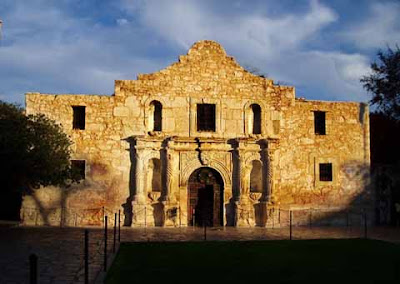 Halloween, The Alamo and Notre Dame football. Despite having been on the receiving end of several Texas history lessons growing up I can honestly say those are three things I never thought I would mention in the same sentence. But with the Irish preparing to travel to San Antonio to face off with the hapless Washington State Cougars this Saturday I now have reason to. After another hard fought victory against Boston College the Irish can get to 6-2 before heading into the November home stretch with a victory in the Alamodome. Notre Dame currently sits at #23 in the BCS rankings and could definitely climb the rankings into BCS eligibility if they win out. Much is at stake in every game remaining on the schedule.

As the host of this week’s edition of the IBG I will link the posts of the other IBG members at the bottom of this one as they complete them over the next couple of days. As all of the other members consistently display a deadly combination of skills, insight and wit it will be worth checking back to see what they have to say. With that I will get to the business of answering my own questions.

1. The 7-4-1 scheduling model has been the subject of much heated debate amongst Irish fans since it was first announced back in 2006. This week the Fighting Irish will play the first neutral site "barnstorming game" in said model so now is as good of a time as any to weigh in on the controversial subject. What do you think about a) 7-4-1 as a whole, b) the neutral site/ barnstorming game in general and c) specifically playing Washington State in San Antonio.

a) I’m not a big fan of the 7-4-1 model. That said I’m also not of the opinion the Irish need to be playing 12 games each season against the Top 20. But in the modern era of college football the only way to really get quality matchups against even mid level teams from BCS conferences is to set up home and home contracts. Under 7-4-1 the Irish are essentially forced to play 4 "buy game" type opponents per season, 3 in Notre Dame Stadium and one in the "barnstorming game." With the majority of the remaining home and home deals locked up with the traditional long term opponents it prevents added flexibility to schedule other interesting matchups. As an Independent I think the goal should be to play at least one team from every BCS conference per season. Scaling back to 6-5-1 would add two additional home and home possibilities that could be filled with more non-traditional opponents from the Big 12 and SEC, and drop the "buy games" from 4 to 2. That doesn’t mean you have to go with the juggernauts but home and home deals with say Arkansas and Texas A&M; sound more interesting than "buy games" against Tulsa and Western Michigan.

b) I actually like the concept of the neutral site/ barnstorming game quite a bit for a few reasons. For starters it’s a great way to generate some buzz in different parts of the country that boast very fertile recruiting ground. Texas is a perfect place to try and really reestablish a foothold. I also like that it gives some Notre Dame fans that might not otherwise have an opportunity to ever take in a Notre Dame game a chance to see one. Finally I just like that it gives Irish fans a good excuse to say hell with it and go spend the weekend having a good time and catching a Notre Dame game in a different city during the year. We all spend too much time working and getting caught up in day to day life, myself included. I try and keep my college football habit to one live game per month during the regular season and were it not for my desire to see B.C. go down and living within driving distance of Pittsburgh I would have probably jumped on this one.

c) I’m a huge fan of San Antonio so from that aspect I think it’s a great city. The Alamodome itself isn’t the greatest football venue but the Riverwalk is tough to beat. I’m sure it will be a great scene on Saturday night. I have never been to San Antonio and not had a great time. As for playing Wazzu I could honestly go for a comfortable victory at this point in the season.

2. I have personally had this game circled on the schedule for quite some time as the one "sure thing." After the last few games I have really been looking forward to a drama free victory. As luck would have it I started looking at the Cougars more closely this morning and it appears that freshman quarterback Jeff Tuel went 28 of 42 for 354 yards and 2 TD’s in a losing effort against Cal over the weekend. With the Irish secondary still struggling to get it together what are the chances that yet another freshman signal caller makes this one way more interesting than it should be on Saturday night in San Antonio?

Despite the success of young Tuel against the Cal second string I still anticipate a comfortable victory for the Irish. The Cougars rank at the bottom of almost every statistical category and their defense is especially inept. The Notre Dame offense should have zero issues scoring at will in this one. As for the defense I actually hope the Cougars try to air it out some. I think the Notre Dame front seven will be successful in shutting down the run and keeping Tuel under duress which should create several opportunities for the secondary to work on their "pass, ball, oskie" drills. It also provides a good dry run for the new look secondary as the team enters the home stretch.

3. Assuming that the Fighting Irish are able to take care of business and put this one away early what non-starters would you most like to see get some reps this week? Why?

For me it is Matt Romine and Taylor Dever. The Irish will lose Offensive Tackles Sam Young, Paul Duncan and Center Eric Olson after this season. Assuming that Dan Wenger is granted a 5th year by the university he should fill back in at Center where he previously started, mitigating the loss of Olson. But as the current #2’s at the Offensive Tackle positions Romine and Dever need as many game reps as possible before next September. I hope to see a lot of both of them on Saturday. I would also like to see Crist get some reps at QB and Zeke Motta to see some quality time at Strong Safety as well.

4. With the game being played on Halloween Night chances are that if you are not traveling to San Antonio you most likely have a scheduling conflict. Whether you are supposed to be at a party dressed as Fat Elvis, taking your kids trick-or-treating or just dealing with your doorbell ringing nonstop how do you plan to watch the game? If you are going what are you most looking forward to?

After a short negotiation with the Mrs. I have a workable plan. She’s going to take our 7 year old daughter out trick-or-treating and I’ll stay home with our little guy to hand out candy until she gets back. I’m going to run a TV out into the garage and set up shop there. No kids get candy during plays unless the little guy takes care of it but he's almost two so he can probably handle it. All that should put me back in the living room with no distractions by the start of the second half. I always DVR the games for a closer review late Saturday night or Sunday anyway, so worst case I’ll be able to fill in the holes after the fact that way.

I expect the Irish to deliver us a treat and win this one comfortably. I sincerely hope that Coach Weis doesn’t go all NFL on us and keep this one too conservative. Both the team and the fan base could use a theraputic 50 point victory so I hope the boys come out with both guns blazing and do just that. Realistically I think 42-10 is probably more like it. It just isn’t in the Weis makeup to run it up too much.

Her Loyal Sons- domer.mq isn't buying any of this 7-4-1 business.

Subway Domer- The master of the IBG will fight through a groin pull to watch the Irish.

Charlie's Nasties- Pops is ready to watch a comfortable win then hit the costume parties.

Brawling Hibernian- He'll keep an eye on the game while hitting the bars in Boston.