Share All sharing options for: Week 8 Wrap Up- Adventures In South Bend 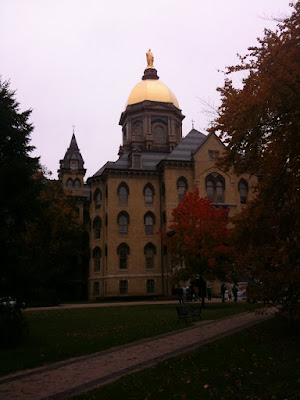 After traveling to South Bend for the weekend I’m a day late on this one so I’ll give it to you fast and furious so I can get back on schedule for the week.

Tulsa 24 at UTEP 28- Having now knocked off Houston and Tulsa the Miners are apparently only capable of beating CUSA opponents that they aren’t supposed to.

Florida State 30 at North Carolina 27- Big win for Bobby Bowden here. The Noles are still only 3-4 but 2-5 might have incited a riot in Tallahassee.

Rutgers 27 at Army 10- I was keeping an eye on this one while drinking beers in South Bend Friday night. Bottom line Rutgers is not very good. Despite this the commentators kept making comments about how great Schiano is. Whatever.

Boston College 16 at Notre Dame 20- It wasn’t pretty but this was an important win for Notre Dame. Coming up with a victory one week removed from a heartbreaking finish against USC took a lot but in the end the Irish found a way to get it done. If this team is going to sneak into the BCS there is no margin for error going forward and shaking the BC monkey to get to 5-2 was significant. Here are my observations from the stands.

-I liked the shakeup in the secondary though it didn’t prove to be near as fruitful as I had hoped. In short there is an obvious issue with defenders releasing receivers into another part of the zone and those receivers not getting picked up. These kids also seem to live in the recovery position and as a result rarely look back to find the ball. That said Kyle McCarthy did capitalize with two interceptions that were both very important.
-The front seven was outstanding against the run. This group has come a long way very quickly. Kapron Lewis-Moore, Ethan Johnson and Ian Williams all played very well. Darius Fleming also generated good pressure off the edge despite getting held on every play. I can’t complain too much about the holding calls as the front seven laid several licks on Shinskie that I thought were going to draw late hit penalties and never did. I felt like for the most part the refs let the kids play.
-Manti Te’o led the team with 9 tackles and Brian Smith also had 6 with a fumble recovery and an interception. Good effort from the linebackers. In my opinion Manti Te’o is probably the best player on the defense. Now having seen him live I can say that young Manti is definitely serious. He is always around the ball and drops the hammer when he gets there. Impressive.
-Overall the defense held BC to 14 points and ultimately won the game but the issues in the secondary need to get fixed ASAP to win out.
-The offense struggled in the red zone which made the game considerably closer than it should have been. You have to be able to convert from the 1 yard line period.
-Clausen was patient and for him had a pretty good day overall. The intentional grounding safety was his second suspect play of the year but it’s hard to knock a kid that has numbers as solid as Clausen does. His arm strength and accuracy continue to impress me. He throws the out to the wide side of the field as well as I’ve ever seen.
-Golden Tate is a freak of nature. Unfortunately he spent the majority of the day lined up in the slot double covered. I kept thinking he would move around more than he did but at the end of the day he scored both Irish TD’s anyway.
-Duval Kamara had a solid game hauling in 7 passes for 60 yards. It was good to see him bounce back.
-The punting needs to get better quickly. Bad punts contributed greatly to the Irish playing a significant portion of the game on their end of the field.
-As for Clausen and BC’s Rich Gunnell getting into it after the game I am fairly certain I witnessed the beginning of that about 30 minutes prior to kickoff. The Irish were in the early stages of warmups during the portion where the QBs throw passes to all the skill players up each sideline. Clausen was on the right sideline at that point and the BC players were running past him on the way to the south endzone. I just happened to look over and see one of the BC players slap the ball out of Clausen’s hand as he was running by and a brief exchange ensued. Who knows what if anything Jimmy was saying to the BC players as they were running by but slapping the ball out of his hand appeared to be unprompted. Who knows.

Offensive Game Ball- Golden Tate. Despite getting ample attention Tate still got loose for the only two Irish TD’s of the game. Strong.
Defensive Game Ball- Manti Te’o. The freshman had nine tackles and was very disruptive all over the field. I was more impressed with him than anyone else on the defense Saturday.

Overall the Irish are in pretty decent shape at 5-2. This weekend’s contest with Wazzu is theoretically the easiest game on the schedule and Floyd could be back on the field for the home stretch in November. That will open the offense back up and provide some extra fire power down the stretch. If the secondary can just get a little bit better winning out is very possible.

Tennessee 10 at Alabama 12- Tennessee missed 1 field goal and Mount Cody blocked 2 others to include the final kick of the game. This was truly a narrow escape for the Tide.

Oregon 43 at Washington 19- We’ll find out how good Oregon really is
this weekend against USC.

Clemson 40 at Miami 37- This was a welcome surprise. The Jacory Harris for Heisman business was just starting to percolate on the WWL again.

Oklahoma 35 at Kansas 13- Kansas never had a chance.

Iowa 15 at Michigan State 13- Sparty had Iowa on the ropes then let Stanzi throw a TD pass on fourth down to end the game. I still think if Iowa played USC in the Rose Bowl tomorrow they would lose by 4 touchdowns.

Texas A&M; 52 at Texas Tech 30- Big Sherm flipped this one upside down on its head. I fully expected the Red Raiders to Hang 50 plus on TAMU not vice versa. Blowing this one is a vintage Texas Tech move. Now watch them bounce back and smoke Kansas next Saturday.

Florida 29 at Mississippi State 19- This was a narrow escape for a Florida team that continues to look a little off. The Gators were the beneficiaries of a free touchdown in the 4th quarter after replay officials failed to reverse a TD scored by linebacker Dustin Doe after an interception. Doe was clearly stripped of the football while in mid celebratory touchdown prance at the 1 yard line. Media darling Tim Tebow threw two pick sixes and looked generally flustered all night. It will be interesting to see how the Gators look this Saturday against Georgia.

Auburn 10 at LSU31- This one quickly turned into a non-contest. LSU is hanging around on the fringe of the BCS discussion.

Texas 41 at Missouri 7- Mizzu went to 0-3 in conference play in this one and Texas got one step closer to playing for all the marbles. A road trip to Stillwater next weekend is likely the last real obstacle between the Horns and a title shot.