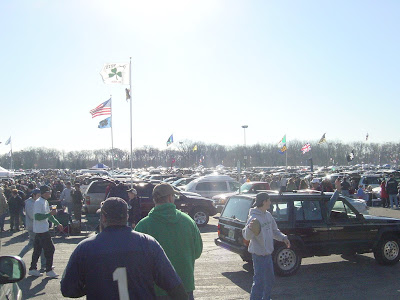 After a rough Saturday on the couch I’ll be enjoying what I like to call "Man Weekend" in the friendly confines of South Bend, Indiana this weekend. For the last few years my Dad "The Coach" has hosted a small gathering of college football hard cores at his house in Texas where we watch all the games and decimate many cases, a pile of assorted tobacco products, two cows worth of barbecue brisket, several dozen tortillas and a bucket of homemade hot sauce. It’s tough to beat that action but this year we are taking the show on the road. It should be a great weekend that is hopefully capped off with the Irish getting back on track by snapping a six game losing streak to Boston College. With that here are the other games I’m interested in this week but probably won’t get around to watching as I’ll be otherwise engaged on the Notre Dame campus.

Wednesday 21 October
Tulsa at UTEP- I’m still annoyed with Tulsa for not finishing off Boise State. That said there is no telling what you are going to get from UTEP on a weekly basis. Thus far the Miners are 2-4 but did knock off Houston in a crazy shootout two weeks ago. Flip a coin on this one but it beats watching whatever reality show BS the wife has going on Wednesday night.

Thursday 22 October
Florida State at North Carolina- Can Bobby Bowden get the Noles back on track in Chapel Hill? It is possible as the Heels defense is ranked #3 in the country but their offense is only ranked #117 in the country. This sets up to be a low scoring affair that the Noles really need to get back on track. I’ll give the Noles the benefit of the doubt that they can get it done.

Friday 23 October
Rutgers at Army- Two Friday games in a row for Greg Schiano’s bunch. I’m thinking the Scarlet Knights pull this one off, Army is terrible.

Saturday 24 October
Minnesota at Ohio State- This is interesting since the Bucks forgot to get off the bus at Ross-Ade last Saturday. I’m thinking the Sweatervest regroups his boys at home. I can't believe Ohio State fans are all over his case by the way. Build a statue of the guy and count your blessings already.

Illinois at Purdue- The Zooker will try his hand at the unpredictable universe that is Ross-Ade stadium this Saturday. I’m thinking it will work out for the Illini much like it did for Ohio State last Saturday. Is Juice still on the bench?

Tennessee at Alabama- The Vols will be lucky to score in this one. Roooolllllllll Tide.

Boston College at Notre Dame- The Eagles are riding a 6 game winning streak over the Irish heading into this one. The Irish need to bounce back from an emotional loss against USC and Boston College should be good enough to get their attention. Not to mention the fact that BC is the jinx where the Irish are concerned. BC has decent running game and a completely suspect QB in 26 year old Freshman David Shinskie. The Irish need to slow the run and make Shinskie try to beat them. Sound familiar? I am confident that the Notre Dame front seven will hold up their end of the deal and hope to see the secondary look a little better than they did last week against USC. The up side is that BC has nowhere near the athletes that the Trojans do so if for no other reason that should make this a feasible assignment for the defense. As for the BC defense I don’t think they will have an answer for Clausen and company who are by far the most potent offense the Eagles will have seen yet this season. I will be in attendance at this one and expect to see the Irish take care of business. Two weeks ago I went to Lane Stadium with the Deer Hunter to get eyes on BC during the Notre Dame bye week and came away with nothing as the Hokies completely dominated the Eagles for four quarters. At the half BC had 3 yards and QB David Shinskie was 0-9 with 2 picks to include a pick six. It was ugly. If the Irish make BC look at all like they did when I saw them at Lane Stadium two weeks ago I’ll be ecstatic.

Oregon at Washington- Washington is like the Arkansas of the Pac-10. They might finish as a .500 team but they are also capable of beating any other team in the conference any given week. Oregon has been hot since dropping their opener at Boise State but I won’t be surprised in the least of Sarkisian, Locker and co. beat the Ducks at Husky Stadium.

Clemson at Miami- This really shouldn’t be much of a game as Clemson is totally suspect. Canes roll.

Oklahoma at Kansas- Will the Sooners slip to 3-4? Can Kansas bounce back from a shocking first defeat at the hands of Colorado last weekend? I think the Sooners will hang 50 on Rock, Chalk Jayhawk to get back on the right side of .500.

Penn State at Michigan- Flip a coin on this one too, there is no telling what you might get out of Michigan on a weekly basis. If Forcier is back in business full time I’m liking Dick Rod’s chances here.

Iowa at Michigan State- I’m on Iowa loss watch if you haven’t noticed. In short they keep winning games by small margins in relatively unspectacular fashion. It has to happen sooner or later right? I like Dantonio to pull the upset here.

Texas A&M; at Texas Tech- The Aggies like to claim that Texas Tech isn’t their rival but that non-rival of theirs might hang a hundred on the Ags this Saturday as these two teams are heading in totally opposite directions at the moment. TAMU is on a 3 game skid and took it in the shorts big time last Saturday losing 62-14 to Kansas State! Interestingly Texas Tech beat Kansas State by a similar score of 66-14 two weeks ago. That coupled with the full on revolt that is happening in College Station doesn’t bode well for the Aggies. This should be an interesting game as the whole Mike Leach "Pirate" business sort of came to light as a result of this series as did the temporary Texas Tech tradition of throwing tortillas all over the field. I wrote a little piece on all that back in the spring if you need a refresher. You never know what the hell is going to happen when these two teams meet up in Lubbock but you can be it will be entertaining. As a side note I think Leach might seriously see if there are three digits underneath "Red Raiders" on the scoreboard. The Dread Pirate can't stand the Ags and would love nothing more than to completely embarrass them.

Florida at Mississippi State- On paper this looks like a blowout, but Dan Mullen is only one year removed from being the OC at Florida and will no doubt have a good game plan for the Gators. This one might be interesting as a result but Florida gets it done.

Auburn at LSU- Auburn was on fire then suffered back to back losses to Arkansas and Kentucky. These teams actually match up with each other in a way that it could be a tight game. I’m always up for Miles taking one in the shorts but LSU rarely loses night games at Red Stick. The Bayou Bengals will likely pull this one off in a nail biter too.

Texas at Missouri- Texas should win this game by four touchdowns. Mizzu has a seriously suspect defense and their offense is struggling to get back on track. I expect Jordan Shipley will be running down the sidelines a few times in this one.