Week 7 Wrap Up- Nobody is Safe

Share All sharing options for: Week 7 Wrap Up- Nobody is Safe 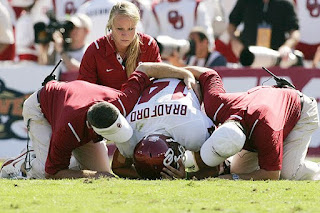 In my week 7 preview I talked about the Top 6 teams being on various stages of upset alert and the way it shook out 4 of them had narrow escapes and Virginia Tech lost. This weekend was a great reminder that you still have to play the games. All the rankings, prognostications and perceived greatness in the world mean little once the ball is in play. You still have to show up every week and get it done and that is not easy to do 12 times a season for anybody. The initial BCS standings also came out today so if you are interested here is the link. It is also down on my right side bar. Just follow the AP & USA Today Poll link, they are all there together.

Arkansas State 10 at Louisiana Monroe 16- Even I didn’t watch this one but it is nice to know we are back to having some college football on Tuesdays.

Boise State 28 at Tulsa 21- Boise State is an exciting small conference team but in my opinion they are not by any stretch a Top 5 team. The fact that they are #4 in the BCS standings with their schedule is damn near criminal. They are currently 3 spots ahead of USC. Seriously? They struggled to beat Tulsa on Thursday night and fortunately for the Broncos the Golden Hurricane were probably the toughest opponent they had left. We have Bob Stoops & Nick Saban to thank for this.

Cincinnati 34 at USF 17- The Big East is really not a good conference. Both of these teams came into this game at 5-0 and both looked very beatable. I still think the Bearcats will falter down the stretch but they open at #5 in the BCS standings.

Pitt 24 at Rutgers 17- Pitt is another Big East team that keeps plugging along in relatively unspectacular fashion as well. I hope they keep winning until the Irish come to town next month.

OU 13 at Texas 16- I’ll start by saying I honestly feel bad for Sam Bradford. How much money did this season cost him? His scenario also hurts college football as a whole as it will inevitably add to the number of players that leave early. It’s a Catch-22 for the kids but ultimately costs college football a little bit in the process. The Horns didn’t look spectacular but they did pick up an extremely important win against their arch rival that keeps them in the hunt for the BCS Championship. If the Horns can get through the next two weeks against Missouri and Oklahoma State they likely won’t lose the rest of the way. Like last season they control their own destiny as they currently sit at #3 in the BCS standings behind Florida and Alabama who are on a collision course in the SEC championship.

Iowa 20 at Wisconsin 10- The Hawkeyes continue to float on top of a Big Ten conference that still looks pretty mediocre as a whole. I don’t think they have quite enough guns to run the table but even if they do a few teams will have to falter for the Hawkeyes to represent the Big Ten in the BCS Championship as they currently sit at #6.

USC 34 at Notre Dame 27- The Irish took the Trojans to the wire but couldn’t quite pull off another magical finish. I already talked about this one at length so please scroll down one post if you so desire. No point rehashing the pain of that one again.

Arkansas 20 at Florida 23- Florida looked pretty vulnerable but was still good enough to overcome 4 turnovers and beat a pretty resilient Arkansas squad. I’m still a little fascinated with the Hogs and really think they could be a major player in the very near future. As for the Gators they control their own destiny at #1 in the BCS standings.

NC State 20 at Boston College 52- Where did this come from? A week ago I watched BC look absolutely pathetic against Virginia Tech. One week later they explode for 52 points and almost 300 yards rushing. It will be interesting to see which version of the Eagles show up in South Bend on Saturday.

Texas Tech 31 at Nebraska 10- What did I call Texas Tech in the week 7 preview the other day? Something like a wounded dog. Well they definitely bit the Huskers. I don’t know what part is more disturbing for Nebraska, their defense giving up 31 points or their offense only being able to manage 10 against a relatively suspect Texas Tech defense. This loss takes Nebraska from the North front runner to one more team with as many questions as answers heading into the second half of the season. Both of these teams still have a chance to be a factor going forward.

Virginia Tech 23 at Georgia Tech 28- The ACC Coastal just turned into a big mess as Virginia Tech, Georgia Tech and Miami have all beaten each other. The ACC Coastal is staring down the barrel of a likely tie breaker scenario similar to the one the Big 12 South had to deal with last year. Also like the 2008 Big 12 South these 3 teams are all better than any team in the Atlantic Division. Here is a link to the ACC divisional tie breaker rules. Needless to say they are a little involved.

South Carolina 6 at Alabama 20- Bama continues to look like the best team in the country and they do it in the most blue collar unexciting way possible. They play great defense and grind you down with a relentless pound it rushing attack. The Tide sit at #2 in the BCS Standings and will likely throw down with Florida in the SEC championship game for a title shot.

Missouri 17 at Oklahoma State 33-Okie State is still hanging around but still has to play Texas and Texas Tech. Missouri meanwhile is starting to look pretty mediocre. I’m not overly impressed with either of these teams at the moment despite their perceived offensive prowess.