I Can't Think About Anything Else

Share All sharing options for: I Can't Think About Anything Else 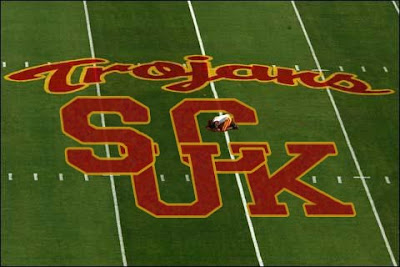 I feel like I haven’t been able to accomplish anything all week. I have a relatively intense career, a family and all the other day to day life stuff to deal with that anyone else has. I generally stay on top of it all by not sleeping much and going 90 miles per hour for 18 hours a day but not this week. I have slept less and my productivity has been well below average. I have this game on the brain big time. I usually do a "Week in News" post every Thursday Night but I’m skipping it this week. I don’t care who around the country is hurt, suspended or hanging out with Deion Sanders at the moment. Despite the fact that I really enjoy college football as a whole keeping an eye on any other game that starts at 3:30 or later on Saturday will be impossible.

I got an e-mail a couple of days ago from OFD regular commenter and long time friend Longhorn Mike. Longhorn Mike is a die hard Texas fan and one of my favorite people to talk college football with. With over 50 years of experience as die hard he is truly a wealth of knowledge on the game. I really appreciated his email because I feel the exact same way about the Notre Dame vs USC game!

Every year during this week I admit I steal my paycheck from my employer because this game is all I can think about.
Fu#@ OU

To say that I can relate would be a gross understatement. That said I do make an honest effort to keep these games in perspective. When I was younger the losses would get me pretty riled up. Thankfully I have had the opportunity to experience some things that helped me gain some perspective. I get fired up about the wins and I get pretty bummed out about the losses but not near to the extremes I once did. I also tend to look for the positives vice the negatives. It is all about progress. Not to mention that in my mid 30’s I can’t let emotions lead me to act like a total drunken idiot in front of the kids. It just doesn’t work that way.

That doesn't mean I'm not into it, I am extremely excited about this game. Games like this are the reason you spend 12 months a year on the message boards, recruiting sites, blogs and writing posts for a blog that only a couple of hundred people read. When I wake up Saturday morning I’m going to grab a cup of coffee, sit down on the couch with my 19 month old son and fire up the 1977 Notre Dame vs. USC game. He will be oblivious to the fact that he’s wearing a Notre Dame jersey with #1 on it, and he won’t understand much of anything I say to him when I start telling him about all the reasons that Saturday might be glorious. He will understand the word "football" which will prompt him to go grab his stuffed football with the interlocking "ND" on the side of it and play catch with me in the living room for a bit. The little guy is money from 5 yards by the way. With all of that going on I will be reminded of what it was like when I was in his shoes and I’ll call the Coach for the first of what will probably be 100 times that day to discuss the game. As the morning goes I will have to repeatedly remind myself, as I have all week, that no one game is a season. All will not be lost if the Irish falter, and all will not be gained if the Irish win. The fact that this team has a legitimate chance just two years removed from a 3-8 campaign says a lot about all involved and I am truly grateful for that. But damn it would sure be sweet to see them take that next giant step, especially at the expense of a great antagonist like USC. An Irish upset would create a wave of positive momentum the likes of which the program hasn't seen in quite some time. This team believes they can win and because of that anything is possible. I can’t wait. Go Irish!