Share All sharing options for: Week 7 Preview- The Storm 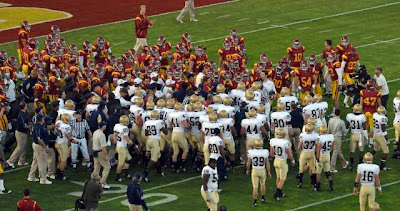 The storm is finally on the horizon and it will make be here in force on Saturday. There are several key matchups this weekend that could have significant effects on the national landscape. Every team in the top 6 is on varying degrees of upset alert and several other games are on tap that could have major ramifications in various conference races. It is time to batten down the hatches. I had a hard time narrowing down the list of games I’ll be trying to keep an eye on this weekend due to the sheer volume of great matchups and the fact that one of those games is particularly gigantic for the Fighting Irish. Overall it is setting up for quite the college football Saturday at my house. I can’t wait.

Tuesday 13 October
Arkansas State at Louisiana Monroe- There was a game on tonight! We now have college football Tuesday through Saturday!

Wednesday 14 October
Boise State at Tulsa- The Golden Hurricane have an outside shot at pulling a major upset in this one. The Broncos are favored by 8 but Tulsa has the ability to score points and could potentially turn this one into a shootout. Boise State is lurking on the fringe of an elusive BCS title game shot and won’t face another decent opponent until November 27th when they play host to Nevada. I think the Broncs will get it done this week and stay in the hunt. There will be plenty of time to debate whether or not they deserve it later.

Thursday 15 October
Cincinnati at USF- Both of these teams are 5-0 and attempting to make a claim that the Big East is a legitimate contender on the national landscape. I’m not buying into it personally but it should be an entertaining Thursday night game nonetheless. At a minimum this one is worthy of a 45 minute DVR review on Friday morning. I’ll take the Bulls at home in a close one.

Friday 16 October
Pitt at Rutgers- Pitt is another Big East team looking to stay in the conference title hunt and they need to knock off a one loss Rutgers squad to do so. Pitt is coming off of a narrow escape against UCONN and the Scarlet Knights have been off the radar beating up on patsies since losing to Cincy in week 1. I’m taking the Panthers in another narrow escape.

Saturday 17 October
OU at Texas (Dallas)- I really need to get to this game at some point. Playing one of college football’s greatest rivalry games at the Cotton Bowl on the Texas State Fairgrounds during the Texas State Fair is tough to beat. This one really sets up as an upset this year and will be a great test for the Longhorns. Oklahoma has suffered two losses but have Sam Bradford back under center. The natives will be restless if Big Game Bob starts out 3-3 and I expect his boys to do everything in their power to keep it from happening. On the other side of the field Texas controls their own destiny in the National Title race and must take care of business Saturday to keep doing so. Both teams have a lot to play for in this one and I expect it to go down to the wire. I expect Texas to rise to the challenge and take care of business against the Land Thieves.

Iowa at Wisconsin- Iowa narrowly escaped with a win against Michigan last weekend and Wisconsin continuously shot themselves in the foot and found a way to lose at Ohio State. So which one of them will get it together and knock off the other guy this weekend? I like the Badgers to bounce back and eliminate the last undefeated team in the Big Ten in front of a hostile crowd at Camp Randall Stadium.

USC at Notre Dame- I talked about this one in detail yesterday so I won’t rehash it all here. Please scroll down one post if you want the full meal deal. The short version is that despite all the great games that will be played this Saturday this one is the game of the year at my house and I'm liking Notre Dame's chances. I will also have some further follow up comments in response to OC Domer’s IBG questions tomorrow.

Arkansas at Florida- The Gators survived a defensive struggle under the lights in Red Stick and return home to host Bobby Petrino and the Hogs fresh off an upset of Auburn. Arkansas really has a pretty weak defense but their offense will be the biggest test the Gator defense has faced yet. The Hogs have scored 41 or more points in four of their five games this season but were completely shut down and held to 7 points by Alabama. Can Florida’s defense do the same? It should make for an interesting test of the Gator defense. As much as I’d like to see the Hogs give Urban and Tebow a run for their money I’m sure the Gators can keep this one nice and comfortable in The Swamp.

NC State at Boston College- I’ll only keep an eye on this one just to see if BC can recover at all from that total shellacking they took in Blacksburg on Saturday. This one is a coin flip.

Texas Tech at Nebraska- With Taylor Potts banged up the Dread Pirate inserted Stephen Sheffield at quarterback on Saturday and the latest Leach gunslinger proceeded to throw for 490 yards and 7 TD’s against Kansas State. In all fairness the K-State secondary looked like the Bad News Bears on the lowlight reel. Regardless the Raiders are a feast or famine type team and at this point in the season they should be treated like a wounded dog. They might look vulnerable and a little pathetic but they could also still unexpectedly jump up and maul your ass if you aren’t paying attention. Sheffield is all of 6-4 and a Buck 75 so it is very possible that Ndamukong Suh could be picking his teeth with the kid by halftime. Then again if the Raider offensive line can buy Sheffield enough time to hit whoever Nebraska safety Matt O’Hanlon is attempting to cover this one could be interesting. With the exception of O’Hanlon the Husker defense is serious, so despite the fact that Zac Lee is a little sketchy at QB I like the Huskers to win this one by grinding it out on the ground and bringing heavy pressure with Kong Suh in the middle. Much like he did in a torrential downpour at Mizzu last Thursday night Suh will treat the Raider offensive line like bowling pins in Lincoln Saturday afternoon.

Virginia Tech at Georgia Tech- The Yellow Jackets represent the last real test on the schedule for Frank Beamer’s Hokies. If the Fighting Gobblers can pull this one off they should cruise into the ACC title game uncontested where they will face the champion of a very weak Atlantic Division. If the Hokies win out and Texas falters down the stretch Beamer and his boys could slide into a title shot. Knowing what is at stake here I like Bud Foster to make sure his defense is ready to keep Paul Johnson in check and spearhead a Hokie victory. I can hear the Deer Hunter screaming "Go Hokies" already.

South Carolina at Alabama- Steve Spurrier hasn’t done much of anything truly significant since taking over at South Carolina but he’s definitely got a chance to this Saturday. His Gamecocks have actually looked pretty decent this season with their only loss coming in a 41-37 shootout against Georgia in week 2. I don’t think anyone can beat Bama at the moment but keep an eye on this one. It is definitely worthy of your second TV set.

Missouri at Oklahoma State- Both of these teams have high flying offenses and little to no defense. They might com
bine for 100 points on Saturday Night at Boone’s house. By the time this one comes on I’ll have the kids in bed and will be turning two on my ND vs USC post game write up but I’ll keep an eye on it nonetheless. I’ll take the Cowboys at home in a shootout.