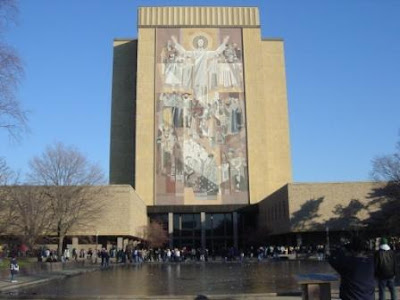 Like any other Irish fan I have had October 17th circled on my calendar since Christmas Day of 2008. We all knew then that this team just might turn the corner and what this game was going to represent. Let me back track for a minute first. The Coach and I were at the L.A. Coliseum in 2002 when Carson Palmer brought the Trojans back from a 13-10 deficit late in the second quarter and proceeded to win the Heisman at the expense of the Irish. That was rough, and it really hasn’t gotten any better since then. In the years that have followed Pete Carroll has led the Trojans back into the fold of college football’s elite and the annual contest against the Fighting Irish has become the barometer for where the Irish are, and more importantly for how far they have to go to get back on top. With the exception of the 2005 "Bush Push" game the Irish have not been able to compete with the Trojans since that night in 2002 with the last Irish victory in the series coming the year prior when a 5-6 Bob Davie team won 27-16 during Carroll’s inaugural campaign. USC represents the ultimate college football antagonist for Notre Dame fans and arguably for college football as a whole. Despite a litany of accusations that would impress Barry Switzer the Trojans have consistently recruited better than everyone else in the country and put a team on the field that consistently tends to dominate opponents. The only saving grace is the fact that they have maintained a habit of not showing up once a season and dropping a game that ultimately eliminates them from the National Title race. That habit and a kid named Vince Young have held Carroll to a single consensus National Title in 2004; though the Trojans did claim the AP National Title in 2003 as well. Any way you slice it there is no denying that the Trojans are on a hell of a run with no end in sight.

I hesitate to over emphasize the importance of a single game in a 12 game season but it is what it is and this game definitely has the potential to have a greater impact on this Notre Dame team and the program at large than any other game of the 2009 campaign for obvious reasons. This is one of the greatest rivalries in all of college football and the setting for this game just doesn’t get any better. There is much at stake for both teams and we are all aware of what those things are. Much will be said this week by the Media, the fans on the message boards and those of us out here in the blogosphere but as I look to Saturday I can’t help but remind myself of the Holtzism "You're never as good as everyone tells you when you win, and you're never as bad as they say when you lose." That is sage advice I will be trying to keep in mind when I write up my post game thoughts on Saturday night regardless of the outcome. As huge as it is I will try to keep it in perspective. That said there are several ways of looking at this game but like all major challenges this one is chock full of opportunity for the Irish. With a win the Irish would control their own BCS destiny, firmly plant Clausen into the Heisman race, stamp out the speculation about Weis’ immediate future and at least temporarily silence the talking heads. Coach Weis also has a stable of top flight recruits lined up to visit this weekend which adds yet another layer of potential impact. Could any 18 year old kid really not get swept up in the melee that would surely follow an Irish upset?

So what about the game? On paper the matchup is fairly cut and dried. Notre Dame has a top ten offense and USC has a top ten defense. That should be a fun battle to watch and a great test for both sides. USC has a top 25 rushing offense and a pretty mediocre passing offense led by a freshman quarterback. Notre Dame has a suspect "bend but don’t break" defense that has buckled down and made some huge stops when the chips were down in the last few weeks. On paper it would appear that USC should be able to control the clock with their rushing attack and keep Clausen and the Irish offense to a reasonable point total en-route to a Trojan victory. But the games aren’t played on paper and with Clausen under center this offense gives the Irish more than a puncher’s chance. Regardless of what side of the fence each individual may sit on with regards to Weis and this team you can bet that the whole of ND Nation will be whipped up into a frenzy come kickoff on Saturday and Notre Dame Stadium should be electric. From a USC perspective they need to establish the run right away, keep Clausen from getting into rhythm and take the crowd out of the game ASAP. The longer the Irish hang around in this one the greater the chance the Irish have to win. The Coach and I had a discussion about this yesterday and both had the same thoughts. Coach Tenuta has to sell out to stop the run and force the freshman quarterback to try and win the game for USC. In doing so the Irish secondary is going to have to play considerably better than they have all season and take advantage of Barkley’s mistakes. The Irish will obviously have to keep the mental mistakes to a minimum as penalties and turnovers will be a killer. The special teams also need to be special and with that I won’t waste any more time stating the obvious.

The bottom line is this. It really doesn’t matter what I think or what anyone else who throws their two cents out there this week thinks either. We will discuss it at length because we love it to varying degrees for various reasons. That is what being a fan is all about. But despite our varying opinions, expectations and hopes the only thing that really matters is whether or not the Notre Dame team that comes out of the tunnel on Saturday truly believes that they can win this game. If the Irish take the field on Saturday believing they can win and subsequently turn that belief into four quarters of inspired football it could be one of those games that goes down in Irish football legend. There are few things more dangerous than an underdog that believes in it. When that underdog is Notre Dame, at home, with a raucous crowd and the whole team believing it anything is possible. That is when the mystique becomes reality. This Notre Dame team believes.