Week 6 Wrap Up- Leveling the Field

Share All sharing options for: Week 6 Wrap Up- Leveling the Field 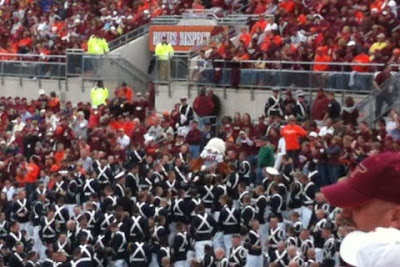 It was a pretty light slate of interesting games this weekend but I came away convinced of one thing. I don’t remember the playing field in college football ever being so level. On a weekly basis it is almost impossible to predict what will happen in the Big Ten and Pac 10 specifically. Each conference has about 6 teams that can all truly play with each other. I was looking at the new Top 25 polls yesterday afternoon and pretty much convinced myself that the same is true for college football as a whole. Florida, Texas, Alabama, Virginia Tech and USC would definitely be favored against any of the other Top 25 teams but can you really say the same for numbers 6-25? Any matchup between those teams is anybody’s ball game and those Top 5 teams aren’t really safe either. It all sets up for what should be a highly interesting stretch run that will likely result in several BCS appearances that no one predicted. Florida and Alabama appear to be on a collision course and Texas controls their own destiny. It will be very interesting to see what the initial BCS rankings look like when they hit the street this Sunday.

Middle Tennessee State 7 at Troy 31- We had football on Tuesday night, but even I didn’t watch this one. We start the Tuesday through Saturday routine tomorrow. There are games all week for the hard cores out there.

Nebraska 27 at Missouri 12- This was a huge win for Nebraska. The Huskers couldn’t do anything on offense for the first three quarters then Zac Lee hooked up with Niles Paul for a 56 yard TD and never looked back. The Nebraska defense was dominant in this one and Ndamukong Suh was an absolute wrecking machine for four quarters. In my opinion Suh is by far the best DT in the country and one could argue that he is perhaps the best player in the country. Bo Pelini calls Suh the best player he’s ever coached and I believe it, the dude is serious. As for the Husker offense Zac Lee was brutal for three quarters then serviceable in the 4th. The Huskers pose a fringe threat in the Big 12 and if they stay on track they could potentially give the Texas vs Oklahoma winner a scare in the Big 12 title game.

Louisiana Tech 14 at Nevada 37- The Wolfpack is getting back on track and probably represent the one true threat to Boise State at this point.

Auburn 23 at Arkansas 44- I thought the Hogs had an upset or two in them this season and they picked up the first one on Saturday by dismantling Auburn. They might throw another couple of wrenches in the works before the season is over.

Boston College 14 at Virginia Tech 48- We spent the long weekend with the wife’s family in Blacksburg and went to Lane Stadium to see this one. We had a great time tailgating but I don’t remember ever going to a less interesting football game. The two most interesting things that happened were watching Baldwin the Eagle body surf the Corps of Cadets and noticing that VT has a male flag girl. As for the game the Hokies absolutely dismantled BC who looked like they never got off the bus. At the half BC had 3 total yards and Shinskie was 0-9 with 2 interceptions to include a pick six. It was ugly. Both BC touchdowns were against the second and third string long after VT had taken their foot off the gas. The Hokies could have won this one 70-0 had they really wanted to. Early in the season I thought the VT offense was brutal but now I'm more of the opinion that Alabama and Nebraska just have very good defenses. I walked out of Lane Stadium thinking how annoyed I’ll be if BC shows up in South Bend in two weeks and give the Irish a game! I’ll be at that one too.

Alabama 22 at Ole Miss 3- Alabama looks like the best team in the country right now. They play great defense and just wear you out at the line of scrimmage on both sides of the ball. They aren’t particularly flashy they just get it done. If they played Florida tomorrow I would bet on Bama. As for Ole Miss those preseason rankings and expectations are a distant memory.

Wisconsin 13 at Ohio State 31- The Badgers dominated Ohio State statistically but surrendered 21 points on two pick sixes and a 96 yard kick return to find a way to lose at the Horseshoe. There are a handful of pretty good yet very beatable teams jockeying for position in the Big Ten and at this point and there is no telling who will show up in Pasadena as the Big Ten representative when it all comes out in the wash.

Colorado 14 at Texas 38- Texas looked out of sorts again for a while then exploded in
the second half to put the Buffs away. Dan Hawkins has officially benched his son Cody at QB for now and the clock continues to count down on Hawkins watch. As for the Horns Jordan Shipley continues to carry the load and look more like game changer than his Heisman Candidate roommate Colt McCoy. The Horns will have to play much better to win the Red River Shootout this coming Saturday.

Florida 13 at LSU 3- If LSU had a quarterback…. I know, I know it is what it is. Bottom line Florida has a great defense and with John Chavis at the helm LSU has a pretty decent defense too. I really wish the SEC would play more quality non-conference games so we could get a better feel for how good they really are. With all of them run-ruling inferior competition out of conference I start wondering how good they really are at times. Do they have all of us Jedi mind-tricked? They play each other in some pretty interesting games but there isn’t much of a barometer against the rest of the country. Didn’t Washington hang like 450 yards of offense on this LSU defense in week 1? As for Florida they will likely roll through the rest of their schedule uncontested but Bama looms on the horizon in the SEC title game. I almost wish ESPN would flex their muscle and just go ahead and force the Heisman Trust to give Tebow the trophy now so they can stop ramming it down our throats. He’s a great talent with a great supporting cast and pretty ordinary numbers. Get off him already. If Brantley replaced him tomorrow I don’t think the Gators would miss a beat. I expect a full on rebuttal from OFD regular commenter Dimes on this one!

Michigan 28 at Iowa 30- Rich Rodriguez might have made the worst coaching decision I’ve seen this year when he trotted Denard Robinson out under center to try and win the game on the final possession. Hasn’t Forcier proved he’s the guy to go to in that situation? Especially when you need to throw? Robinson threw a pick in short order and the Wolverines came up short. They are loving that one in Ann Arbor. As for Iowa they are totally beatable and won’t survive the season undefeated.

Georgia Tech 49 at Florida State 44- This was the craziest game of the weekend. After getting delayed a couple of hours for a lightning storm this contest went on well into the early morning hours. I actually felt a little bad for Bobby Bowden when it was over. The writing is on the wall for the Bowden era coming to an end. As for Georgia Tech they remain the last true threat to Virginia Tech in the